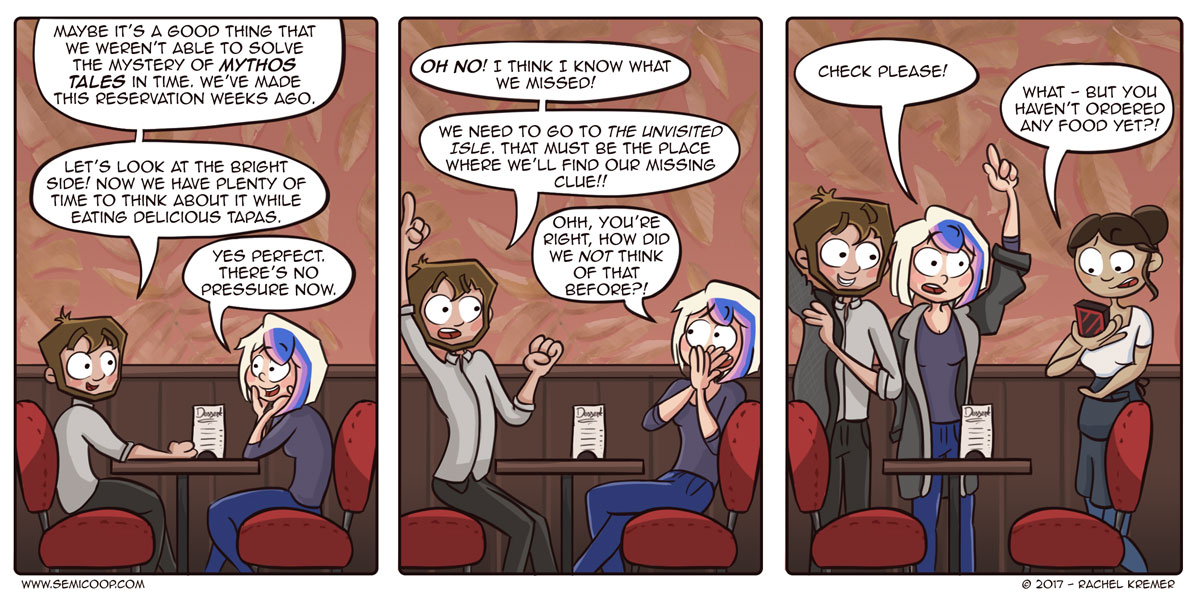 This happened to us. We tried solving the case we were working on in Mythos Tales, but we did not finish in time and we had to go to the restaurant. Within 15 minutes we realised where we had to go! Of course we didn’t really leave the restaurant and we enjoyed a lovely diner for multiple hours and finished the case later that evening. 😉 But there was this constant nagging feeling of curiousity of how the story would progress.

We’re loving the game so far, although there are quite some errors that are a little frustrating. Locations that you apparently could have visited, but they were not in the directory or on the map – so you could not have known. Nonetheless it’s a lovely puzzle mystery game that has quite more depth to it than its older brother Sherlock Holmes: Consulting Detective. Which has a new standalone expansion Jack the Ripper & West End Adventures which we’d love to try after finishing Mythos Tales.

Yesterday we played Eldritch Horror again, which we like to play 2 or 3 times a year. That actually is more than enough for us. We now have The Dreamlands expansion and we must admit that it’s a really interesting addition to the game. NOT JUST BECAUSE OF THE TERRIBLY CUTE TENTACLE KITTY ICON. It does some interesting things with adventure cards in which you have to make choices, followed by die rolling tests instead of purely rolling dice and see if you make it or not. We also think that we’re now officialy done with Eldritch Horror Expansions, we now own Forsaken Lore, Mountains of Madness, Signs of Carcosa and The Dreamlands. We feel like that is enough. Besides the practical fact that our awesome chest is full, we don’t feel like the game needs more.

Do ever take games with you to a restaurant, if yes, which one?

cool chest! witch restaurant did you go to?
bringing games to a restaurant sounds like a bad idea, if i would bring somthing, it would be smal and real fast.
like the tiny tin for love letter.

No games in restaurants for me, apart from contract bridge in my collegeyears.

I’m extremely interested in SH Consulting Detective as a Coop. Where does Mythos Tales shine compared to the old but very bright lady? (I mostly view games as female for some reason)

It’s really an evolution of the format. SH Consulting made us meta-game the mystery a lot, so a lot of the deduction aspect is as much about how the game system work as the mystery it self. Thoughts like:
“In real life it would be logical if this witness would know about this detail, but the witness was mentioned at the start of the game and this detail is revealed much later, so the witness probably won’t give out that information because of the pacing of the story”.
Mythos tales solves this problem by giving you requirement cards, which means that if you have certain knowledge that witness might have an extra text passage that talks about that later given detail.

Some location are also influenced if you visit them during the day of the night, which is nice but sometimes breaks the immersion on the more generic texts but that’s fine.

So it’s still not perfect in it’s execution and the proof reading is sloppy, but it has some really nice additions on top of the SH system.

Thanks, those requirement cards sounds like an improvement, although I can imagine it makes things more linear as well (noticing you cannot read all the text because you don’t have the requirement card might be frustrating).

Lovecraft is a taste I’ve yet to acquire and I assume my wife never will, so perhaps I’ll stick to SHCD first. But it’s on my wishlist thanks to you.

I’ve taken small games to restaurants before, such as Love Letter or Epic PVP, that are going to play quick and give us something to do while waiting.

Of course, there are the odd occassions where I have gone out with friends to a restaurant to play pen and paper RPGs, which are a whole ‘nother kettle of fish.

…I will also refuse to confirm or deny that rulebooks for various minis and pen and paper games are favored reading materials of mine at restaurants.

I take small games with me to restaurants. Hive pocket, Control, Zombie Dice, ect. I’m hoping that Chocobo’s crystal hunt will be small enough to be a carry on game, and I’m always looking for more pocket games to pick up.

I love both the development changes in Mythos Tales, compared to SH:CD (events depending on parts of the day, and previous visits – especially the latter), however the errors annoy the game spirit out of me… 🙁 Wish they had tested it more! Also, we have just finished the second story (Flesh and Blood), and we got a measly 1 points, which sucks – I can accept if I lose because I played stupid, but in my opinion,
!!!SPOILERS!!!
it was not very logical to visit the taxi guy, and completely illogical to visit the Silver Twilight guy (who is the main key to the mystery, I think). Meanwhile, the folklore expert and the bureau guy with the register are no help (before meeting the ST guy), and even finding the fricking monster himself does not do a lot of good for the investigation (very few points, losing time, no further leads). Also, even the parts-of-the-day-give-different-events is sometimes illogical, as in the dormitory for example, where during the day you can’t go in, but in the evening you just enter and go up two floors for no apparent reason?…
!!!END OF SPOILERS!!!

To all in all, I think that developments in the mechanics are necessary and justified, but up until now (first 2 stories) they are not properly utilised yet.

As one who has been a server at a restaurant, along with having a deep love of board games, it’s a delicate thing to pull off.

At least in the United States, the vast majority of a server’s income comes from the tips they receive from their tables. So it’s important to be aware of this before you aim to settle in for a gyro and a good ol’ Cyclades marathon.

Is it busy? Well, that big table you’ve spent the last three hours with a $50 tab between the three or four of you could have been turned over three or four times. This is a bug cut on that server’s potential income for the day.

Is it not busy? Those few people who are sharing the space with you might all be looking to have a nice, quiet, relaxing meal. The unavoidable random outbursts when dice rolls go crazy can also be in bad form.

In my opinion, stick to the bar, or at least the bar area, where noise and fun and boisterousness are more the norm, not to mention planting yourself in a spot for hours on end is generally accepted. Feel like you’re overstaying? Just order another round of drinks!

Personally, I’m a big fan of two-player games when at the bar:
1) It’s hard to wrangle more than that out of your friends to give you enough undivided attention to learn and play.
2) It’s easier to claim the necessary real estate without being a nuisance.
3) You’re usually dealing with simple components, and that means quick set up and tear down … not to mention easier to protect from *GASP* the attack of a spill or sticky table surface!! (Don’t leave home without game mats and card sleeves!)
4) More often than not, passersby are intrigued and stop by to observe and inquire what it is we could possibly be doing. I think this is great, seeing someone light up at the sight of a game that isn’t chess or checkers or Monopoly for the first time. Just don’t be that guy who, after having too many, thinks because two people were nice enough to take a moment to greet you and answer your question now, in the middle of their pitched and focused battle, want to suddenly abandon it and spend the rest of the night having you talk at them. Go away. XD

I wouldn’t really take any games with me to a restaurant, due to a fear of losing bits and pieces.

Just out of curiosity, how big is the table in the photos where you have EH set up?

Valid point about losing components! I believe the table is a standard sized 90 x 200 cm.

That is standard size? Around here we had quite some difficulties finding a table that will hold EH nicely, but with a stroke of luck found one of 95*200.

Still have to say that the chest and everything looks so very good!

In Mythos tales you play investigators that help professor Armitage with solving some mysterious cases. Read the newspapers, visit the crime scene and talk to witnesses to learn more about what happened and try to answer all of Armitage's questions as best as you can to win the game. But remember that this game is set in the Lovecraftion world of Arkham, so strange things might occur which can haunt your dreams and waking existence. Support us through affiliate links or visit and support your local game store! Amazon.com 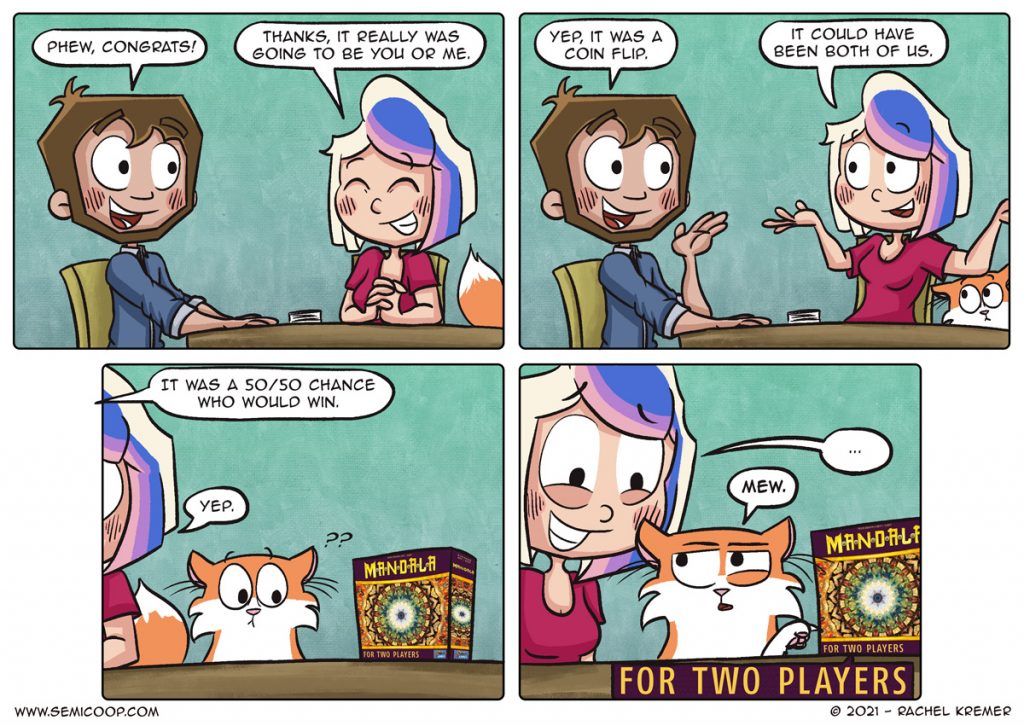