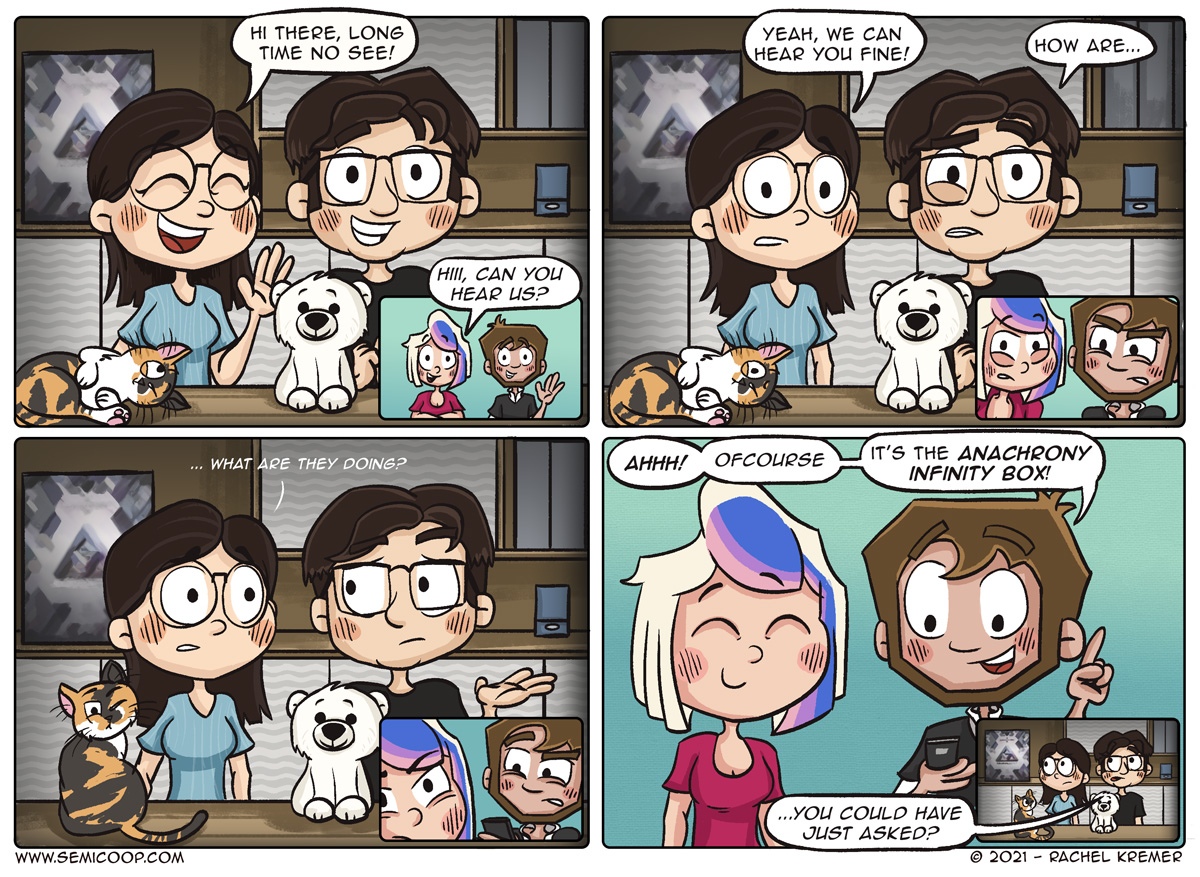 I’m going to have to keep this week’s blog post short because time is my nemesis… a shared nemesis with many other people I think. 😉

This comic is based on a tweet by Calvin Wong Tze Loon because, well, he was totally talking about us! Whenever we see a picture with game boxes in there, we always try to spot what games they are! This is also a lovely thing to do when video conferencing if you’re chatting with people that are into board games.

Last week was a very diverse week! We finally managed to buy a copy of Wildlands Ancients, the big expansion for Wildlands. One of the things it adds to the game is a co-op mode in which we’re really interested! We’ve only played it once and it was hard! We’re curious whether that was due to the combination of ancients we were using or if it’s just always that much of a challenge. We’ll see in future plays! We played a game of Wingspan, which is always relaxing, some Ticket To Ride: Amsterdam, Village Green, and Mandala, which are all highly recommended shorter games.

And… we played Netrunner! Yes, that’s right: NETRUNNER! Project Nisei has sparked our old love for Netrunner and we decided to build some (new) starter decks and just play it again. The last time we had played it, was back in 2017… gasp! The people behind Project Nisei are about to release a new starter pack for people who want to play Netrunner but can’t because the game is no longer in print. We’re so excited that the community behind Netrunner is still thriving – if you’re interested and would like to play a game, you can play it for free on Jinteki.net. 🙂

We participated in PinkAndGeek’s challenge and a real highlight was joining Bez her Friday stream! Bez is such a lovely person and we can’t wait to be back in their stream one day! If you’d like to see us chat away with Bez and her fun audience, check out last week’s Friendly Friday Forum episode!

Do you always need to check out what games there are in the background?

Not gonna lie, I didn’t read past the first panel, and I was already trying to figure out if it was the big fancy Anachrony box or the regular one!

I definitely do check games in the background on YouTube videos and the like, or when people show off their shelves. I like to also try and spot at least 10 of those games that I also own or have previously played.