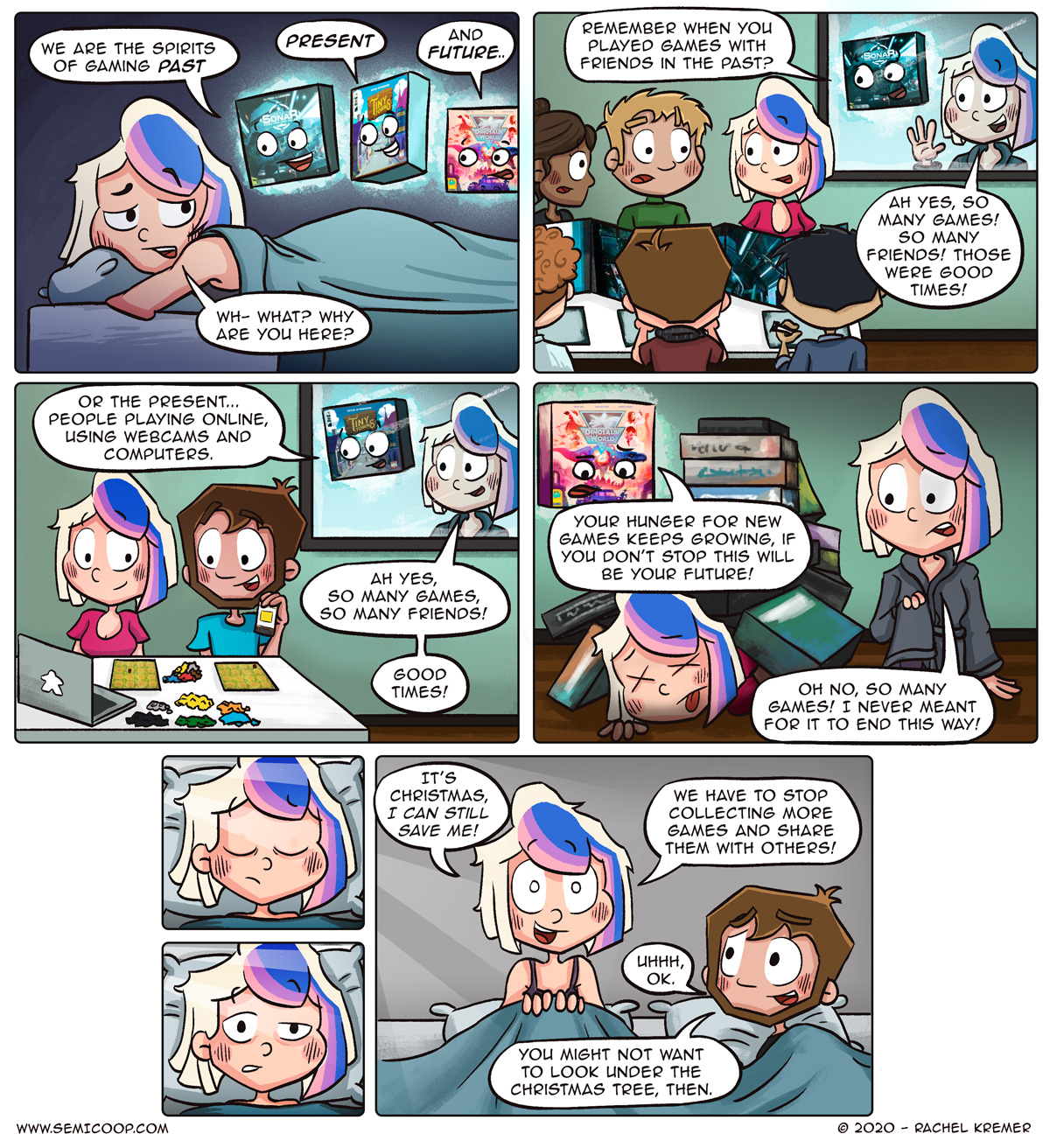 Happy holidays everybody! We hope that you are able to spin this normally festive period into something that celebrates the people that surround you and help each other to make the world feel a little brighter. Because 2020 changed everything in our daily lives, including games we thought it would be fun to have a little Christmas Carol-inspired comic, which posed some problems when we got to the spirit of gaming future as we have no clue what gaming would look like in 2021. For inspiration, we grabbed our ongoing attempt to cull our gaming collection which ground to halt now the Netherlands has entered a new lockdown. We are healthy and safe and we hope you are too.

Because everything, except grocery stores, is closed at the moment we have decided to spend our holiday taking it a little slower and mostly focus a bit on small projects in the house and playing some of the games that we think haven’t gotten the attention this year they deserve. Because of all the limited opportunity to have social interaction in 2020 we also have a chance to beat our “games played in a year” record which right now sits at 330 games. We’ve played 319 games so far with eleven days to go, so we think we can beat that, especially if we play some shorter games like Abandon All Artichokes.

This week we played some of our favorites like Tiny Towns, Gloomhaven and Calico as well as some new ones like Village Green and Merv: Heart of the Silk Road. While Osprey publishes both they couldn’t be more different. Village Green is a very puzzly card game about creating the best village green for your village, because of the theme it reminds us a bit of Arboretum but it’s a bit quicker. We enjoyed our three plays but the yellow cards are very hard to read which we hope will be solved in a future printing. Merv on the other hand is a much heavier economic game about gaining power through trading and protecting the city from the Mongols. We’ve played it two times now and we’re definitely going to play it a few more times as it feels like we haven’t completely figured out what the best strategies are because of the small intricacies of how the different tracks interact with each other.

This week we’re going to try Cubitos and Chai, which just arrived from Alderac and Steeped Games and we excited about both. We know Cubitos’s cover has had a diverse reaction from the public but we freaking love it and it seems that the absurdism of the cover is continued in the box so that should be a good time. While Chai’s art isn’t absurd, it does look gorgeous, and the theme fits us very well as we have an ever-growing collection of fresh tea and even have a little tea menu to present to guests when they want to try something special.

Which game do you still want to play before the end of the year?

I don’t think that I’ll have opportunity to play any new games this year, but I really want to play _any_ game 😛 I don’t have much time (and energy 😉 ) to play with my wife and my kids are too little for most of my collection (but my 7-year old daughter can sometimes suprise my – like when she beats me in Jaipur 🙂 ) so I rarely play any big, complicated games (which I really enjoy). One of games that I own, but I feel like I haven’t played it anywhere near enough is Nemesis. Recently I’ve took it with me for my business trip just to play it solo in hotel 😛
Also friend of mine bought Eclipse second edition. I’d like to test it out as Eclipse is my fauvorite game but I’m not sure if other people in my playgroup would like to play it as we’ve played Eclipse _a_lot_ 🙂

Well I put Tiny Epic Dinosaurs on my Christmas list, so hopefully that works out for me.

My ghost of gaming present just said “what’s a board game?”.

Two teams control their own submarine and the different stations it comes with. Communication is key to navigate the submarine and to figure out where the other team is located - so you can try to torpedo them to the bottom of the ocean or try to prevent they shoot at you. This game in unavailable right now. For more information, visit: BoardGameGeek.com

Dinosaurs have returned to the world and parks spring up around the globe! This worker-placement game revolves around making your own… Jurassi… eh, Dinosaur park! Spare no expense and try to make the best park of them all and drive your jeep around to experience the wonder and excitement. But don’t forget the importance of security, accidents are prone to happen when dealing with such creatures.

Tiny Towns is a game about building a cute village on a four by four grid. Buildings are constructed by laying out the resources in the right shapes and combinations of resources which sounds easy but creates a great puzzle game full of tough decisions.