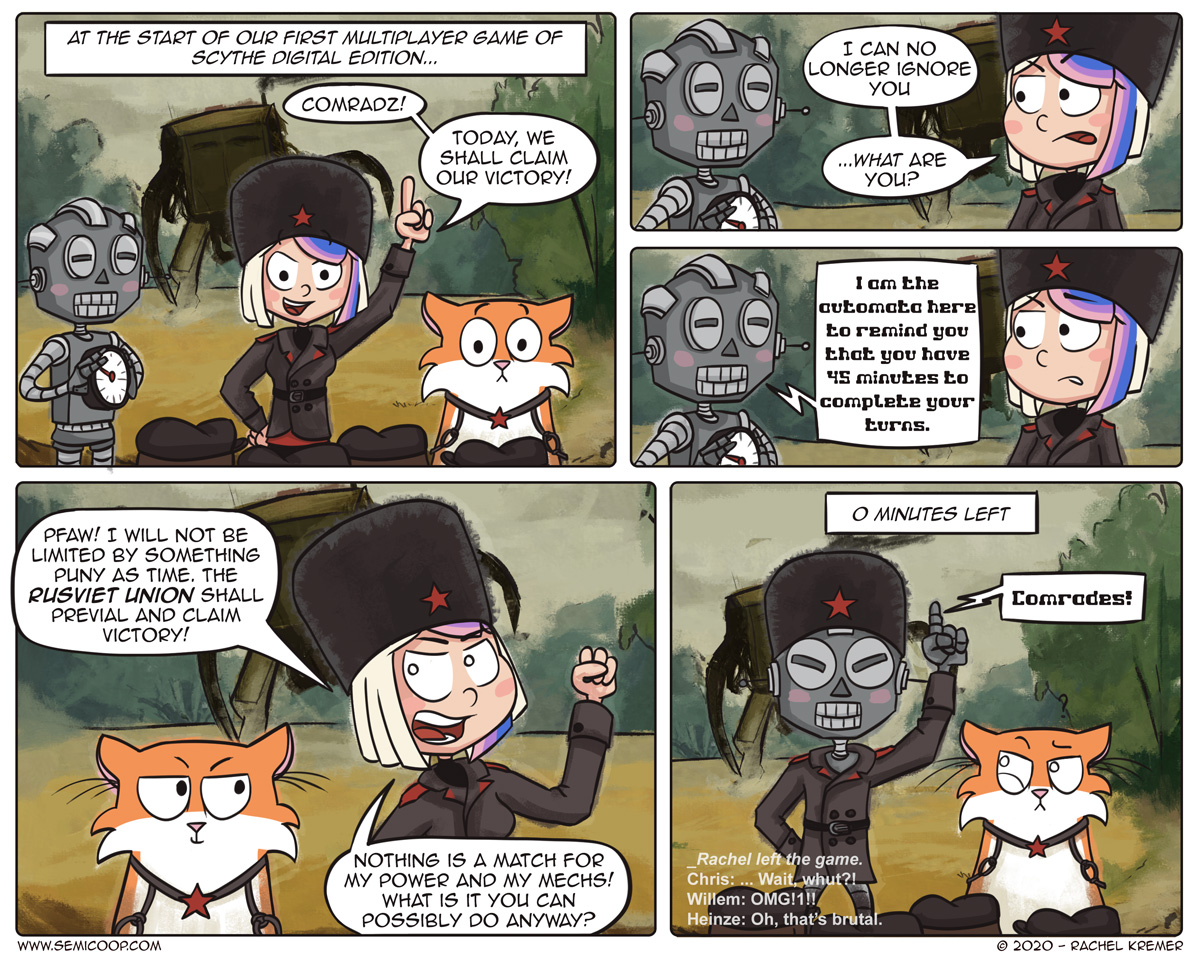 Last week we played a game of Scythe: Digital Edition and it was the first time we ran into the issue of running out of time on the turn timer. We underestimated the amount of time a little refresher on the rules would take, so the timer was already running while we were still figuring out things like recruits. It took Rachel some additional time to internalize all the rules which resulted in her being unceremoniously kicked out of the game and replaced by an AI player. The game ended a few turns later but it was a bit of a shock to all of us to see there wasn’t even an option to keep her in the game. The digital version works well although we did all miss the great player boards the analog version of the game comes with. We’ve planned a rematch this week so hopefully, the automa doesn’t have to rise up and kicks players out of the game again. The digital version of Scythe is part of the great Asmodee Digital Humble Bundle (which is still available for three days btw) which offers a lot of great games for a great price.

Speaking about great games and great prizes, over on Twitter we having a giveaway! Sophie and James make up Needy Cat games and they’re organizing a game jam to support Feline and Wildlife Rescue Nottingham. We thought this is a great idea and to support people getting creative and designing games, we decided to buy two tickets for their online game design course and give them away! They’ve done the design of some amazing games and the six lectures cover topics from designing, playtesting and rules writing so it’s a great resource if you want to learn more about designing games. To win you have to give us a one tweet design idea for a game based on Semi Co-op (our comic) and we’ll pick a winner this Friday! More info can be found on Twitter and while you’re there, why not give it a RT? 😉

In other news, Spiel is postponed until 2021, it is absolutely the right call to make and wasn’t really a surprise at this point but it also means it will be a gaming con free year for us which is a bit of a bummer. While we’ve been appearing in all manner of videos and podcasts to at least collaborate a bit with all of our convention friends, it’s sad that we won’t be able to see each other in real life until next year. We’re also very curious about what this will mean for releases of games etc. and more importantly, how will we even know what titles to be excited about?

What games releases should we be excited about this year?

Honestly you probably know what’s coming out better than I would.

We ran into the same issue, but if you select the Play and Go option, you get days to take your turns rather than minutes. Also if a player is kicked from the game due to network issues or their computer crashes then they can rejoin in play and go mode, which has saved us more than once.

An engine-building game that's all about war and honor in an alternate history in the 1920s where mechs are part of daily life. Players try to conquer territory, enlist new recruits, reap resources, gain villagers, build structures and activate monstrous Mechs. --- Support us through affiliate links or visit and support your local game store! Amazon.com