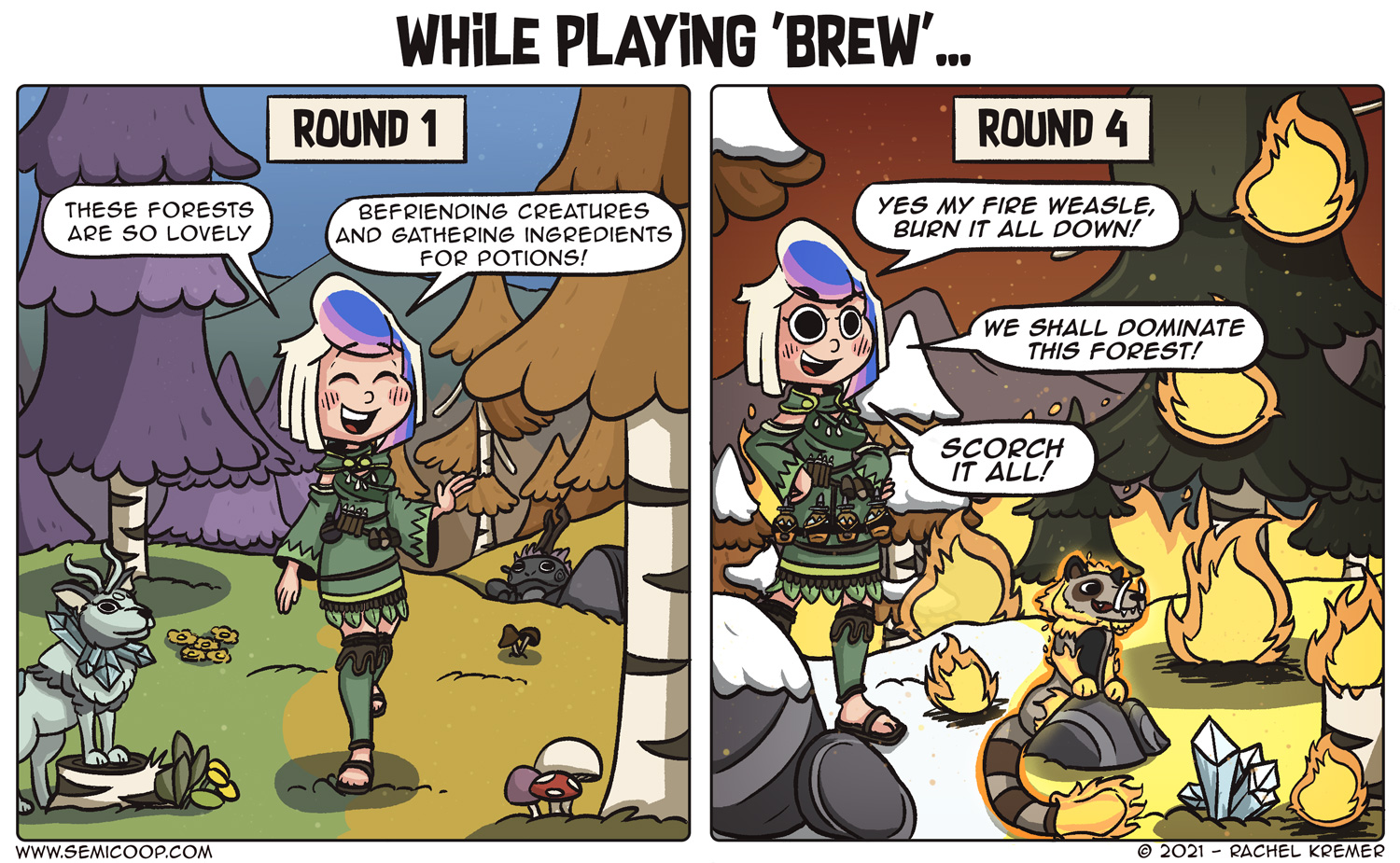 Brew was kindly provided by Pandasaurus Games for free. We thank them for giving us this game that led to this comic! For more information on how we deal with gifted games, please see our FAQ!

Brew, it’s in our top 10 most played games this year while it’s also meaner than what we regularly like in a game. It might present itself as a cute game about brewing potions and befriending animals but in reality, it’s an area control game where you are using forest critters to burn down forests while hopping up on potions to gain dominance in that same forest you just burned down. It has simple rules, beautiful components, a playtime of an hour, and a great price point. We highly recommend it and it’s a shame it was hit by delays because it might get snowed under all the new releases before it has claimed its time in the spotlight.

Speaking of the spotlight, there are a lot of great games coming out right now. Last week we played Kombo Klash!, Riverside, Burgle Bros 2, Whirling Witchcraft, and That Time You Killed Me which are all new releases worth a look. We’ve talked about some of these before, so let’s just focus on the new games.

Kombo Klash! is a tile-laying game about creating combos on the board while also playing defensive to prevent your opponent from gaining opportunities. Every tile almost has a cool power that is easy to understand but has a cool way to use them, it has a slight memory mechanic, it takes about twenty minutes, and is produced with attention to detail which we really appreciate.

Riverside is one of the few roll-and-writes we enjoy and even though the scoresheet has a bit of the “tax-form complexity” of a Ganz Schön Clever, we think the board element makes us enjoy it more than when it would have been just the scoresheet. The theme of a polar cruise is also a fun one and we will never not enjoy calculating a Median average. #mathNerds

That Time You Killed Me is another Pandasaurus release and this one is special. It’s an abstract game about two time travelers trying to kill each other. The game has three boards representing the past, present, and future and you have pawns that can not only move within a board but can also jump between boards. The game is presented as a narrative campaign but after playing one chapter we highly suspect that it’s actually mostly an abstract game with four variants. We did enjoy it a lot because it can take a while before you realize how to utilize your time travel powers but then your mind suddenly expands and you’ll see cool moves everywhere. We’ll probably explore the other chapters soon and we’ll try to give some spoiler-free impressions of the whole box.

This week we have no idea what we’ll play. Maybe we’ll start our Destinies campaign, maybe we’ll get back to Oltréé, there are loads of games we want to play again so we’ll have a good time no matter what.

Tokaido. So cute and relaxing. But also the most ruthlessly cutthroat game I have played in a long time.

Mythe. Don’t play dumb with me, I know you’ve got that sword in your hand! GIVE IT!

Bring back balance in the forest with potions and extraordinary woodland creatures! Gather ingredients, brew potions, place your dice, dominate forests, burn things down. There's a lot to discover in this game! For more information, check out the BGG page!