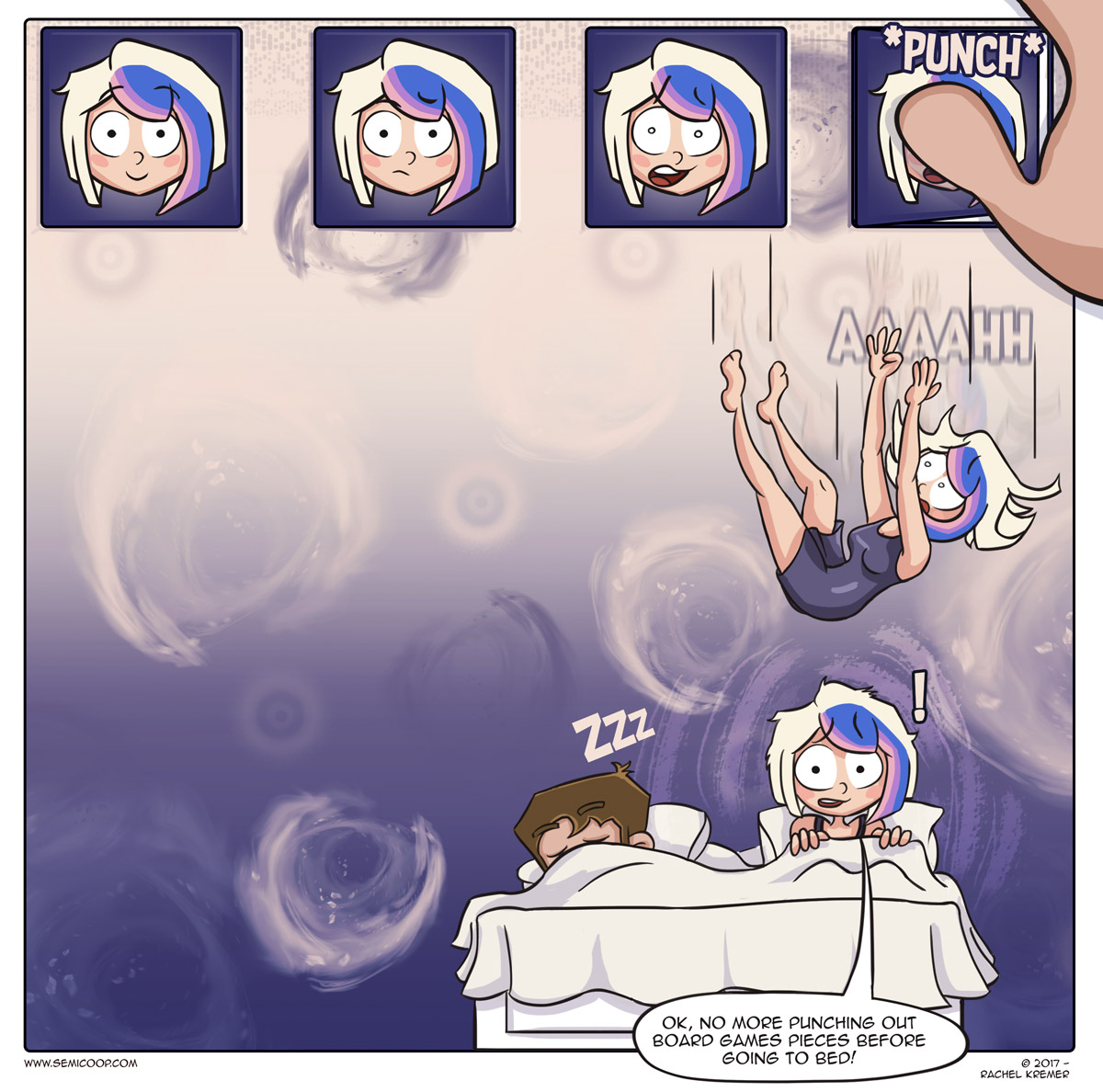 Punching out cardboard pieces of a new game… a fantastic activity. … Or is it? 😀

So it’s been an interesting week. I’ve been busy designing all sorts of things for Essen Spiel, making videos and thinking of awesome plans for Semi Co-op. After 2,5 years it’s time for a change, time for Semi Co-op to grow. Don’t worry, the comics won’t go away, we’re working on ideas to expand. So we’ve been playing with this idea of making videos, but we wanted ‘it’ to be Semi Co-op and not us sitting in front of a camera, so I’m working on animated versions of our cartoon characters!

Yesterday was an excellent opportunity to test run my unfinished puppets and to get a sneak preview of our future plans out in the open! We’re participating in a Star Realms tournament with other board game content creators and everybody loves to taunt each other through videos. We felt we needed to reply in a video as well and did so:

I don’t know yet when we will officially launch this new part of Semi Co-op – it might take a while, but the enthusiastic responses flatter and motivate me greatly. Thanks, everybody. 🙂

Have you ever dreamt of board games?

I visited Catan in a dream …

I began in the grassy plains space where the sheep come from. It was so nice, sunny and peaceful. I could look out and see the mountains on the horizon so I ventured out there to get a good look at things. When I was high enough up the mountainside, I could see the landscape stretch out towards the blue horizon. It was only then did I realize I was in Catan: there were actual giant, monolithic circular stones with the numbers on them, along with a few roads and settlements here and there.

I decided to venture toward the nearest one to see if there weren’t any inhabitants to meet. Maybe I would see actual Catanians! The settlement neighbored the mountain hex I had climbed, along with a brick and forest hex. The brick had a 6 and the forest a 2, I saw, and when I arrived, the settlement reflected it: the majority of the roads and buildings were composed of rich, red brick. The people had rich, red hair and they all had toothpicks perched on their rich, red lips – perhaps an offshoot of their light wood harvesting. They were all warm and happy, but never elaborated beyond a “hello,” or a “good day,” as they went about their business. Think the opening song sequence from Beauty and the Beast. “Bonjour!”

This made me curious to see how their neighboring forest was getting along. When I crossed into that hex I was soon met with further ramifications of its 2 value. Forest elves ambushed me, demanding I state my business in their woods. Apparently the infrequency of them contributing to Catan (ie rarely rolling a 2) had made them rather severe shut-ins. They cursed the brick people and their thieving and blaspheming, misusing their sacred woods as they did for the sake of their unnecessary toothpicks.

They did let me pass, though, and as I left the forest for the wheat fields on the far side, I realized they had gifted me a sheep. I was walking it on a leash. I don’t know. I suppose that’s how the game has worked for me in the past: I just end up with sheep that I wasn’t intent on getting. But this sheep proved useful. As we took our first steps into the lush, flowing wheat fields, it started feasting on the stalks. Who knew, sheep love wheat! This gave me an idea …

Next thing I know, I’ve loaded up my sheepy companion with an impossible amount of bushels of harvested wheat and have returned to the toothpick brick people and their bricky settlement. Finding it easy to avail myself of their cheery and enthusiastic industriousness, we make quick work of baking mountains of delicious, warm bread from their bounty of big, brick ovens. Then the brick people, my sheep, and I all make for the forest, armed with our neighborly gift.

Turns out, forest elves love freshly baked bread. To end the dream in classic campy comedy, one of the elves was having a hard time getting some unwieldy crust from between her teeth, to which one of the brick people slyly offered her a toothpick. There was a momentary stare down, with everyone’s attention simultaneously shifting towards them, a heart beat of silence, then everyone – forest elves and brick people, me and even my sheep together – all burst out laughing.

That’s awesome, thanks for sharing! 😀 This could be the script for the movie about Catan that Sony might be working on.

I once dreamed I was at a board game store and I picked up a copy of a game I was dying to play. I went up to the register to pay for it, knowing I had exactly enough money to buy it, but when I opened my wallet, all I found was about 100 bills of really junky paper money from all sorts of different games. Talk about frustration!

Oh man, those are the moments that you would like to be able to realize that it’s a dream and take control of your dream…. to buy ALL of the games in the store! 😀

catan the movie… catan the sequil. catan the musical. the revenge of catan.
i wonder who dreamed up catan te movie…