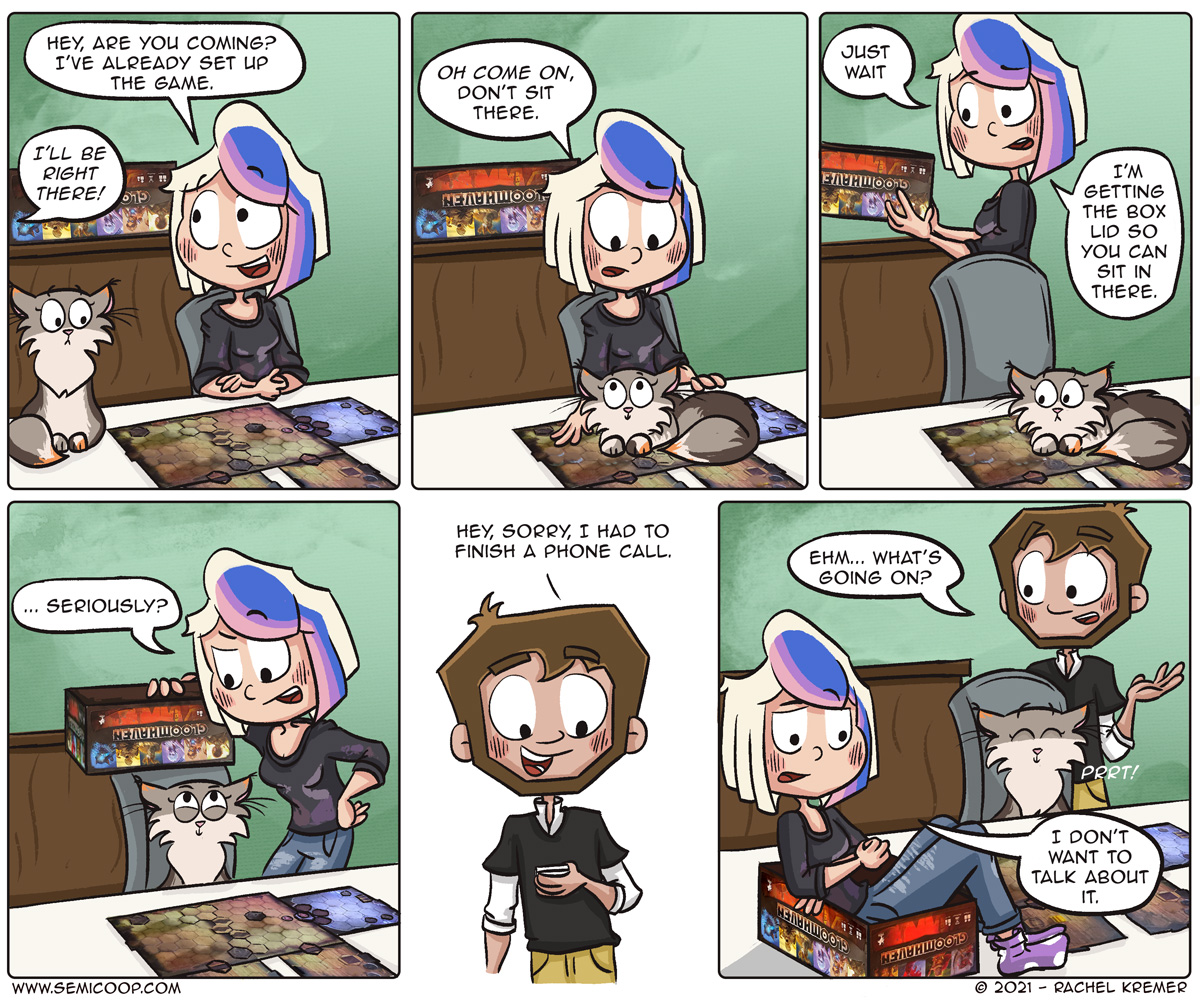 Last week we’ve updated our Patreon page. We’ve changed some of the rewards and we’ll start making our Sketchie comics again for our patrons! For only $1 a month, you get access to brand new extra comics and you get to support our work so we can keep making comics every week! We would really appreciate it if you’d consider becoming a patron, thanks! <3

I mean, cats… Especially Starbuck in our case has the tendency to want to be the center of attention and she often finds it hard to share the attention with a board game. But how can you say no to that face? 😉

Last week flew by, honestly, I can hardly remember what we’ve played. Luckily, we’ve got an app for that! We played a scenario of Gloomhaven, making it our 41st play…! Honestly, does anybody know somebody who actually finished the game? We’re determined to finish it, but we’re also wondering how many years it will take us. I think there will even be a successor to Frosthaven by the time we finish Gloomhaven. But, we’re still having fun with it and that’s impressive.

We also played a relaxing two-player game of PARKS. Ever since we’ve played it with four players, we now realize how non-aggressive the game is with just two players. I still can’t believe how amazingly pretty everything in the game is.
Our adventure in the stone age also continued and we finally beat the fourth scenario (it took us four tries in total)! The day after we played the fifth scenario, which turned out to be suspiciously easy after the previous one. We really enjoy Paleo and frankly think it’s one of the better co-op games out there and we can’t wait to introduce it to other people once we get to organize game nights again. We play the game with just two players, which we think works fine, but everybody is stoked about playing it with 3-4 players.

What else did we play…? Oh yes! The King is Dead. We had played this with three players and really loved the experience. This weekend, we wanted to give it a try with just two players. The game doesn’t disappoint, but in our two games, the tie-breaker decided both times who won. The last player seemed to have an advantage in setting the final board state, so we focused too much on passing, just to be the last in the game. We’ll give it a try with the advanced card deck and see how that works for us. Otherwise, we’ll just save it for when we can play it with three or four players!

We ended the weekend with Onitama, which is one of those almost iconic games that definitely replace chess for us. It’s quick, it’s different every time and it looks impressive.

What’s your favorite box to sit in? 😉

I do not enjoy sitting in boxes. Our cats, however, mean we have to keep our boardgames closed when they aren’t in immediate use, because of the traditional Cat Equation of “If I fits, I sits.”

I do know people who’ve finished Gloomhaven (Some have even done second games with other groups – can’t recall if they’d mentioned finishing those though).

As for my group, we’ve been in Covid-Standby on Gloomhaven since March. I can’t wait to play again, though that’s many months away.

We previously thought we’d probably finish GH + Forgotten Circles right as Frosthaven delivered but that seems like a ludicrous thought now :for sure!