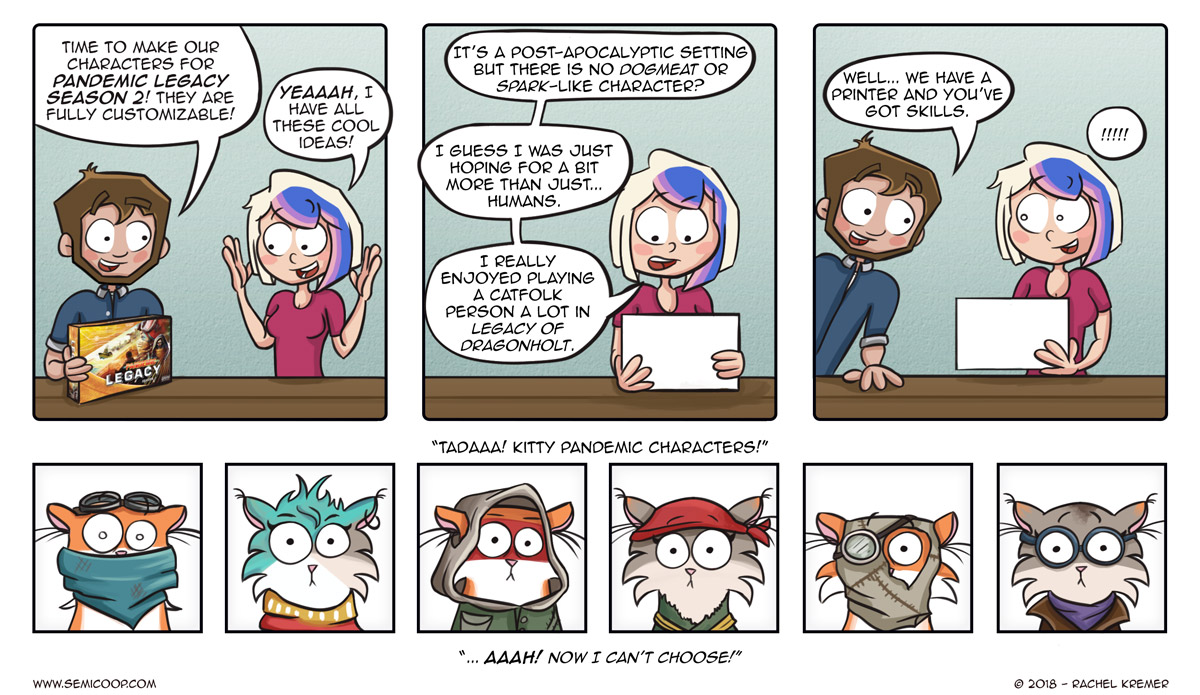 With the Golden Standees behind us, it’s time for ‘normal’ comics again!

We’ve started Pandemic Legacy Season 2 and won the January game – a good start of the game! … And then we played February, which started out amazing for us but soon turned into an avalanche of horrific outbreaks. We obviously didn’t win, but we’ll have our revenge soon. We’re really loving the game so far, it’s different from Season 1 in a very interesting and challenging game. We’re really curious what’s going to happen further on in the game. 🙂

We’re trying to finish some campaign games we have laying around which we’re just playing with the two of us. Finishing Legacy of Dragonholt felt good and we’ve paused our Arkham Horror LCG campaign in absence of the last scenario pack and so we decided it’s time to finish Mechs vs. Minions. We’re now down to the final mission! Which is looking like it will take us a few tries before we can beat it. After we’ve finished Mechs vs Minions it’s time for us the finally start playing the Tail Feathers campaign. And we still need to figure out with who we want to play Charterstone or if we want to play it with just the two of us, but we’re not sure if we’ll get a full game experience with just two players.

Summing it up: we’ve been playing Mechs vs Minions, Pandemic Legacy Season 2, Kingdomino, Mysterium and Battlecon! Quite a varied menu of board games if I say so myself!

What game would certainly improve with the addition of some animal characters? 😉

I may have to buy a new version to play with the cats now….

Is the white box in Rachel’s hands symbolic for how see sees new games as blank shells compared to games of old? Or does see so many new games that they all blur together, so there is no reason to distinct them? Or does she sees game boxes as blank canvases? Or new legacy games as a starting point? Or did she forget to enable a layer in Photoshop?

So many thoughts, so few panels, so many kitties.

The back of the sticker sheets in Pandemic are white, but looking at it as a canvas full of possibilities (to make internet memes) is also allowed!

Umm… Is there a high-res version of the kitty pandemic characters available? Asking for, well, my daughters as we’re about to begin Season 2.

D’aww, all those cats! I wonder whether they would really stay put to be drawn.
Also, this asks for in-game kitty interference photos. ‘Oh hello, is this me?’ *stumble, push, stumble*

Reminds me of the game of Dead of Winter when I wound up with what wound up being called the “tactical doggo”: https://i.imgur.com/oLXmP6k.jpg

Who’s an overpowered good boy? That’s right, you are!

Thanks for your enthusiasm! 😀

Pandemic Legacy returns with a 2nd season! Find out what happened with the world after the dreadful events in season 1. Will you be able to restore balance to the world left behind by what happened seventy years ago? Support us through affiliate links or visit and support your local game store! Amazon.com 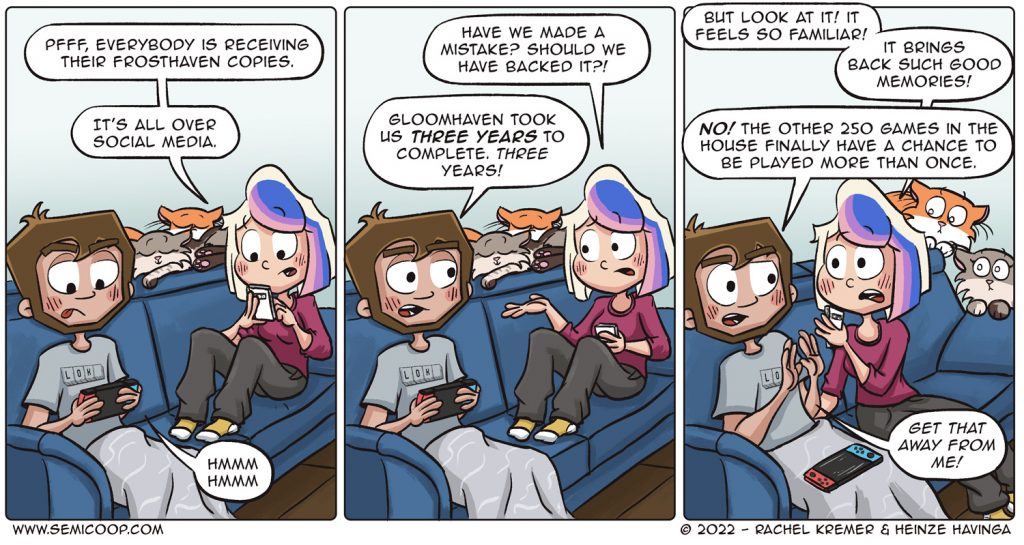