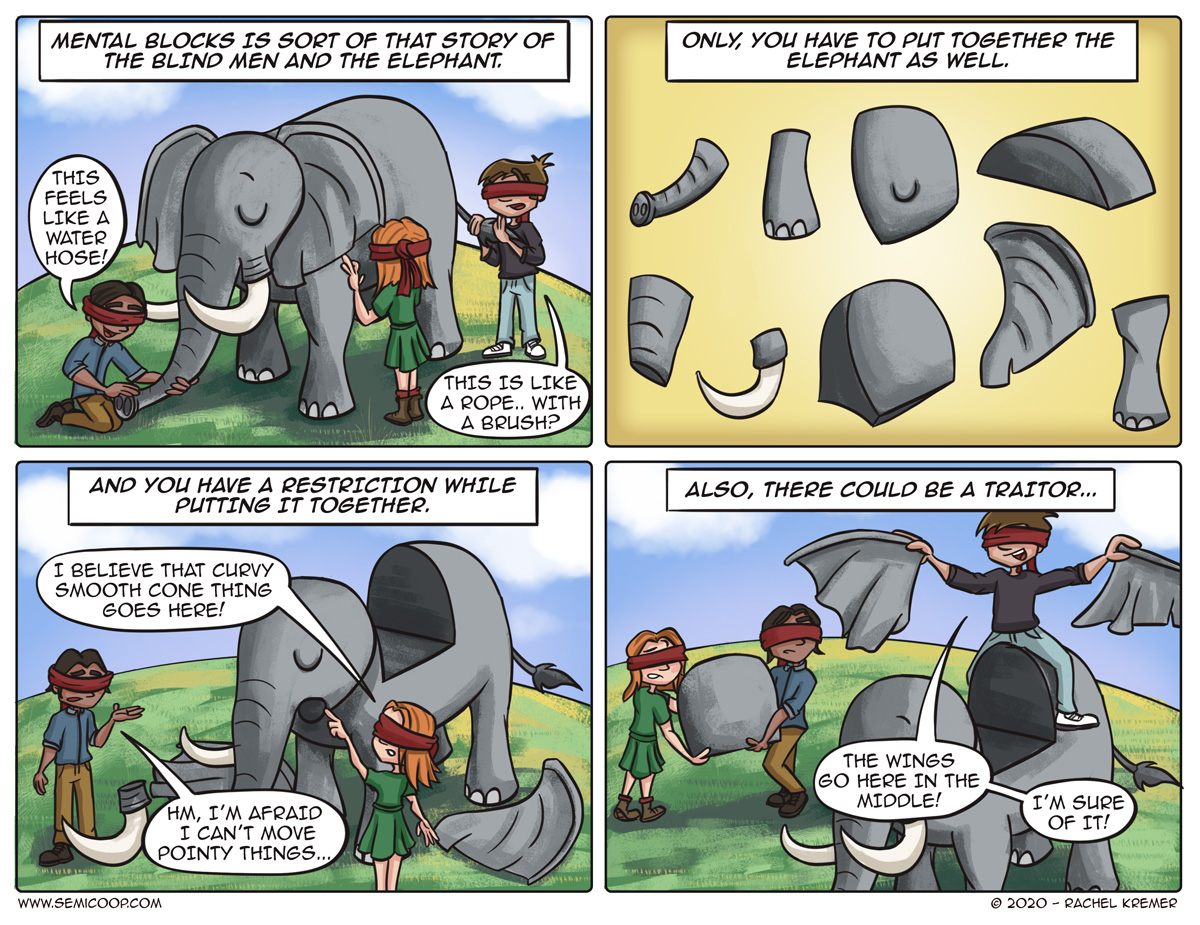 Mental Blocks was kindly provided by Pandasaurus for free. We thank them for giving us this game which led to this comic! For more information on how we deal with gifted games, please see our FAQ!

We’ve played eleven games (puzzles? rounds?) of Mental Blocks this weekend so we couldn’t resist doing a comic about it this week. We haven’t seen a lot of people talking about this game but it has been the only game where every time people want to play at least three rounds and are impressed by how much fun the puzzles are. Our only complaint is that nobody is interested in the traitor variant so we haven’t been able to try that… 😈

This comic came about when we tried to explain what the game was like to somebody and somehow the story of the “Blind men and an Elephant” crossed our minds. The story is meant to teach how you might not see the whole picture of a certain situation and only by working together you can make sense of complex situations. This explanation quickly turns into something hilarious once you start to explain the optional parts of the restrictions, glitch cards, and the traitor variant, however…

It’s been a very busy week gaming wise! On Monday I played a game of Godtear with a friend and realized that I might want to paint all the Godtear miniatures which will take a lot of time but it looks so good on the table!

We also played D&D on Monday and even though it was a short session we had a blast and really enjoyed the boss battle against the Rat Catcher 3000, for which we had printed the Miner King mini created by DutchMogul on Thingiverse. He has a lot of great free minis you can download and print. Ours came out beautiful so we highly recommend his work if you need some cool things to print on your 3d printer.

On Thursday, we played our regular game of King’s Dilemma, which is still really fun and Shut Up and Sit down did a lovely review about it if you want to know more. Saturday and Sunday we had two game days, we played Mental Blocks during both and also played Mysterium, Love Letter and Gorilla Marketing. The last one is a fun party game about coming up with brand names and slogans for things like food trucks, movies or even college courses. The game does require the players to be creative under pressure, so it might not be for everybody, but we enjoyed our first game a lot!

This week we’re going to be slowing down a bit but we have a day of Gaslands planned on Saturday, so expect some modded Hot Wheels cars and explosions on our Instagram feed next week!

What games do you always end up playing multiple rounds of?

Dang, now I want a board game about assembling animals where only certain players can handle specific body parts.

Escape, the curse of the hidden temple or splendor, both are really fun to play with a bunch of people and are hard to stop playing!