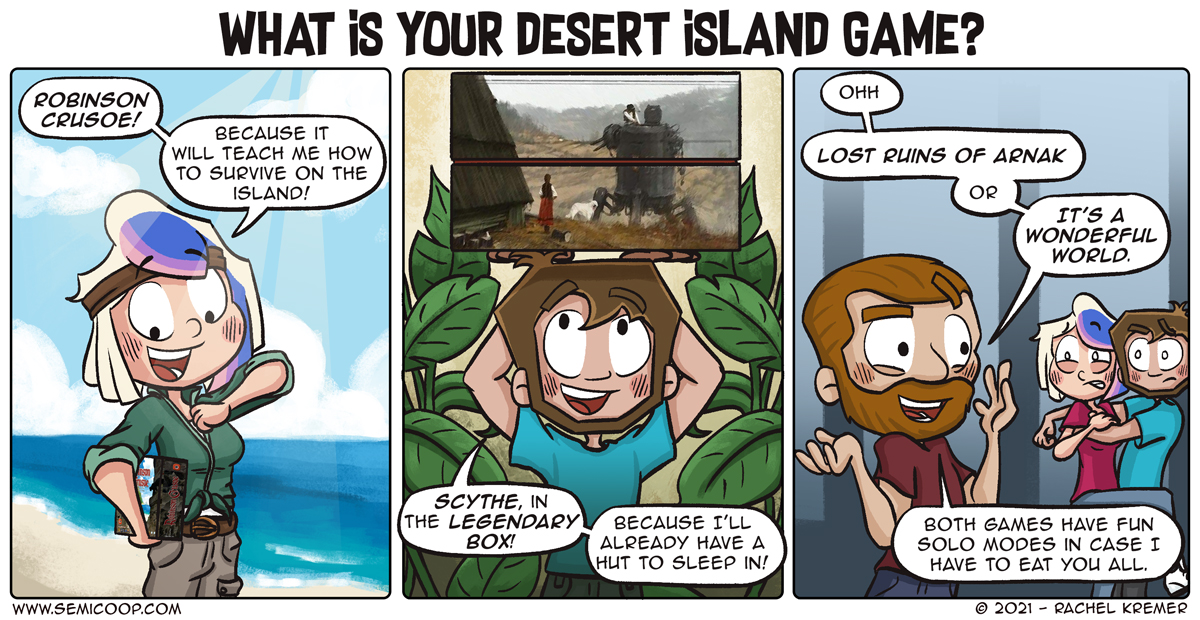 Ahh, the eternal question… what game(s) would you take to a desert island? My personal opinion diverts from that of my comic’s character. I think most people would go for a gigantic game like Gloomhaven because the more content the better? Somehow I also see the charm in taking a compact game that can be played on basically any surface, unaffected by weather elements like the game Hive. Then again, the option of having a solo-option might also be handy…! Preferably, I’d just skip the desert island. 😉

Last week we reached a new milestone on Instagram, 14k followers! That is a lot of people if you think about it, even more people than that live in the city I grew up in. Crazy! But honestly, even though we are sometimes frustrated by the platform’s algorithms, we’re enjoying sharing our board gaming adventures there and love the lively community.

We also got a surprise in the mail that we’re really hyped about: we got the expansion and campaign for It’s a Wonderful World, a game we both really love. The campaign (War or Peace) will have to wait a little longer since we don’t want to play that with just the two of us but we can’t wait to play more games with the Corruption & Ascension expansion. The expansion dials the game up to eleven with more extreme and advanced cards, making the engine building even more fun.

Game-wise it has been a varied week! Obviously, we’ve played It’s a Wonderful World, but also a second session of Escape Tales: Children of Wyrmwoods. We’re not completely sure what we think about the game. Sometimes it’s really creative and original, but other times it can feel slightly sloppy. We came across one puzzle that we had the correct answer to, but it wasn’t according to the app. Luckily, you don’t get any penalties for when this happens, but it did throw us off a little. However, we do have the feeling that the story is about to get interesting, so we definitely are going to finish the game since there is still a lot of content that might surprise us.

We also played Megacity Oceania, The King is Dead, Umbra Via, Netrunner, and a game of Cubitos last night! We can only conclude: geez, there are a lot of good games out in the world.

What would be your desert island game?

How about something ironic like “Forbidden Island” or “Hellapagos”?

We haven’t played Hellapagos, how is it? 😀

Something with a lot of replayability. Like a nice complete set of Dominion with all of the expansions.

Except for the Saboteur card.

Seriously. That card is evil. I am glad they removed it in the second edition of Intrigue because it did not fit the design and any game including it quickly became a race to the bottom.

Finally, enough time to actually play through Gloomhaven! But even then, I fear rescue might come faster than it takes to finish it.

Cooperative, until the food and water run low. Then it’s every man for themselves. 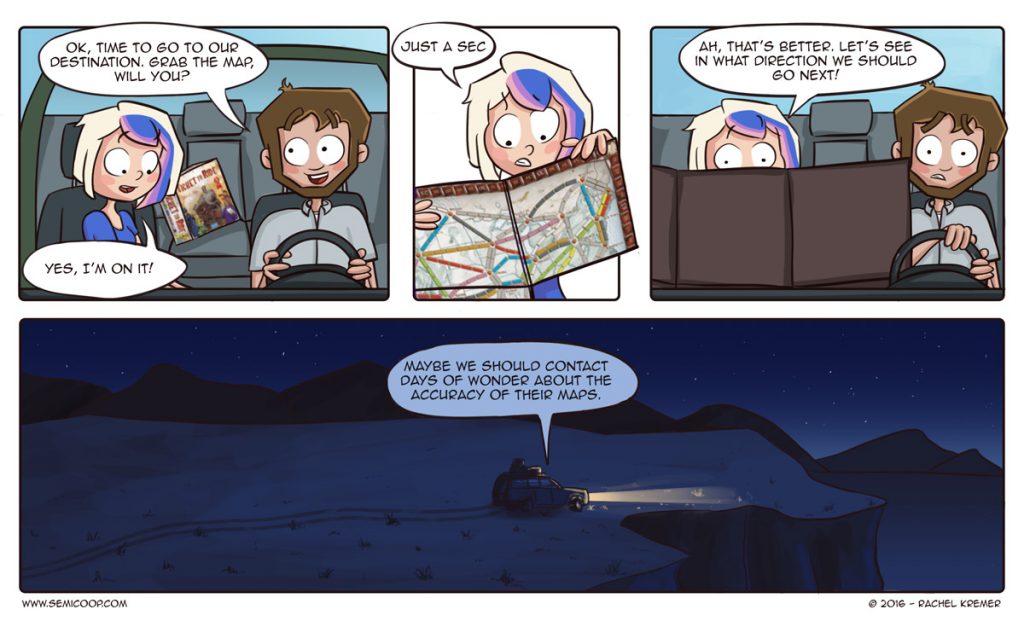