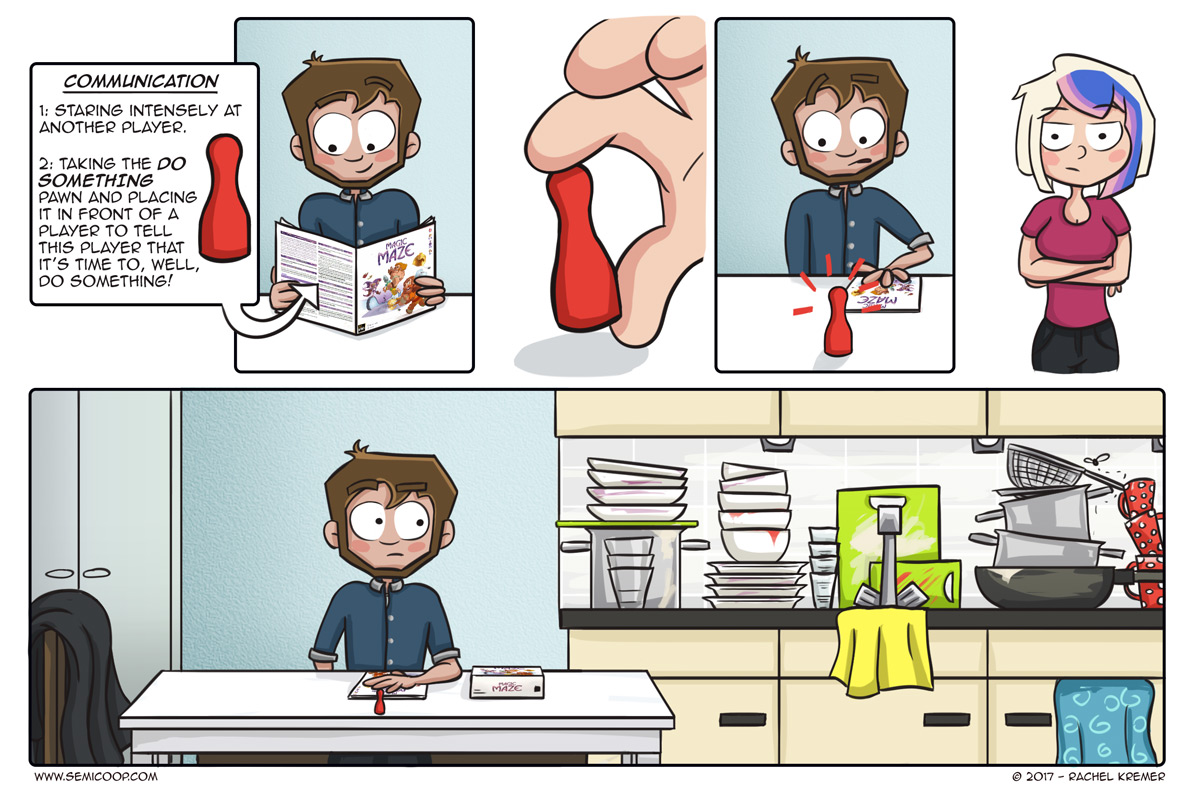 During a game of Magic Maze, players are not allowed to talk to each other during the most important parts of the game and that can be quite tricky in a real-time cooperative game. There is however… a DO SOMETHING pawn! Players can put it in front of another player to catch their attention and notify them that they are probably missing something important and should … do something! What makes this such a tricky game? Well, there are four hero pawns on the board and every player has a certain action they can make all the hero pawns do. For example: one player can move any of the character pawns to the north, another player can move them to the east, etc etc. Just thinking about that already made my head hurt. I imagine it is a little more relaxed than Escape: The Curse of the Temple though, in which players can constantly scream at each other, need to roll dice (the noise!), while neurotic music is playing on the background.

We haven’t played the game yet and we’re not sure if it is a game we would enjoy. Nonetheless, this gameplay mechanic of a DO SOMETHING pawn made for an excellent comic idea. 😉

Our item in the Jack Vasel Memorial Fund Action is a blast! The highest bid is $200 so far and THAT IS AMAZING! We’re so thankful for the generosity of people and we’re grateful we get to help people who need it in this way. If you’re interested, this is the link to the auction item: https://www.boardgamegeek.com/geeklist/230490/item/5749356#item5749356 The auction ends tomorrow.

PS. I’ve been swamped with work since Essen, so I haven’t had a chance to work on our animated Semi Co-op project. Hopefully, I can block time in my schedule to get some serious Semi Co-op work done in December. 🙂

What’s your opinion of hastily real-time cooperative games like Magic Maze and Escape?

I think real-time cooperative games are an essential part of a well-rounded collection.

Real-time cooperative games demonstrate a refreshing relief from both of these tendencies: we’re working for a common goal while relying on one another and NOT able to control the other’s actions. Therefore, any cooperative success is a result of everyone acting independently in a role that only they can do and have ultimate control. The bossy pants can’t simultaneously do their part while lording over the roles of others. Which – being as often guilty of being the bossy pants as I am annoyed by it – is a fantastic relief.

Another game that I’ve been longing to explore for this sake is Space Cadets – a real-time cooperative game where everyone has a different Star Trek-esque role in order to succeed on missions.

All in all, real-time coops are fast and furious fun, freshening up a table of any format. Try it. Throw a couple of games of Escape in the middle of a game day. It feels like some exercise in the middle of a study day or long day at the office: you come back to the “usual grind” reinvigorated and inspired.

I LOVE real-time games, especially cooperative ones. Unfortunately, it’s really hard to find other people who at least like them and don’t run away screaming whenever I want to play Escape or Space Alert (one of my all-time-favourite games) …
But hey, Magic Maze is okay for many of my friends. Perhaps soundtracks make them nervous and Magic Maze has none 😀

Do something pawn is not that useful actually. Especially when two persons start to bash it in front each other 😀 But it was a hilarious thing when we have naturally started to use regular moves to draw attention. Like moving one of the regular pawns back and forth on the escalator to “tell” everyone that it should be moved next or constantly moving one pawn to a wall, etc.

Strange, for me, Magic Maze felt more stressful than Escape. The lack of communication is very frustrating. In Escape, you can talk at least, so you can work together better.
The soundtrack is not a dealbreaker. I’d be fine with a Magic Maze soundtrack too, it happened a few times that I wasn’t aware of the almost empty hourglass. However, the hourglass-turning is hard to implement with a soundtrack, it would need an app and procedural sound generation.

I think soundtracks are indispensable and use them whenever possible, from RPGs to boardgames.

There’s something magical about the power of association. You hear the fanfare of Fox or Marvel or Universal and it’s like a spell is cast: you’re now ready for a movie. Everything else in this world is background.

I press play on the Escape soundtrack and my friends drop their conversation in the next room or come barreling out of the bathroom, relieved that they made it to the table, standing, and ready with dice in hand, before the booming voice sounds … “ESCAPE!”

The apps for One Night Ultimate Werewolf and Sheriff of Nottingham are also staples at my table. Even though the Sheriff app is little more than a timer with ambient marketplace noises, it helps to keep people focused and immersed in their wheelings and dealings.

A group of adventurers have been stripped of their possessions and have decided to rob the local mall to steal the equipment you need to continue your adventures. In this real-time co-op game, each player controls a certain action that applies to all of the hero pawns - like walking north, south, east or taking an escalator. This means every player needs to keep a close eye on when a certain action is needed.... But to make things a little more difficult: communication between players is restricted. Support us through affiliate links or visit and support your local game store! Amazon.com 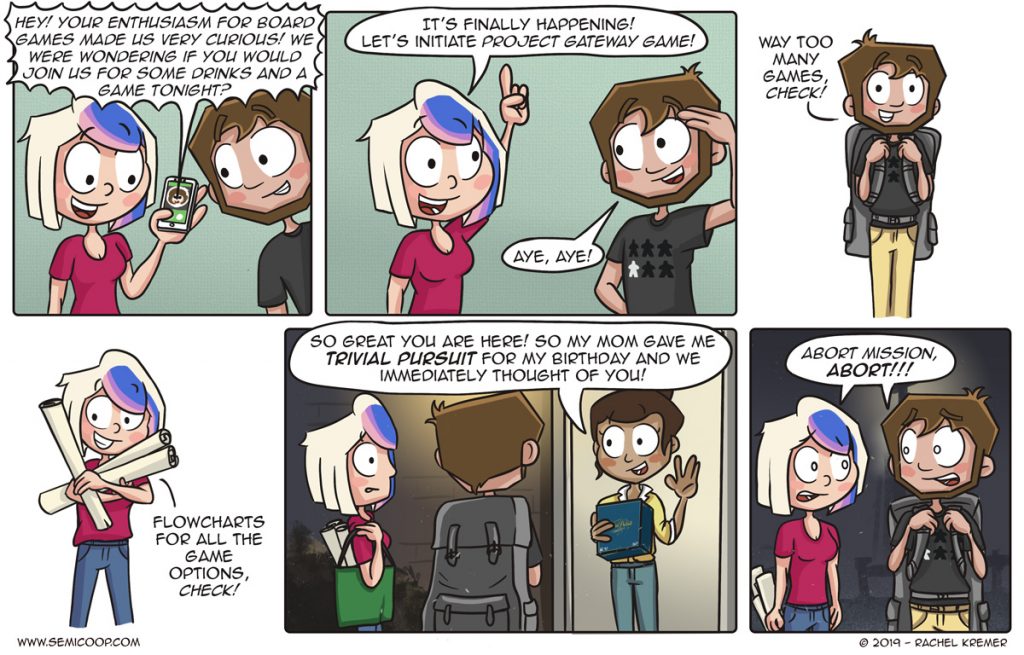