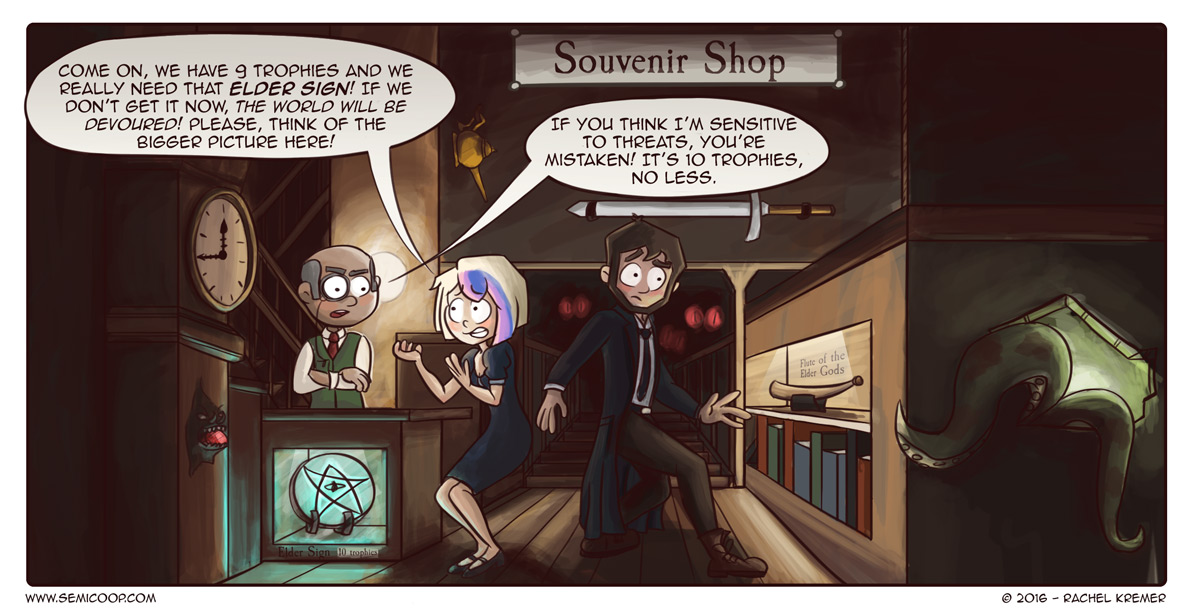 Elder Sign is a fun dice game which is set in the same world as Eldritch Horror, only it all takes place in a museum. You have to collect a certain number of Elder Signs to defeat the stirring Elder God before time runs out. As an investigator you can spend earned trophies on souvenirs and one of the options is to BUY one these much wanted Elder Signs. Since the Eldritch themed games are heavily supported by story elements, this always makes us chuckle and imagine a situation like in the comic above. This player action was later ‘removed’ from the game in the Gates of Arkham expansion. 🙂

But it does bring me to the fun fact of gameplay elements in games that aren’t particularly logical if you think about them just a second longer. Like the fact that super smart world saving scientists cannot ‘share knowledge’ with each other in Pandemic. What happened to phones and e-mail? 😉 Or that newborn kids in Agricola can work after one turn? Logical gameplay mechanics, of course, but slightly funny if you imagine it in the real world.

Can you name any gameplay mechanics that would be ‘weird’ in real life?

I always found it amusing you could save the world by shopping in the giftshop. With the unseen forces expansion for elder sign they did remove the ability to buy elder signs with trophies though so it really changes things up and you can spend them on other stuff instead of always stockpiling them for elder signs.

Mystery Express :
“-You only know the identity of the killer. But even if I’ve no idea of the killer, I know the hour, the modus and the place of the murder. So I’m the best detective in the world.”
Sounds legit too

Eclipse:
“Fire all canons. Don’t think about aiming – we will decide later which enemy ships we should hit”
“Enemy is aproaching. Remove all hulls from our ships and install additional computers and canons. Becouse we obviously have them on board” 😉
“Lets modify our cruizers. All of them – even ones that are about to fight with enemy on the other side of galaxy. Of course using technology that we just discovered”

Magic the Gathering:
“This elephant is not good enough. Give some boots to it. And maybe cloak. It would be even better with three swords. And two axes, one bow and some mage staff. Now cast the spell so it can fly. Perfect” 🙂

Food Chain Magnate: You may only advertise a type of product (Burgers!) not the name of your store, customers will get a hankering for the item and find the one that’s lowest price + closest. Billboards only work if directly adjacent to a house, and only affect that house. If a customer wants multiple items, and you can only provide some, they’ll stay home. You do not pay workers unless you train them. Once trained, everyone from Burger Chef to Executive Vice President to Zepplin Pilot make the same pay. All employees are salaried, you pay them whether or not they work. The first person to advertise never pays for marketing again and their ads run for eternity. The first person to waste food gets a fridge that no one else gets.

I, for one, would not wish to walk down a road paved in sheep.

FP:FR: The dog can drag an injured victim, but not lead a healed one. “Help! My house is on fire, and a dog tries to eat me!”

Switching roles around in ONUW. How good at identity theft is the robber if he can even steal the curse of lycanthropy?

You and other brave investigators gather in the museum to stop the Ancient One from resurrecting and destroying the world! This cooperative dice rolling game will indulge you in the world of Cthulhu, but mind the clock .. it is ticking. Every time it strikes midnight, something terrible might happen! Support us through (affiliate) links or visit your local game store! Amazon.com Comicasa (Dutch) 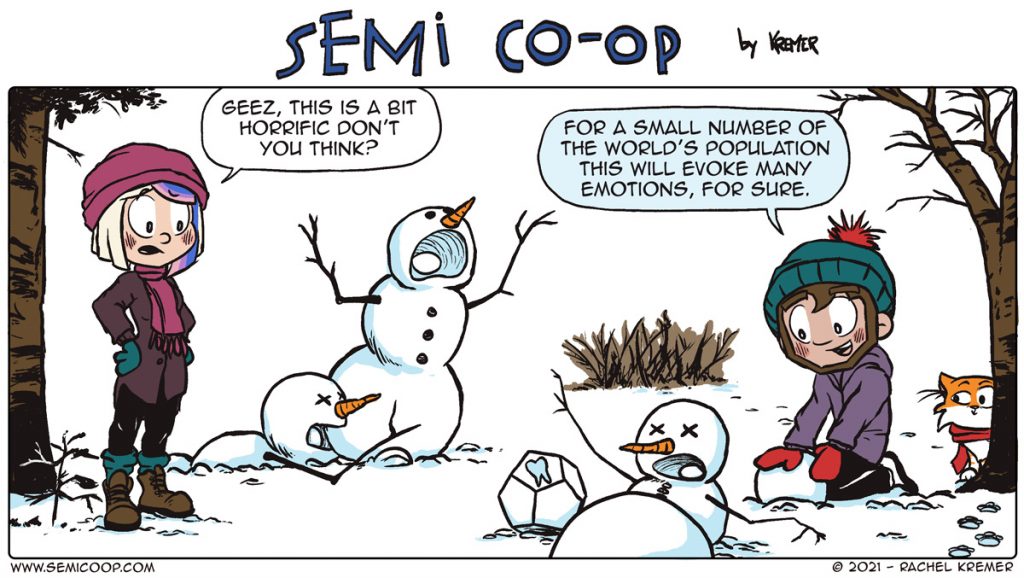