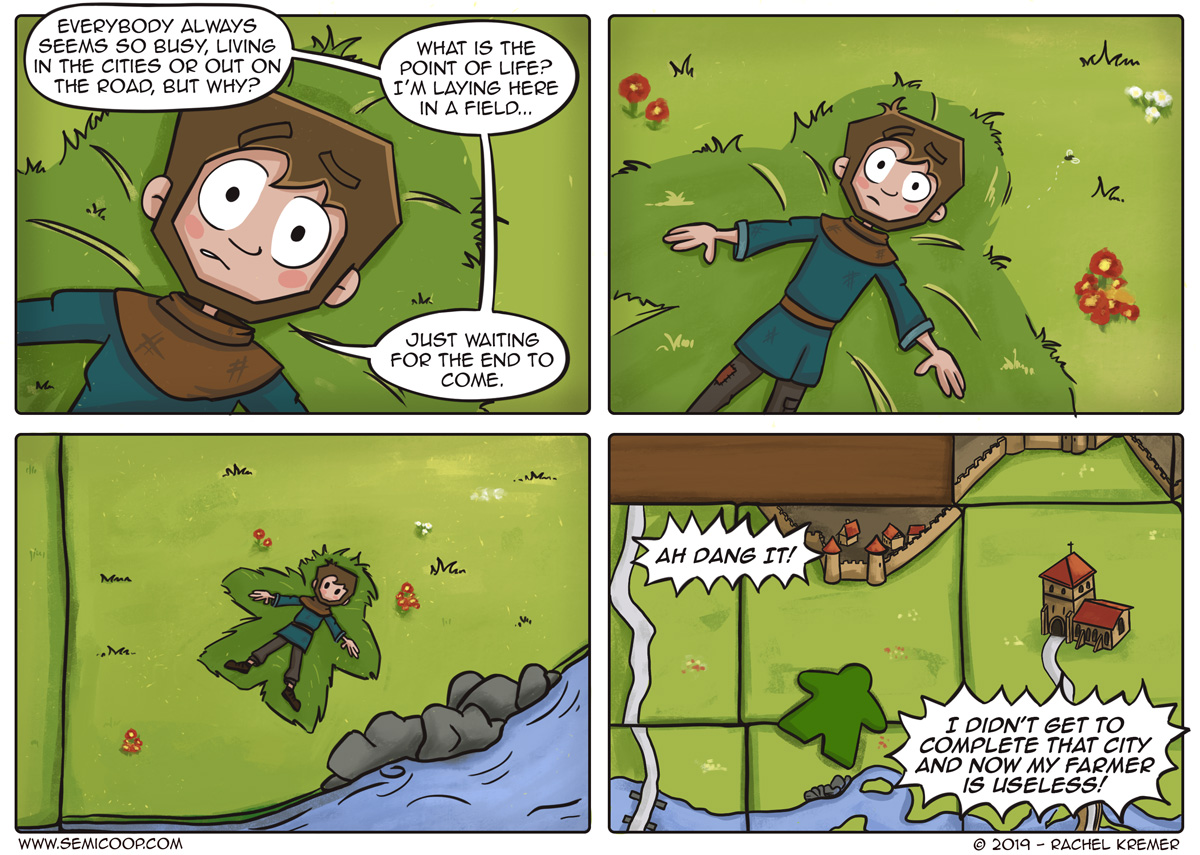 Yes. It took us more than four years, but we’ve finally made a comic about Carcassonne!
I’ll be very honest with you, I think I’ve only played Carcassonne once or (maybe) twice in my life and I remember the farmer-rules being quite tricky. It’s probably not even that complicated, but that’s what I remember of it. Nonetheless, that was enough inspiration for this comic 😉

So, Tuesday we received our copy of Architects of the West Kingdom and the Dungeons & Dragons Essentials Kit. The first thing I didn’t expect, was the small box of Architects of the West Kingdom! But everything fits in perfectly, so compliments to Renegade Games. We also played it and it’s so quick! Even though it was our first play. I expected it to be a more heavy game, but it’s actually a fun combination of game mechanics we’re both very familiar with so it was really easy to get started. It also turned out to be a close call since we ended up with a score of 31 and 30 (no clue if those are “OK” scores in the game, but it’s fun if it’s a close call ;-)).  I think we could easily finish a two-player game in 30 – 45 minutes, so that’s a big plus for us since we’re more likely to also play it in the evening. We’re really curious how it plays with 4 – 5 players and what that does with the playing time, how chaotic it gets on the board and if you’ll capture other player’s workers more often.

We also gave the D&D Essentials Kit a try and that meant I had to DM for the first time. Deeeaar goodness, I’ve mostly learned that being a DM is very hard work. Since we tried a two-player D&D session, we got to try out the sidekick system. It was interesting, but it’s also kinda tricky to involve that NPC in the game. It’s a character, but I found it hard to also roleplay that character while my head was trying to figure out what to do. 😉 I’m sure that I’ll look back at this first session with a big grin after playing some more games.

Is Carcassonne A game you still play or is it a game from the past?

Carcassonne is still a brilliant game, but unfortunately I dont get to play it very often, for 2 reasons. 1. One of my friends can’t wrap his head around the farming rules and refuses to do it, which means he cant compete and then doesn’t want to play. 2. Most of the rest of my gaming crew played this game a lot when they first all started gaming and now they’re not as interested in it. Sigh.

I’ve got the Big Box and ran it on table top day this year to get some play in.

It is still a popular option at the FLGS I go to, and I will play the virtual version every now and then to unwind. It is still present

My family loves Carcassonne, it is one that my parents request constantly. As such, I ended up buying the newest big box and ALL of the available expansion material with the new art, including promo stuff from the German store. As for the farmers, I always used one or two near the end of the game, but after playing with my dad, who is an extremely heavy farmer player, I’ve learned quite a bit more about their use.

In this classic game, you will develop the landscape around a medieval fortress city in medieval southern France. Players will build the game board by laying tiles and use their meeples to score points. A game that has been the origin of many board game enthusiasts! | Support us by using our affiliate link or visit and support your local game store! Amazon.com