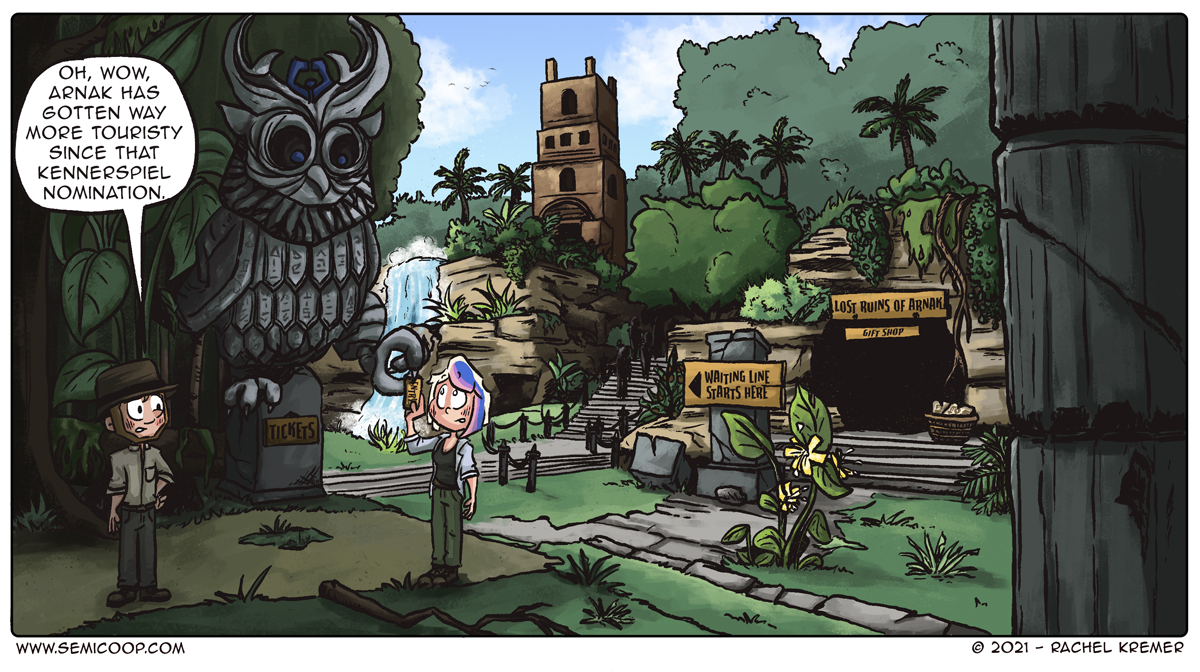 Lost Ruins of Arnak was kindly provided by CGE for free. We thank them for giving us this game that led to this comic! For more information on how we deal with gifted games, please see our FAQ.

Lost Ruins of Arnak was probably our favorite Spiel release of last year. We know we’re not the only ones loving Lost Ruins of Arnak because every time we see somebody talking about it online, loads of people react to it how they really like it as well. This got us wondering how “lost” can these ruins be considered if everybody loves the game so much? This resulted in visions of the Lost Ruins of Arnak slowly turning into a tourist attraction filled with gift shops and people waiting in line to see the ancient temple.

Lost Ruins of Arnak also has received a Kennierspiel nomination and along with Paleo, we think both games deserve the win for different reasons. Paleo has a bit more innovative things going on but Lost Ruins of Arnak just flows so well on every level. Fantasy Realms might be good as well btw. but we only played it once a few years ago, so we don’t really have an opinion about it.

So let’s talk about games we do have an opinion on, Pandemic Legacy Season 0! We only played the prologue game as it took us a bit longer than expected to get through the rules. They weren’t that complicated we were just easily distracted by trying to catch up with our friends. We got pretty excited about the possibilities of the design as it still feels like Pandemic but the changes to make it a Cold War spy thriller seem to make anything possible during the campaign. The fake passports are also super fun and it might be our favorite game component ever made. We’ll see how things progress once we get to actually see the campaign play out.

I also played my first game of Warmaster. This epic-scale miniature game in the Warhammer Fantasy universe is something I wanted to try for years and while the combat rules are a bit unclear, me and my opponent had a great time pushing tiny miniatures across the table and seeing knights crash into seas of undead units. So it’s time to reread the free Warmaster Revolution rulebook and plan another game!

What fictional board game location would you like to visit?