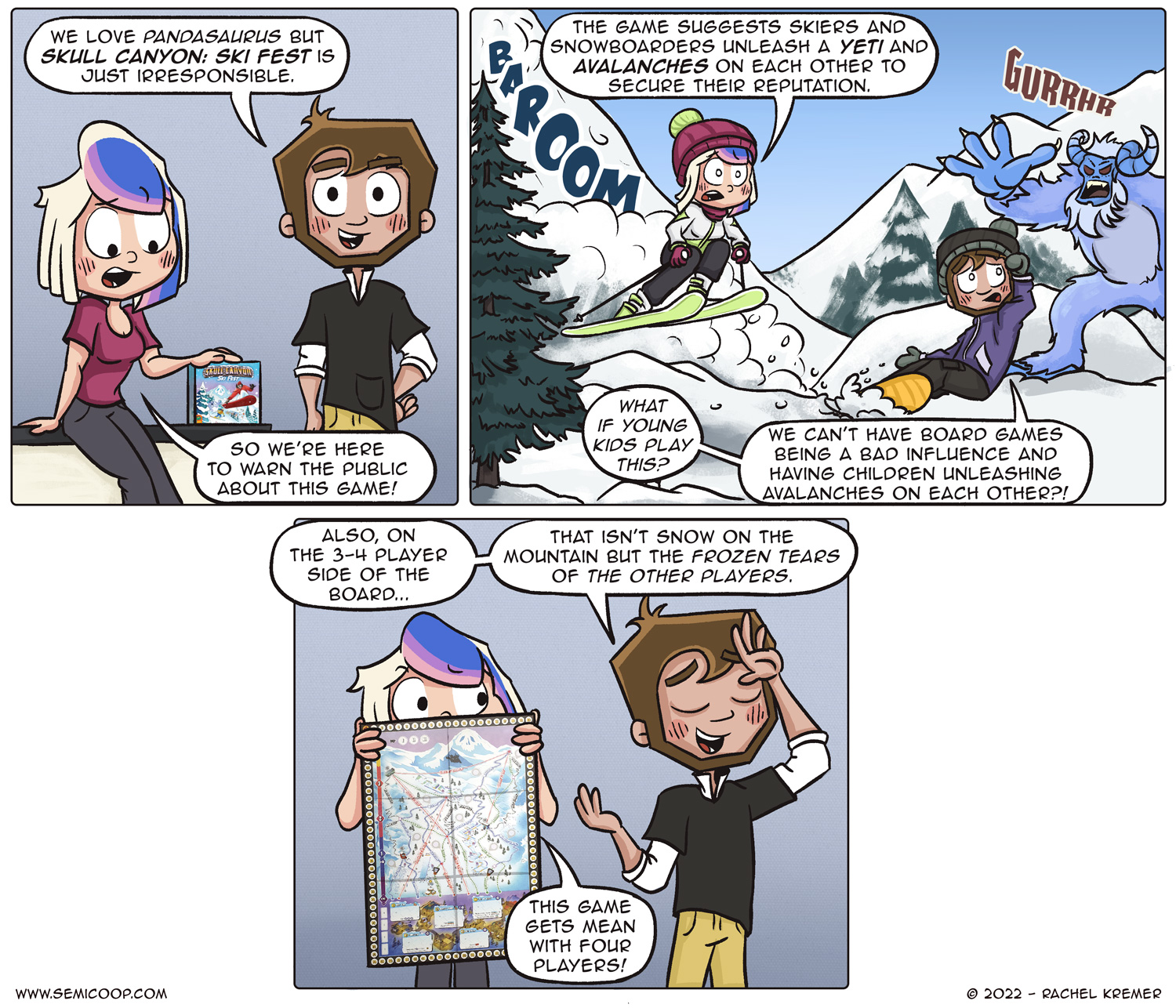 Skull Canyon: Ski Fest was kindly provided by Pandasaurus Games for free. We thank them for giving us this game that led to this comic! For more information on how we deal with gifted games, please see our FAQ!

Skull Canyon: Ski Fest has been in our collection for quite a while and we’re happy to say that the game is now available in stores! It’s a fun game that’s rich with theme and also humor. It’s an accessible game with a mix of known mechanics, most notably collecting sets of cards to be able to make runs which reminded us of Ticket To Ride for example. Although Skull Canyon just requires players to have a number of cards of the same color OR symbol, depending on the difficulty of the run.

When we first played the game with just two players, we thought it missed a little bit of confrontation but that might also have been because it was our first game. Now that we have experienced a full four-player game, the game turned out to be quite mean. A lot of sighs and moans at the table when avalanches forced players down a run they really wanted to complete before the day was done. We might have to try the game again with the two of us and see if we would play more “aggressively” this time. The game does come with a special two-player side on the board, so they have definitely tried to balance it out for two.

Let’s take a look at what we played last week. That was a varied bunch of games! Heinze played a solo game of Five Leagues from the Borderlands which he was rather excited about. He did say that he wanted to try playing it on a grid to make combat quicker. On Monday evening we played Escape from Colditz. It’s not a difficult or fantastic game, but we just had a great night with friends. 🙂

The following night we played a game of Galaxy Trucker (new edition) and we’ve noted down for our future selves that next time we’re just going to make three runs with the medium-sized ship and we’ll compose our own hazard decks to increase the difficulty. We think the game is fun, but we’re going to take out the bits we like the less and see how it plays then. Are there games in which you’ve mixed up the rules to make an experience you like better?

On Friday we played a game of Unstable Unicorns and Libertalia: Winds of Galecrest with five players and, to prevent this blog post from getting way too long, you can read on our Instagram what we think of it! To top off this interesting list of played games, we played Lords of Waterdeep (with all the expansions and fancy bits) on Saturday! We forgot how good this game is, especially the corruption track adds so much to this worker placement game!

What game gets really mean with a higher player count?

I would think that with more players people would be less likely to target anyone in particular.

In Skull Canyon: Ski Fest avalanches, for example, have an effect on all players that are still on the mountain – so it happens more often and it somehow unleashed more competitive gameplay. Maybe because your plans get screwed up more often you’re frustrated and are actively trying to take away runs from other players? I can’t really explain it. That is why we need to try it again with just the two of us and see if the first time that we played it we were just playing too “nice”?

True- avalanches are more likely on the 2nd and 3rd day because of the avalanche charges you can buy in apres-Ski. But there is also some gear that you can buy to protect against avalanches and yetis. I’ve seen a lot of different strategies employed to win. Also- avalanches have an affect on the skier who deploys it also (after they’ve completed their run) so I’ve noticed some players being reluctant to use it- only when necessary to protect their run claims. It’s not mean- just strategy! Ha ha!

I love your comics, by the way! Always funny and well drawn!

Honestly, Ticket to Ride can get extremely cutthroat at high counts. Getting the only route from Nashville to Atlanta. Even the double routes get sucked up quickly. Having picked up SC:SF because of the mechanics, I can already see this getting heated. Luckily, it will easier pill to swallow than TtR since runs can be hit several times so nothing is permanently locked.

Players compete to see find out who the ultimate skier is by taking the most difficult runs, collecting the best gear and scoring the most points. But... what's out for sudden avalanches triggered by other players and avoid the Yeti! You can learn more about the game at: BoardGameGeek.com