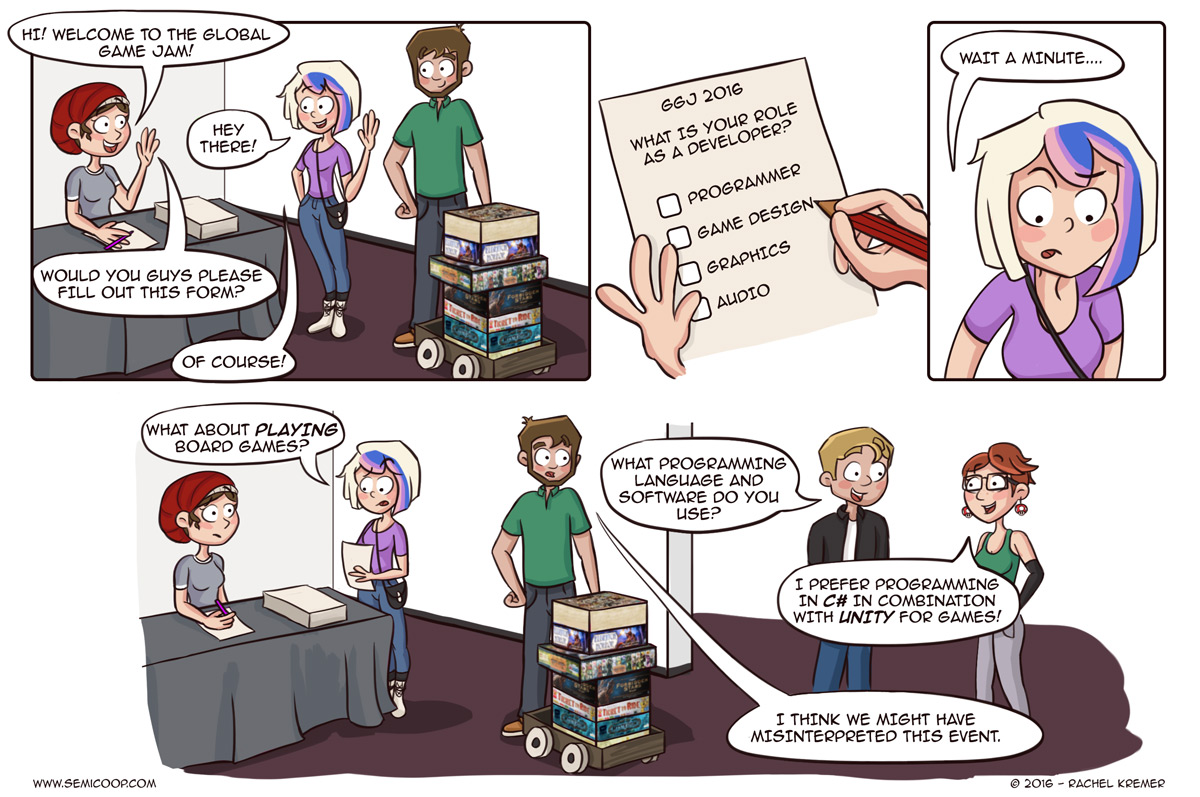 My creative background is far more related to game development than to the world of comics. Me and three friends started a game company called Firedroid for which we worked part-time for a couple of years. We made our own games for mobile devices and we were pretty darn good at it, if I might say so (check out Barrr, Kings Can Fly and Ice Cream Nomsters 😉 ). Every year we team up (with Heinze as our 5th Beatle) to join the Global Game Jam in our hometown. Firedroid might not be among the living anymore, but the Global Game Jam tradition still is alive and kicking.

But the Global Game Jam is not just about making digital games. You’re not limited to a digital medium and can create whatever you want during the 48 hours of the event. There’s a world wide theme on which you have to create your game. Well, you don’t have to, but it’s fun to see what all the participants create based on the same theme.

This year’s theme was Ritual. We made a game called Friend()? in about 28 hours. Quite an abstract game for our doing. The game hasn’t been uploaded yet, but probably will be during the day if you’re interested. It’s a platformer game in which you have to collect triangles for an imposing AI that commands you to obey its obsessive, particular orders. You have a choice to obey or to ignore those commands.

In the mean while you can always play the game we made 5 years ago during the Global Game Jam: You Keep Dropping These Things and You Don’t Seem to Notice. We still love that one.

<-- An example of the simple but fun animation work we made for the game. Bringing a simple rectangle to life!

Would you ever like to design your own board/card game if you got the chance?

global board game jam sounds like a cool idea though

Actually on Malta there have been some board game winners of the global game jam, “… and then we held hands” won in 2014 and the Mountain won in 2015 http://globalgamejam.org/2015/games/mountain-0. So maybe there should be more board game jams!

Wait, what? I’ve been following this comic for months now, and only now I read that you were part of my friend’s company? Say hi to Willem for me!

Haha, I will! 😀 Oh btw, here’s a fun game, spot all the ‘appearances’ of Willem: https://dl.dropboxusercontent.com/u/846065/GGJfriend/index.html

I spent the GGJ this year making a Hidden Movement Game (a -la Fury of Dracula and Scotland Yard): http://globalgamejam.org/2016/games/bane . It turns out that, if your game takes an hour to play then you don’t have a lot of opportunity to test it. Was fun though.

That’s so cool! I’m really curious about the proces, we tend to nail down a broad concept on friday, complete a fully playable game loop at the end of saturday and polish on sunday. How does it work with boardgames? Did you work in a team? Do change the game during a test game, or do you complete a play before changing things? Are there tools to do calculations for balance etc?

as host for a gaming event in Enschede, i usaly invite a group that has a test game. in the past visitors have tested games, gave advice, complaints, etce. becaus the visitors pool is open to annyone the game is tested by a diverse group of people.
if annybody has a bordgame thay wond to get tested contact me at: bordspellendag@gmail.com
to vind more info about the game event check: http://www.bordspeldag.nibz.nl/
its a site that has all bordgame related events in twente on it (in dutch).