People who have been following Semi Co-op on Facebook and/or Twitter might already know this comic. We posted it about two years ago on social media, but very little people actually saw it back then. With GenCon coming up this week, we think this comic is still very relevant so it has been redrawn. 😉
Flying over to the USA just for GenCon is not really an option for us, so we’re happily joining the bigger crowds at GenCan’t – which can be enjoyed from the comforts of your home, a friend’s place or your friendly local gaming store!

So you can even win prizes at GenCan’t by participating in their photo contest or join the raffle. Check out their Twitter account (@gencant) for up to date information. They also have a big list of free Print & Play games which you can play. In other words: there’s a lot to explore and GenCan’t is a wonderful reason to play a lot of games this weekend.

What games will you be playing during GenCan’t? Or if you’re actually going to GenCon: what games are you looking forward to?

In other news: sad news has reached us last Friday. Our fellow board game comic makers, Tiny Wooden Pieces, will be uploading their final comic this Friday. We respect and understand their choice, but the comic and their insights will be sorely missed. They’ve done an amazing job these past three years and they were a true inspiration. Thanks, you guys and good luck with your future endeavors. 🙂

My FLGS just started carrying Flamme Rouge, and – because of the Shut Up & Sit Down effect you address in your Captain SONAR comic – snagged a copy without hesitation. 🙂

It’s so good! … and in my opinion, worth having alongside Formula D if you’re a fan of that game.

They might look redundant – moving bicycle minis down a track instead of cars – but they play with satisfying distinctions:

Formula D’s excitement comes from the gear/dice decisions you make, pushing your luck as you handle each corner … rolling big, but not TOO big and crashing into a wall.

Flamme Rouge isn’t about gunning it blindly down the road either, it’s about how you get that key push out of your two – yes, TWO – cyclists to break from the pack and dash across that finish line when the rest are left huffing and puffing in exhaustion.

It’s rules are simple and brilliantly capture this feeling and mentality. Each player has two cyclists and each cyclist has a unique deck of cards of low, single-digit numbers that decide how far the bike moves down the road when played.

However, one of the cyclists is the Sprinteur and his deck has a few game-changing 9s in it, making that dash to get back in the race or taking the lead.

However, however … being a leader is actually less than ideal, as after each round, those who are in the front of their respective packs add an EXHAUSTION card to their deck that is a crummy value 2.

However, however, HOWEVER … before the hard-working leaders suffer exhaustion, those peddling in their wake might benefit from DRAFTING! Any groups (including single cyclists) that have a gap of exactly one space from the group in front of them, close that gap by moving forward. You look at and move each group starting from the back … so it often happens where a group will move forward to join the group in front of it, then THAT group closes ITS gap to the group in front of IT, resulting in those cyclists in the back getting 2 free spaces of movement.

The result is an exciting time where the phrase “it’s still anybody’s race” rings true until the very end. Even when, halfway through the race, new players learn that it might not be the best idea to burn through their 9s so soon, finding themselves weighed down with exhaustion cards, they can avail themselves with strategic drafting when the other cyclists overtake them.

My gamer-buddies loved it, my family got into it … so glad I trusted in the SU&SD effect! 😀 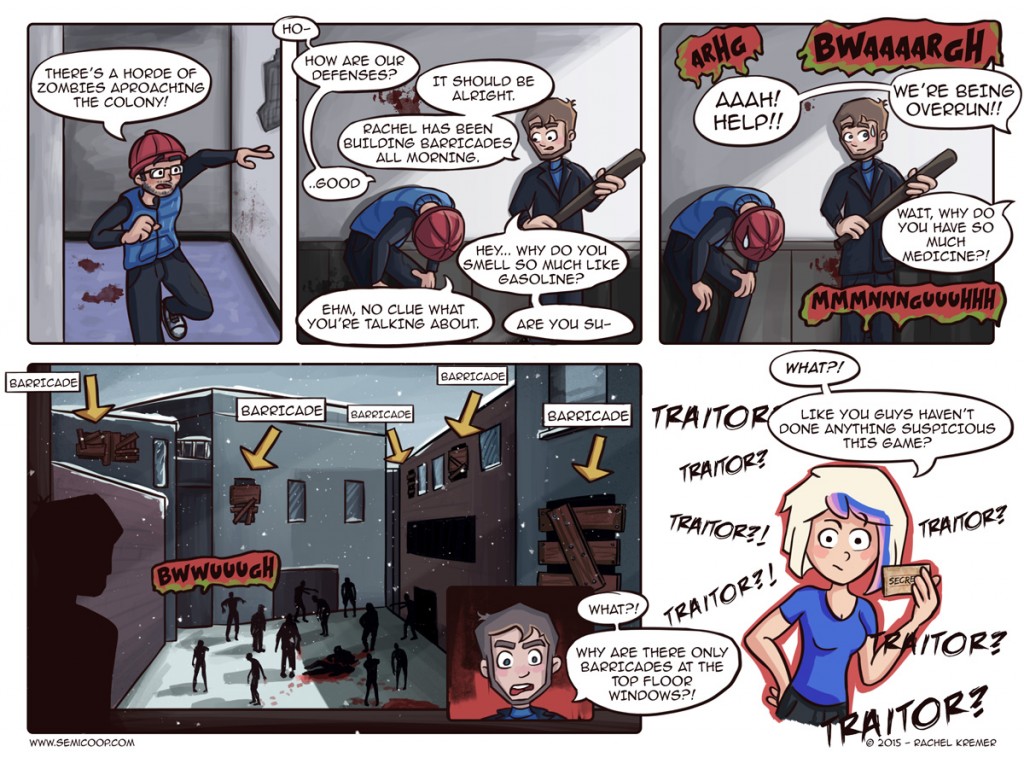