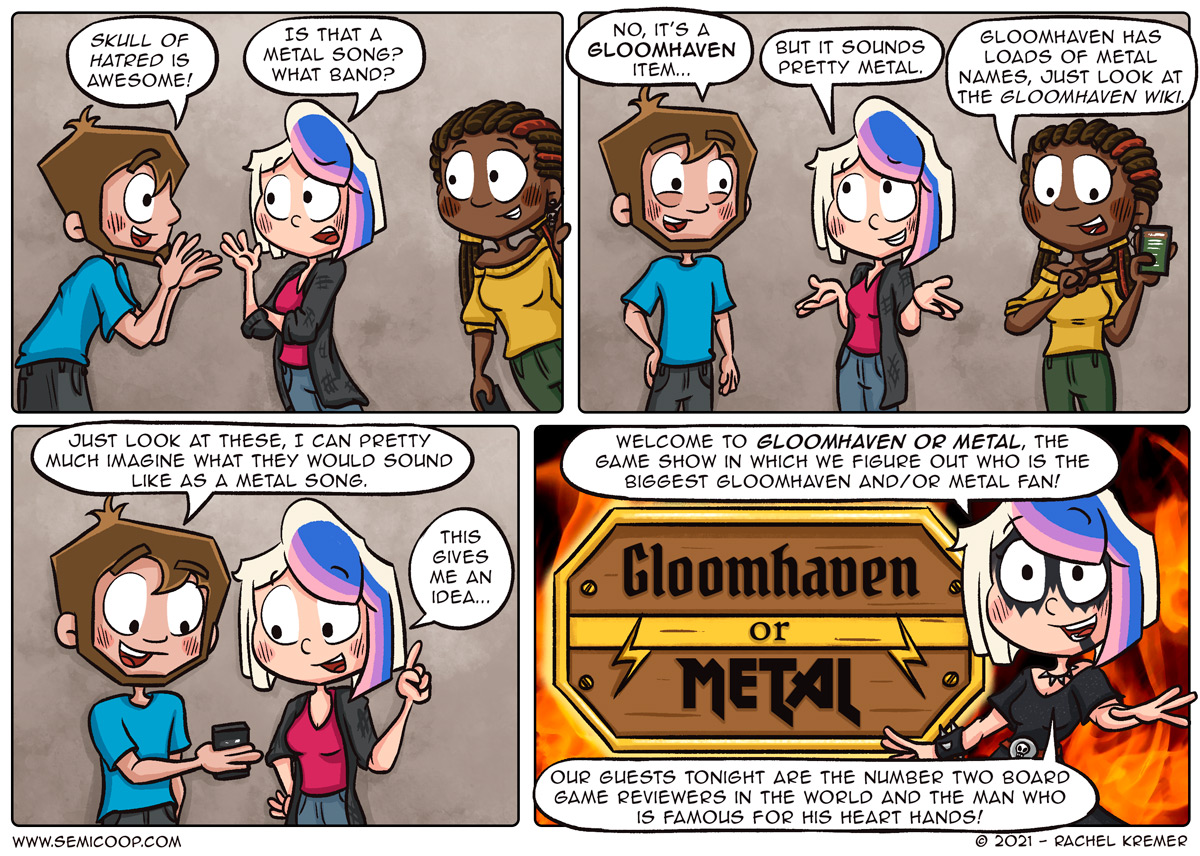 This is an idea that has been in our heads for a long time and we’re happy to finally present you: GLOOMHAVEN or METAL? A quiz in which you can test whether you can tell apart Gloomhaven from Metal music! It turns out this is incredibly hard so please give it a try to prove our point that the two are often indistinguishable! You can test yourself here: www.semicoop.com/gloommetal

I scored zero points the first time and so did our friend with who we’ve been playing Gloomhaven for over two years now. So, good luck! 😀

In other awesome news, BoardGame Heaven has made Semi Co-op micro badges on BoardGameGeek and they look so cool! If you’re interested, you can find them by clicking here. If you don’t have any GeekGold, send us a message and we’ll be happy to donate you the gold that you need.

Last week, the world around us was covered in snow here and that meant a lot of walks outside and we also made our traditional Calvin and Hobbes snowman! There was plenty of snow, but it wasn’t sticky at all, so we couldn’t make something as big and magnificent as we had originally hoped. Nonetheless, we’re pleased with how our snowman turned out!

Being outside a lot, we’ve mostly played shorter games last week. A game of Patchwork, Arboretum and It’s a Wonderful World. We enjoyed playing some “older” titles and also decided to play Above and Below again now that everybody is raving about Sleeping Gods. I instantly fell in love again with the world of Ryan Laukat’s games and we hope Sleeping Gods will hit retail somewhere this or next year since we didn’t back it on Kickstarter.

We also received our first new game of 2021 and it was Umbra Via from Pandasaurus Games! We’ve played it two times so far and we find this abstract game super interesting. Definitely one we’d like to play a few more times before we can really give an opinion about it though, so I’ll get back to that in a future post.

How many points did you score?

0 points. Haven’t ever played Gloomhave or listened to Metal that much 😀

5 out of 5. Not bad based on not being a big metal fan, and having only played Gloomhaven a bit past the tutorial in the app so far.

Oddly enough in typing this it kept correcting to Bloom haven. Apparently a vaiation of Bloom haven designed by Berkeley Breathed.

3 outta 5, never played Gloomhaven or listened to those bands.

2 out of 5, and only because one of questions has been answered in this comic XD

Also, can somebody explain to me what does “heart hands” mean?

That thing when you put your extended thumbs together by the tips and then bring the rest of your fingers together so that their nailsxare flat against each other and the space within your hands is roughly heart shaped.

Huh, I thought it was something different… Now I am even more confused, what does heart-shaped hands have to do with metal?

Ha ha! 5 for 5! Let’s just ignore the fact that it was my second try and one of the questions got repeated. First try was 2 for 5. To be fair, I do not listen to Metal, and I have not played Gloomhaven.

I scored 4 out of 5, using the age old, tried and true method of randomly guessing.