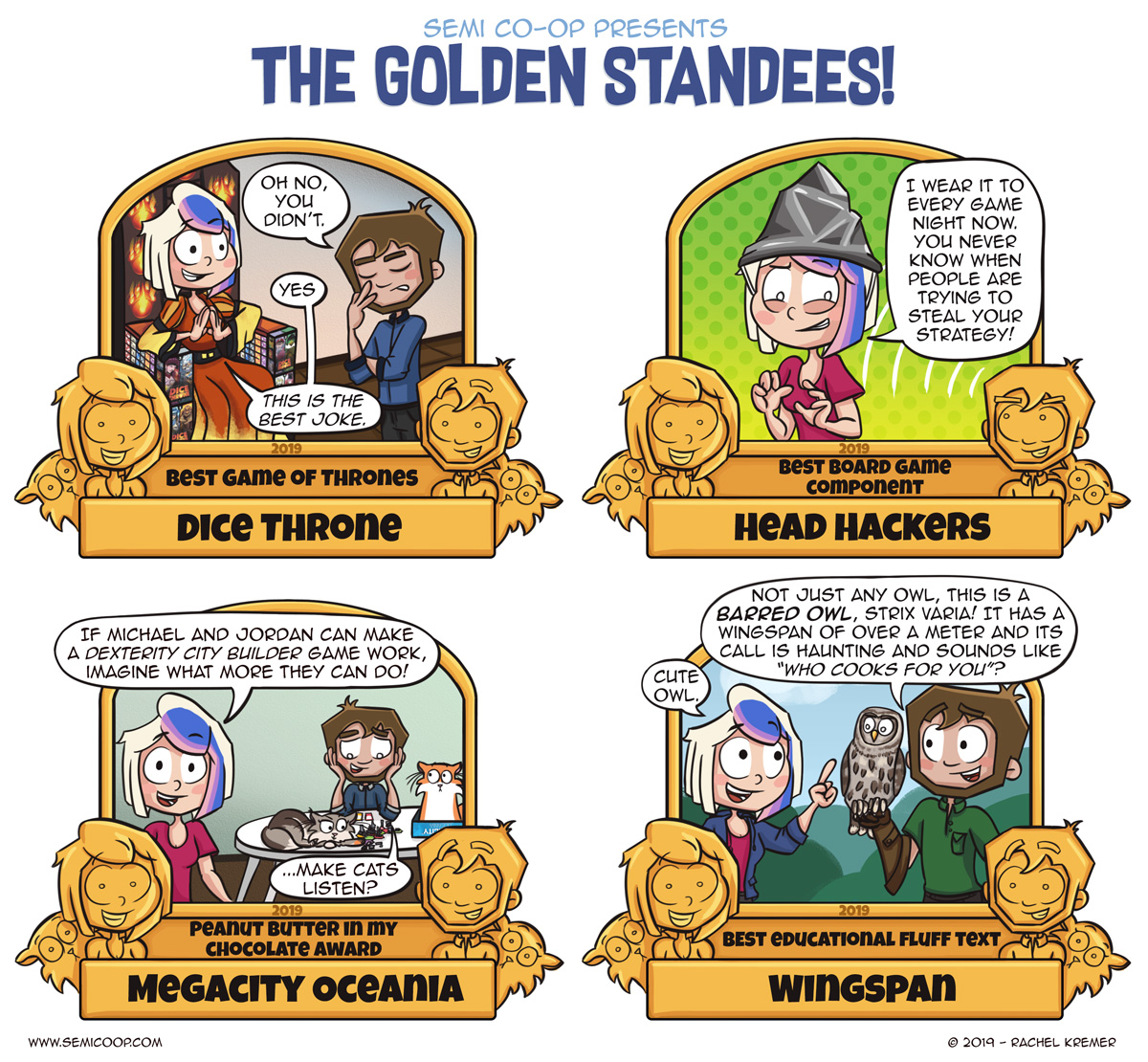 It’s time for the most prestigious awards in board gaming webcomics, the Golden Standees! In previous years we also gave out awards for noteworthy things in gaming but this year we decided to cut it down to four awards and only give out awards to games we’ve played and enjoyed. So let’s talk about the games!

Dice Throne:
This is our second most played game this year (after Gloomhaven), which is not something we expected when we picked up the Cowboy VS Samurai set. Dice Throne is sort of a battle version of Yahtzee with players trying to get the right combination of symbols on their dice to trigger attacks and abilities. Combine this with a deck of cards that helps you upgrade your attacks or shift the odds in your favor and suddenly you have a great battle game that is exciting and doesn’t take too long. It also has great production with a portable insert for every character and awesome player boards which makes it a treat to play.

Head Hackers:
Big Potato games are always something special and have components you won’t see anywhere else. Head Hackers comes with a very silly tin foil hat that functions as a marker to show which player writes down the hints in this round and everybody we played it with loves it and actually wears it when it’s their turn. The game is sort of a competitive team version of Just One. One team member wears the (now award-winning) hat and has to write down three one-word hints to describe the word shown on a card. Other teams get to see the card as well and have to guess which three hints the hat player will write down. The hat-wearer gets points when their team correctly guesses the word on the card and receives bonus points for every hint that wasn’t guessed by any of the other teams, the other teams will get points for every correctly guessed hint. We’ve seen some really clever hints and guesses during our plays of it and even non-gamers get intrigued when you show them the hat.

Megacity Oceania:
We played Megacity Oceania for the first time at UKGE and Michael started off with “So Megacity Oceania is a dexterity city building game” made us smirk until we realized he was serious. The game somehow really works well, we do advise to play with four players as you want to create as much “downtime” between your turns as you can (that is when you get to build your buildings). The game has enough room for a bit of strategy and choices that matter without losing track of the actual building and the dramatic moment somebody has to push their building slowly to connect to the city without any accidents.

Wingspan:
Wingspan is winning all the awards for all sorts of good reasons but we wanted to reward it for its great use of fluff text. Most of the time fluff text is used to give a bit of insight into a fantasy world or events that relate to the card. Wingspan shows some facts about your birds and while this sounds like something a boring educational game would do, these texts are somehow fun and interesting and make you feel more invested in the bird than “this one will give me some extra eggs”. We love it and we hope we’ll get to see so many expansions that all the bird ever will be included in the game someday. 😁

So that’s it for us this year! We hope you have a wonderful new years eve and we wish you a splendid 2020!

Which game would you like to give an award this year?

In the second sentence you say Dice Forge 🙃

Battle all sorts of cool warriors using your wits and... dice! Upgrade your character's attacks with the cards in your deck and help fate a little by manipulating your dice and your opponents' dice! More information on BoardGameGeek.com!

In this party game, you have to make your teammates guess a word based on three one-word hints. Only the other team will get a point if they correctly guess one or more of your hints...

A city building game in which you actually construct the buildings! In Megacity you try to fulfill contracts by making buildings out of plastic pieces and pushing them to the center of the table without making them fall over.

The perfect game for people who like birds... and competitive engine-building games! In this game, you try to attract the best birds to your wildlife preserves by feeding them the right food tokens. With over 170 unique bird cards, this game will not grow old quickly. -- Support us by using our affiliate link or visit and support your local game store! Amazon.com