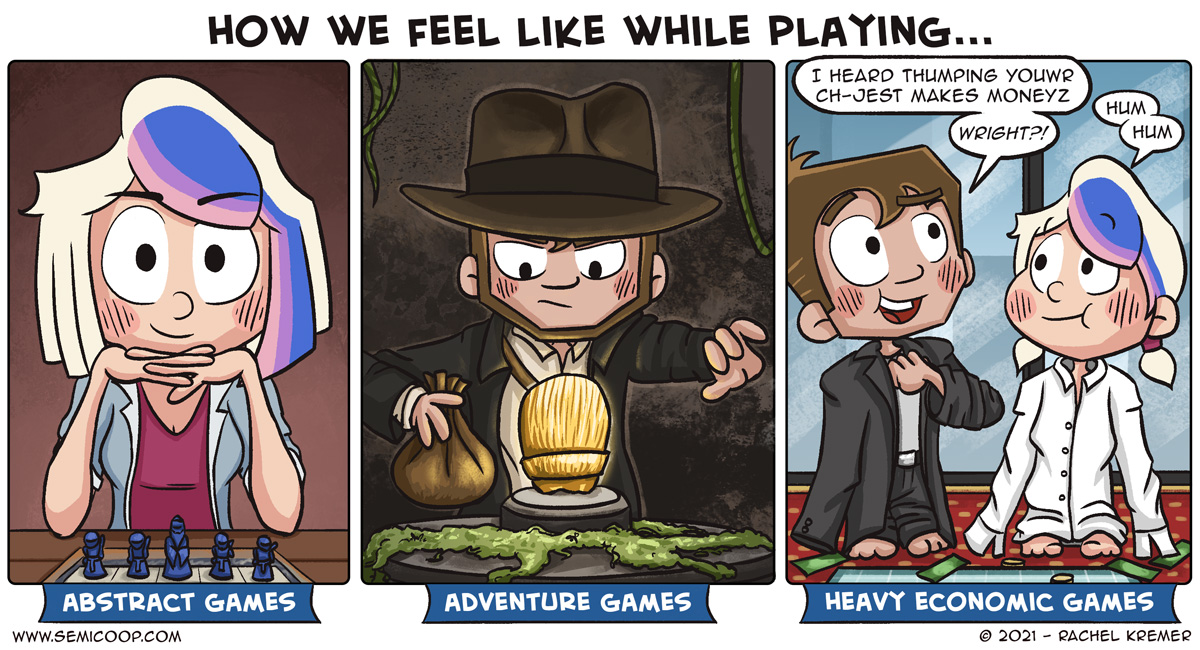 Games can make you a certain way. When we’re playing a game of Lost Ruins of Arnak, we feel like cool adventurers, exploring and finding treasure. When we’re playing games like Hive and Onitama, we feel cool and calculated. But… when playing heavy economic games like Food Chain Magnate, for example, we both often have no clue what we’re doing. We don’t play them very often, that certainly helps. 😉

Speaking of games we do understand, Villagers! Sinister Fish was kind enough to have us on as guests playing Villagers, with the upcoming Shifting Seasons expansion, live on their awShux stream! We played together with Dave, the owner of Sinister Fish and Haakon, the designer and Rachel won! While we hope we get to play with Dave and Haakon at a con someday it’s also nice to know Rachel has a 100% win rate playing Villagers against the designer of the game. Click here to watch it!

Other than that we have completed the It’s A Wonderful World War or Peace campaign which was fun and we’re looking forward to trying the Leisure and Decadence campaign when it comes out in retail. Or… if we can’t wait, we’ll order it from La Boîte De Jeu’s website. 🙂 We also tried Mandala Stones which is a nice abstract game but we’re going to try it a few times more to see if it is a classic or just a fun game. It does look incredibly pretty so if you like pretty games with few rules but hard decisions, you should check it out.

And in non-gaming news, since we haven’t been able to go bouldering for over four months now and the weather is starting to get better, we’ve started slacklining! We’re still not really good at it, but it’s a ton of fun. Have any of you ever done this? And we’ve found a freely accessible outside boulder wall on the grounds of our local university and that certainly was a highlight for us this past week.

This week, if everything goes right, we’ll get an advance copy of the upcoming Ruthless expansion which has got us excited. We always thought the pirate themed deck builder does some fun and different things which makes it unique, so it will be cool to see what designer and illustrator Roland has done to make his game even better. We’ll let you know!

What game makes you feel like a bumbling child?

Any and every dexterity game!

“I’ll put the thingy on the wotsit and-”

Terraforming Mars. I keep thinking I got the hang of it and am doing well….until I get to the end and it’s like “Wait, how in the….?”