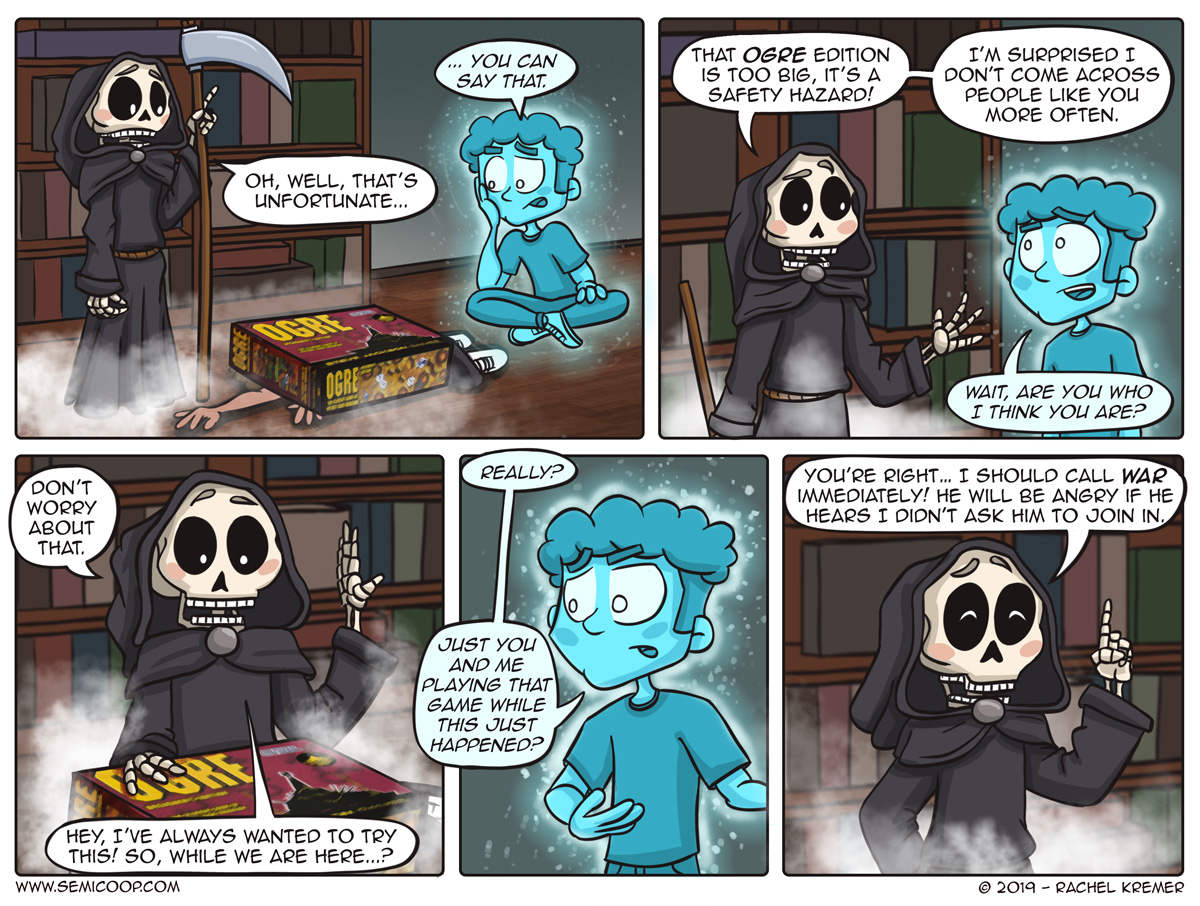 It’s the return of Death! This is our third comic featuring everybody’s favorite cloaked gamer and we’ll probably see him again as it allows us to tell different types of jokes than when we’re focussing on ourselves.

So December is turning out to be a very busy behind the scenes month for Semi Co-op! We’re publishing an additional sketchie every week for CoolStuffInc, for which we also selected some cool titles for our very own Holiday Gift Guide! We’ve picked some games from recent years that we think will please a lot of different gamers, so if you are looking for some inspiration for what to give to a friend, loved one or really anyone, you should check it out!

We’ve also been busy writing Christmas cards and our secret gift for our Patrons, which is going to be something completely different but just as cool as last year’s tiny dice tower. Also, we’re really close to being able to talk about something big for next year which we’re very much looking forward too!

This also means we haven’t been gaming as much, we’ve played London: Second Edition because we realized after putting it on our Gift Guide that we hadn’t played it in a long time (it’s still good!). We also played Megacity Oceania with four players, which is a lot better than with two players. It’s just such a fun unique blend of dexterity and strategy that we think you really should try it if you have the chance.

While we are not playing as many games right now, we are making some cool gaming plans for the holidays and next year. We’ve gathered a really cool group for the King’s Dilemma and Friday we’ll combine two copies of Getaway driver to play the four-player version, which should be a lot of fun!

Do you have any gaming-related holiday plans?

If he won would he get to go back to being alive? Or is that just if they play chess?

Hey, Death’s back! Nice to see you again.💀

Litteraly, Right now I’m in Sri Lanka sitting in a Pub and I have lost two games of Wizard against my friends. Those two normally don’t like games so I didn’t bring much games with me. I will maybe show them my PNP of Campy Cratures but we surly didn’t come here to play.
Happy Holidays!

While the original edition was published as a microgame, this 24 pound (11 kg) version is anything but! Ogre is a war game about futuristic battles in which cybernetic mega tanks called Ogres are the most powerful units on the battlefield.