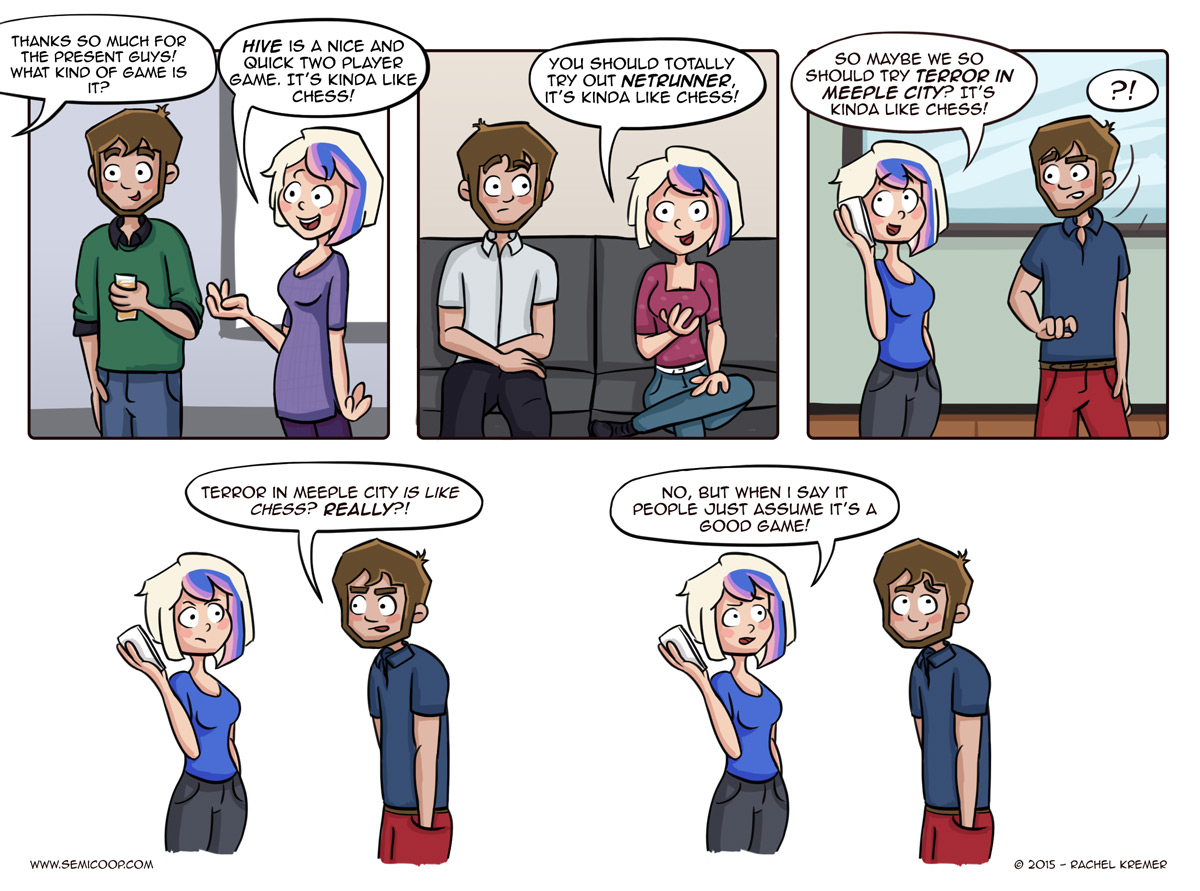 Now Hive actually is kinda like chess. I always describe it as a light version of chess. Only a lot quicker and more fun in my humble opinion. And I did make the comparison of chess and Netrunner in the past, because Netrunner requires a lot of brain power… just like chess.

There are so many board games nowadays that it is hard to make a comparison to explain a game to somebody! I could say that something is like Mysterium, K2 or Smallworld, but most people that aren’t (very) familiar with board games won’t know any of those games. But everybody seems to know the classics like chess, draughts, Risk, Battleship, Monopoly and (nowadays) Catan. Maybe I should just stop trying to explain a game by comparing it to other games.

Terror in Meeple City (or Rampage) certainly is one of those games I’d love to play with our nephews when they are a little older. It looks like a lot of fun. But it’s certainly nothing like chess. 😉

So do you know any games that are actually kinda like chess? (Hive not included)

When people say “like chess” I always think of The Duke. Maybe too on the nose? So much quicker though, smaller board. interesting twist that pieces change movement style but easy because it’s printed on the piece =) .

You probably use chess because it is a) one of the classics b) well known (in the western world) c) lots of possibilities and therefore it symbolizes a game which can use up a lot of “brainpower” d) and since it’s a deterministic zero-sum game, if nobody makes a mistake the better player should always win). So any of the “other abstract deterministic classics” would qualify: Go (got even more possibilities and still the humans haven’t been beaten on a equal playing field by computers unlike chess), Abalone, reversie/othello, etc. And there are a whole lot of games which falls into this (classic) abstract game family category.

But in the modern board game age: Duke and the whole GIPF-familie would qualify.

For the Crown (which is basically Chess: The Deckbuilding Game). I think the solution is to hang out in a crowd where “the logistics of Roads & Boats, but with a Thebes/Olympos style turn timer” makes perfect sense. Bonus points if anyone figures out what game I am thinking about. Double bonus points if someone points out a game that fits this description that wasn’t the one I was thinking about, because then I’ll have another game to go drool over.