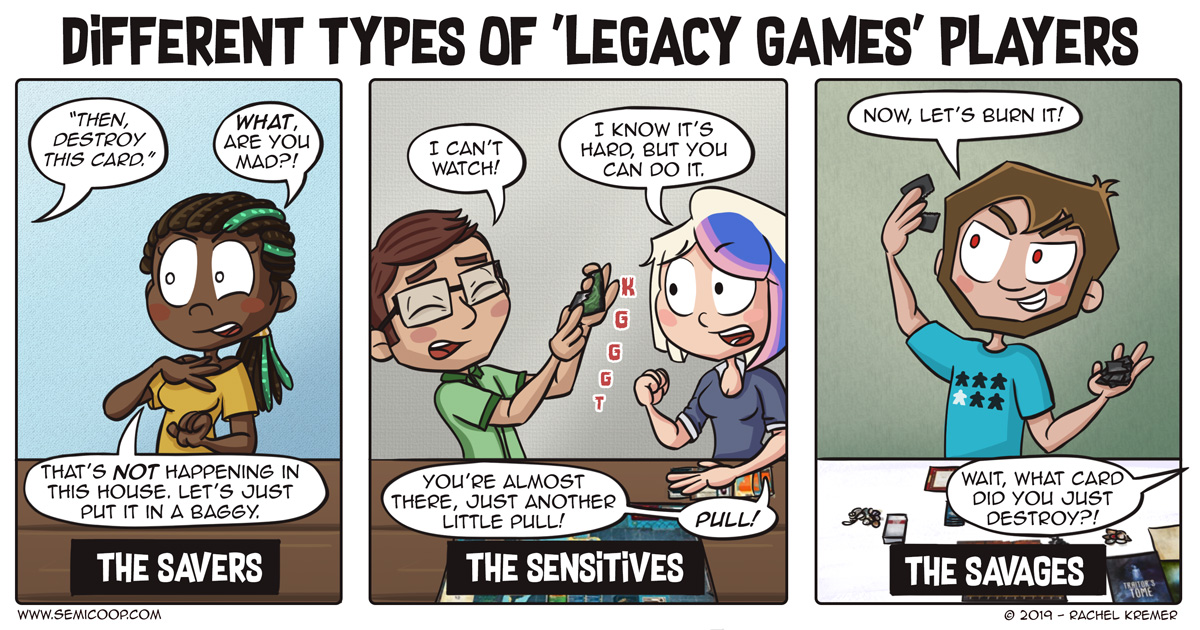 Ahhh legacy games, while not as prevalent as a few years ago our ears still perk up every time we hear somebody tell about their experiences. Did they make the same choices we did? What did they do with the cards they had to destroy? Would they play a legacy game again? It’s an experience that really sticks with you and it’s great to have somebody to talk to without having to fear spoiling the campaign.

Right now, we’re playing through a Charterstone campaign but other than that we’ll probably wait until Pandemic Legacy Season 3 comes along until we start a new one. We have played a lot of other things! We played some Dice Throne and The Binding Of Isaac Four Souls which we enjoyed even if it’s best described as “better Munchkin”. We also played a successful game of Century Golem with the nephews (6 and 8)! They picked up the game really well and the only changes we made were the removal of the coins and shortening the game to three golems. They loved the golems but were a tiny bit disappointed they couldn’t make the golems battle each other. 😂

We’ve also got a bunch of new games we can’t wait to try. Big Potato games sent us Blockbuster which is sort of a movie-themed version of Monikers, they showed the game to us at the UKGE and we really like the idea of making friends guess movies based on your reenactments or quotes.
Osprey sent us the beautiful new Gasland Refuelled hardcover, which combines the base game rules with all the free online expansions and some small balances on stats. Several friends have been requesting we’d organize a Gaslands day again, so the book is a very welcome additional motivator to mod some Hot Wheels again.
Osprey also sent Undaunted: Normandy and Jonathan Strange & Mr Norrell. Both titles look amazing thanks to the illustrations by Roland MacDonald and Ian O’Toole. We can’t wait until our summer break begins and we get to actually play all these games!

Speaking of Summer, we put a call out on Twitter for guest artists to help us and we got some great responses. We’re contacting artists now, so if you mailed us and we haven’t responded yet, we’ll get in touch with you this week.

What type of legacy player are you?

I will gleefully destroy components if I’m told to by the game :). I’m yet to go to the effort to actually burn any game components.

Or even if I’m not told to.. – I ripped up a Viticulture visitor at the weekend (to the shock of the other players) – It was a pure take-that card targeting a single player (‘player to the left’) and I want none of that crud in my games (Attacking all is more acceptable since its largely akin to gaining for yourself).

I will almost never destroy a component. It’s much more fun to force other people to destroy them.
Second Rule of Legacy Game Night: if you haven’t destroyed a card before, you are destroying the first card that needs to.

Century Golem is such a good game to play with my kids, they really enjoy it, and the artwork on the cards is beautiful.
How is Gaslands? I’ve been hearing a bit about it lately (Tycho on Penny-Arcade has been sucked into it), but can’t work out if it’s more like a board game or a tabletop miniatures game like Warhammer… I like the sound of being able to craft your own cars from matchbox toys and stuff like that though, that sounds like a lot of fun…

@Chris Gaslands is great! It’s a lot like the X-Wing miniature game but it has a much higher level of DIY as there are no official miniatures etc.
All you need are the rules, which cost about $13 online, some movement templates, which can be printed on some cardboard, and if you want to get fancy you can get some Gasland skid dice, which a lot of Etsy stores sell.
The first time we played everybody brought some cars and bits and set a two hour timer to put some cars together, which was enough to create a field of lovely Mad Max cars. Just make sure you don’t go overboard on the number of vehicles because the playtime will expand with each extra vehicle (we advise a max of 6 for your first game).