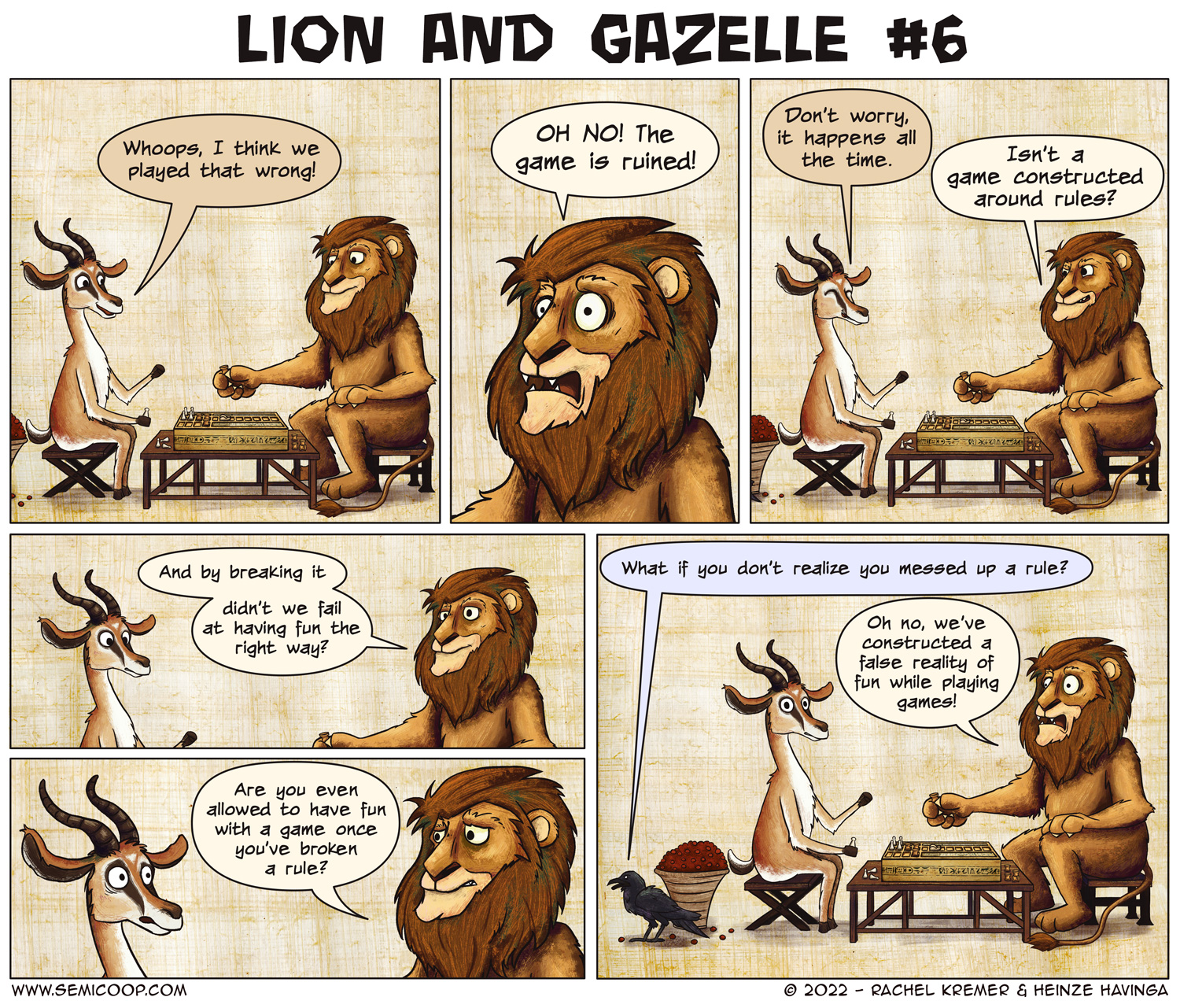 Lion had thoughts that needed to be shared with the board gaming community. Are rules absolute or just guidelines? Is having fun more important than playing something “right”? If you played a game wrong – would you still log your score on BGG for example? And what about house rules?! So many thoughts! 😉

We played the complete opposites if it comes to rulebook thickness this week. On the one side there’s Caldera Park and Turing Machine and on the other side was… Deal with the Devil!

Playing Deal with the Devil was high on our list but we had to find the right people to play it with and that was slightly more tricky since the game can only be played with precisely four players! We ended up playing it with some fellow-bouldering people that turned out to have even more board games than us!
In Deal with the Devil, two mortals, a cultist, and the devil players will see who’s the best and try to figure out who is playing who. The unique part of this game is that all players have a chest in which they can offer goods and ask what they want in return (money/souls) during the Deal Phase. Your offer will be passed to two random players before it returns to you and then you’ll know if somebody thought it was worth it.
What makes this special you ask? Well, that’s where the mobile app comes to play. You scan the QR code on the bottom of the otherwise identical-looking chests and the app will tell you how they are distributed among players. That way, it’s impossible for you to receive your own chest or the same chest a second time during a round and the right chest is returned to you at the end of the game.

At its core, the game is a eurogame. You’re busy gathering money (or taking loans…) and resources to build buildings that have special actions you can activate and all buildings are also marked with an icon that can be used for set collection. If you’ve built 3 or 5 with the same symbol, you unlock achievements that are worth points, etc, etc. The asymmetry of the roles changes things with the end scoring a little though. The goal of the devil is to obtain as many soul pieces as they can (each mortal has three, the cultist two)  during the Deal Phase and they score points with that at the end. The Cultist is trying to sell their soul to the devil and maybe collect some mortal souls in the process to protect themselves from the inquisition in round 3 and 5. Yup, being able to show your innocent mortal soul pieces to the inquisition can save you a lot of trouble so it’s important for humans not to give them away too easily.

There’s a lot going on in this game and it seemed a little daunting at the start but once we were playing it, the game was actually less complex than we had suspected. We do think that when we play this game a second time with the same group, everybody would be more actively trying to find out who’s the devil, the cultist, and the mortals. It’s a charming game with some dark humor so it’s important to remind yourself that it’s set in medieval times. Definitely looking forward to playing it again.

There! I think that’s the longest first impression we’ve ever written on our blog. 😀

Does discovering you’ve broken a rule spoil the fun for you?

I once had a Power Rangers game as a little kid. I don’t think either me or my sister ever read how you were supposed to actually play. We just liked making the little cardboard characters fight each other.

For some games, it’s almost expected that you’ll break several rules, and that’s fine. If I have time and I enjoy the game, I’ll fix it the next time I play. Some rules are crucial for game balance though. Years ago, I played Munchkin with someone who read the rules poorly and it was obvious that the misunderstanding broke the game in exploitable ways. That did spoil the fun for me.