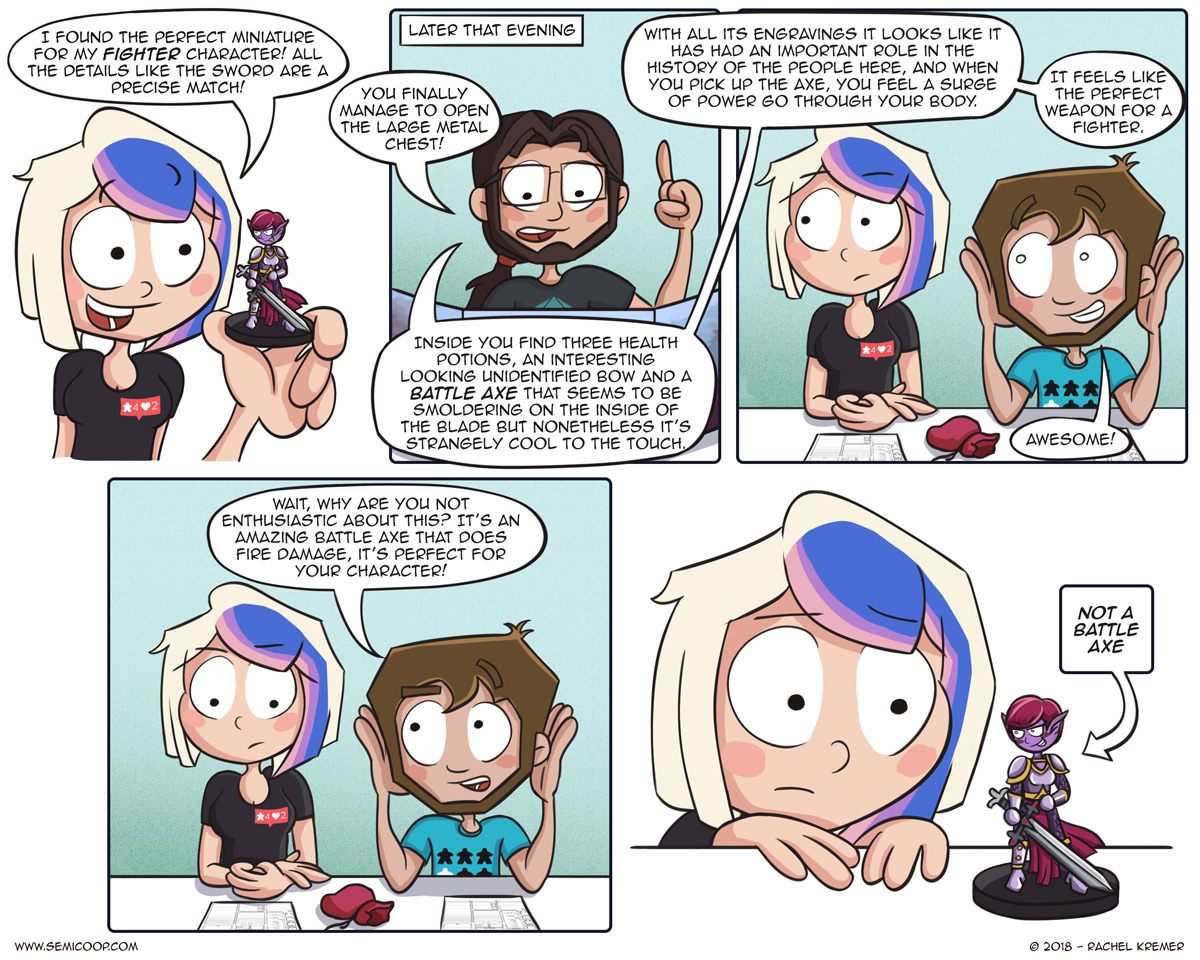 (You can get all the shirts you see in this comic at our Threadless store!)

We were discussing this situation a while ago and I think I actually would be slightly bummed that my miniature wouldn’t match anymore after the character finds a new amazing weapon. 😉

Talking about a completely different role-playing game: Hush Hush Projects was very kind to send us the game Fog of Love, thank you!). It’s best described as a romantic comedy simulator in which players play a couple and have to deal and react to all kinds of different ‘real life’ situations. It’s about finding a balance between your own goals in life and combining that with a life with your partner. We’ve played the tutorial last week and we can’t wait to crawl into the skins of some slightly awkward characters again and see if their relationship is doomed or they turn out to be a good fit.

It’s almost time for the UK Games Expo and we’re really looking forward to it. Our schedule is slowly filling up with all kinds of fun things. Counting down the days! … And trying to finish all the work that needs to be done before then. Oh dear.

Is it important to you to have a miniature that actually looks like your character in role-playing games?

Yeah, a while back we all backed the Hero Forge Kickstarter, and have slowly been using our vouchers from it to replace old customised 3d-printed minis whenever we get new gear! We’re addicted to making new things… it’s only painting them every time that becomes a chore.

I have never had a miniature in a role-playing game, and I don’t think it’s a great idea precisely for the reason outlined in the comic — it limits the imagination, when imagination is exactly what RPGs are all about.

Admittedly I haven’t played many RPGs, and those that I have played were mostly more narrative-based ones that have no need for any physical representation of characters.

The only exception: When I was in high school we played “Das Schwarze Auge” or The Dark Eye, a popular German RPG with some similarities to D&D. In larger fights, it sometimes became necessary to have a physical representation, but we always just used simple wooden disks on a grid for flexibility and played the rest out in our heads and aloud.
I had a bad-ass sabre-wielding fighter in that game. She was great, except she couldn’t do many things apart from fighting well, which made me as a player way more blood-thirsty than I’d normally be.

I heard about Das Schwarze Auge before, a friend of ours played that too in his youth! But I fully agree that miniatures are not really necessary and character representations are mostly handy in battle situations on a grid. But unlike ten years ago, there are some really amazing looking miniatures on the market nowadays that can be alluring. 🙂

Ah, Das Schwarze Auge, or “Het Oog Des Meesters” as it was translated into Dutch… My very first role-playing game, and I loved it to bits!
I’ve started playing D&D again about a year ago, and it brings a lot of different people to the table, expecting different things. Some enjoy the role-playing aspect, getting into character, interacting with the adventure that revolves around them. Others really like the battles that take place with the miniatures we use, carefully tracing the steps they’ll take in their mind and calculating the best way of taking out their opponents. And some are a mix of both.
And some, like me, like a bit of both. It feels great pointing the outstretched arm of my Monk at an Orc, then taking on that pose myself and make a beckoning gesture with my hand…

If I had a miniature of a character printed, I’d make them their ideal selves (awesome clothing/armor, cool pose) and without any weapons. They’re sufficiently identifiable with paint and design, don’t want to throw in something that varies too often.

This scenario is what starts the slippery slope that is modding your mini. Break out the jeweler’s saw and pin vise!

We use the collection of mini’s we have, and just pick the one who resembles the character closest. Differentiating on the battle grid is most important and it’s a lot better looking than coloured glass beads.

Since the figures don’t really represent our characters, they are just fancier glass pebbles. Just like the Munchkin figures we use for random enemies.

I literally got my mind stuck on this while participating in a dnd group some time ago. XD
Since a character can suddenly die in a battle, I decided it was not worth the hours of modeling and usually hopped around with a plain-ass pawn or a best fit miniature. Choices, choices!

Just got back from a long campaign of kingdom Death Monster. My friend, in true masochistic fashion, magnetized each piece of his mini’s, allowing for full customization from armor, hair, weapons, and posing. So for us it becomes part of the reward to grab new gear and update the mini, but I don’t know if I could go that far with my own mini’s O__O

I rarely have a miniature that matches my character in all of the RPGs that I have played between D&D 3.0 (Living Greyhawk), through D&D 4, and into Pathfinder Society and Starfinder. However, I am very pleased when I do find a miniature that fits with a character that I am playing. My LG bard and my current PFS ratfolk alchemist are ones where I found a mini that I felt that was perfect for them. And I still like my using a Necromunda miniature for a gunslinger in PFS since there were no miniatures available for that class at that time.

There was a Kickstarter a while back where all the miniatures had magnetic removable parts, like hands, just for such occasions as these 🙂

Very important – when it comes to defining your characters in the minds of other players, descriptions are a start, pictures are better, but a half-decent mini is best. Loved the old Anima Tactics mini’s for larger-than-life heroes.

Sometimes the hero even changes to fit the mini – had a couple of players make adjustments after seeing a figure they really liked.