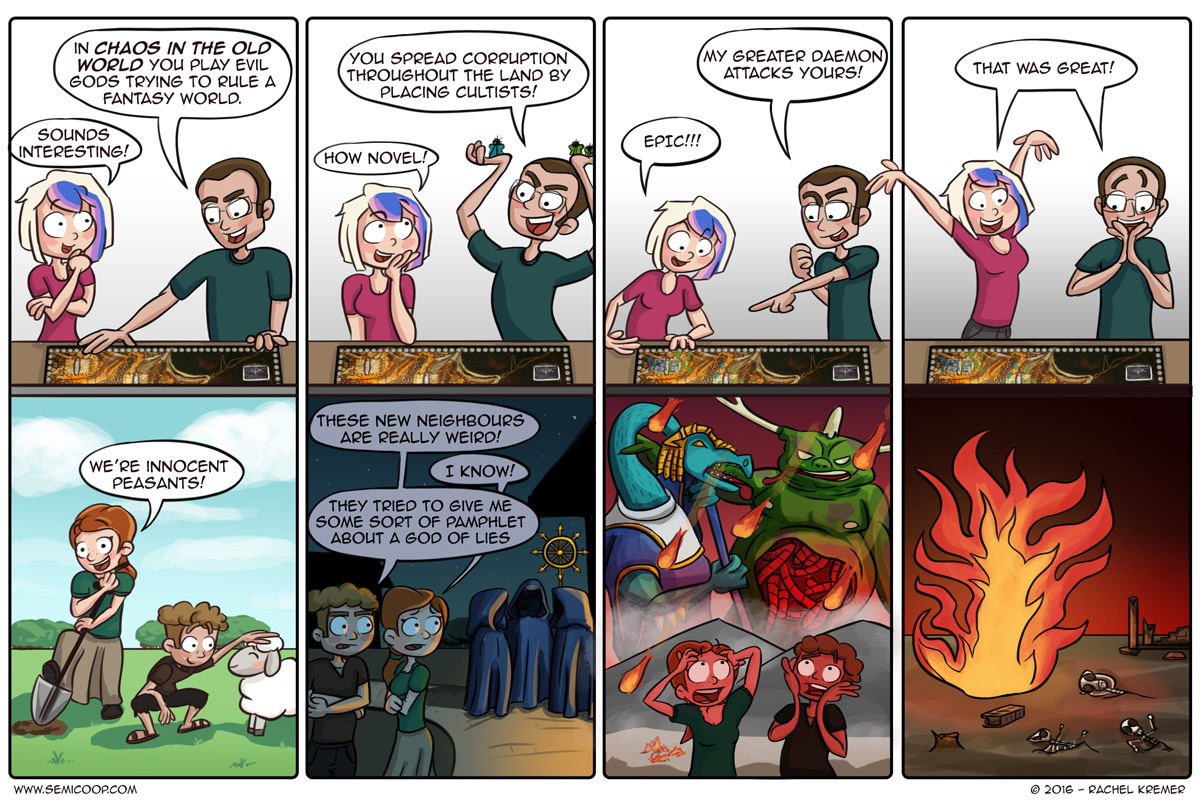 So we finally played Chaos in the Old World! One of our friends had been raving about it and tried to get it on the table for months, but somehow it never happened. So we finally sat down to play this dark and gritty board game. The theme belongs to probably one of the darker games we’ve played so far. I first thought that the map on the board was made of leather. I was quickly corrected – it turns out that it’s supposed to be human skin. Geez! This comic takes a closer look at what players are actually doing to the Old World (and its inhabitants). 😉

If you look through this thick greasy layer of evil darkness you’ll be suprised to find a really good and fun game to play. I was amazed at how easy it was to learn and how elegant the game mechanics were. And… it even though it’s a real Fantasy Flight Games game: it didn’t take us 6 hours! We’ll definitely play this again.

What is the darkest themed game you own or played?

For some reason, it was pretty hard for me to learn the mechanics, but it is a really good game, indeed. With the absolutely most disgusting designed/colored board I have ever seen (quite intentionally, I suppose). 🙂 BTW keep up the good work, I am always looking forward to reading your comics. 🙂

if you always imagine everything that happens with the poor little meaples than there are some games that you defently don’t want to play.
tossing them in a volcano, using monsters to trample on them, offer them to the gods, flik disks at them, etc.

I have a prototype for a game about surviving the death March from Auschwitz. It’s a card driven game where all the cards are awful things. I’m using historical photographs whenever possible.

What is the darkest themed game you own or played?

Nucleair War. A simple card game with a twister dial for random effects.
You had to kill civillians in the enemy nation(s) by the 10-millions at a time.

Great Comic. Just read through them all and you got yourself a new fan.

My darkest game is a tie between The Bloody Inn, where you murder your guests for the change in their pockets, and the deck-builder Arctic Scavengers, where you often end up sending useless survivors into the tundra to die – unless you have a special leader like the cannibal; then you can find… better… uses for them 😛

Some would consider the Warhammer fantasy world to be a tad brighter than its futuristic “sister” world in Warhammer40K. That said, whenever I put on my Chaos gods hat I loose all pity and remorse for the peoples of the Old World. Spread the disease! Spread the corruption! Blood for the Blood god! The only downside I think to Chaos in the Old World is that many consider it a “perfect-4” game, that it only “completely works” if you have the full roster of gods participating. While I haven’t played with less than 4 players, I understand why this would be the case.

As for the darkest themed game I’ve played, this would probably be it, although it will soon be replaced by This War of Mine The Boardgame when it comes out.

In Viral your doing your best to infect all the organs of a patient with your mutated virus, which is a pretty grim theme, but the artwork in the game is so cutesy that it’s not a problem.

Darkest game I’ve ever played would probably have to be Monopoly, because what could be worse than having your dreams of financial success crushed under the unyielding heel of big business?

Chaos in the Old World

In this game, players take on the role of the four evil gods from the Warhammer realms. The Blood God, the Plaguelord, the Changer of Ways and the Prince of Pleasure and Pain. Your goal is to enslave the Old World, spread your corruption and battle each other to find out who will really rule this Old World. Support us through affiliate links or visit your local game store! Amazon.com Bol.com (Dutch)