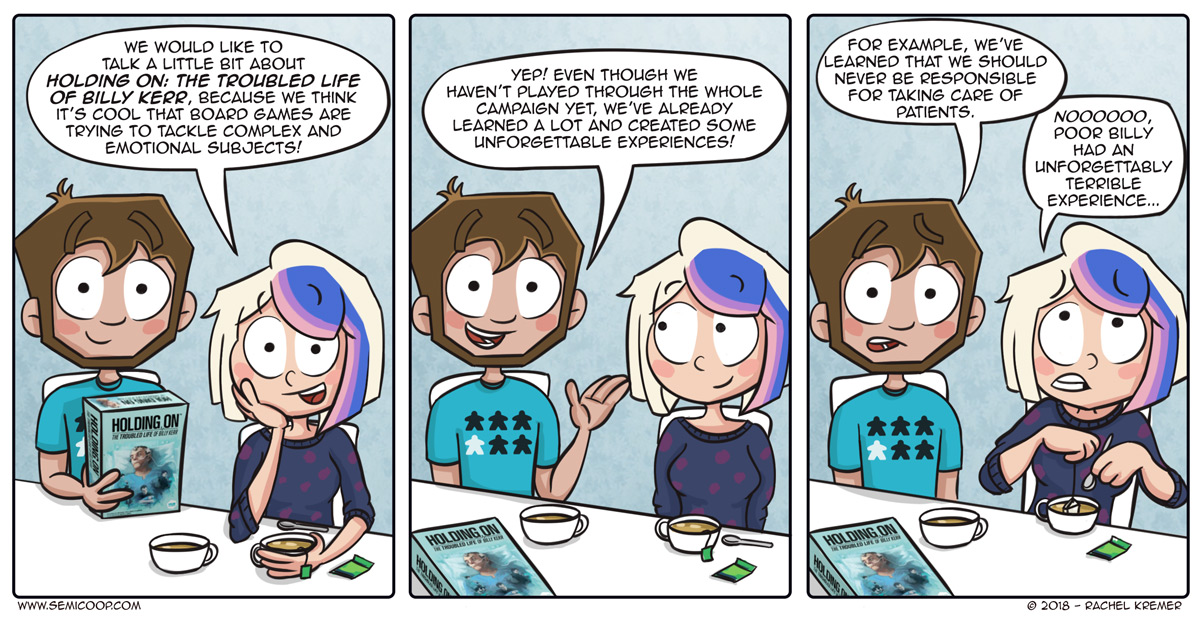 We demoed Holding On by HubGames on the UK Games Expo this year and we were impressed and really liked it. We bought a copy at Spiel and it’s now waiting on our shelf to be played and we’re looking forward to discovering more about the life of Billy Kerr! We’re enthusiastic about games trying different things and also engage original topics, like in Holding On. In this game, players play co-operatively as a nursing staff tending to Billy Kerr, a terminal ill patient. During the campaign, you have to find a balance between taking care of Billy and trying to gain his trust to learn more about his troubled life.

Since last week, we also publish two extra comics on our social media which are sponsored by CoolStuffInc! You can either subscribe to the CoolStuffInc newsletter to read them first or follow us on either Instagram, Facebook, or Twitter. If newsletters or social media is not your thing and you would like to read them, here they are:

Last week we managed to stripe off some new games from our “to-play”-list! We’ve played The Rajas of the Ganges, Heinze played Crisis and The Cousin’s War with a friend while I was away (so it’s not really off the list, because I want to play those games as well) and we played Spoils of War! And also Century Golem and Root, but those weren’t on the list. 😉

It’s almost December and that also means it’s time for the BoardGameGeek Secret Santa! We already received our first message from our Secret Santa and now that we know who our target is, we have to think up a game plan. Exciting stuff!

Do you know any other games with such serious themes?

This War of Mine or The Grizzled. I suspect that there are others as well, but those are the two that leap to mind off hand. Weighty and mature topics, aside from explorations of geopolitics and the way nation-states/cultures interact and conflict with each other, have usually tended to be less the domain of board games and more the domain of other forms of interactive media, such as tabletop role-playing games or computer games, but that shouldn’t stop developers from being willing to try more games of this nature.

This War of Mine and The Grizzled are very good examples! I totally forgot about those two.

Well from my collection I would say Archipelago (the theme of hideous colonialists exploiting the archipelago inhabitants comes out strongly, always happy when the game ends with a rebellion) and Cuba Libre (a COIN series game = serious by nature) Also, this week we got our copy of Healthy Heart Hospital, which is a very cool co-op about managing a hospital, trying to save patients and all that stuff – and, being actual doctors, me and my partner found it really thematic :S

Holding On: The Troubled Life of Billy Kerr

In this co-operative game, players work together to take care of the terminally ill Billy Kerr. In ten scenarios, you will need to piece together a lifetime of memories of his troubled past while taking care of him. --- Support us through affiliate links or visit and support your local game store: Amazon.com