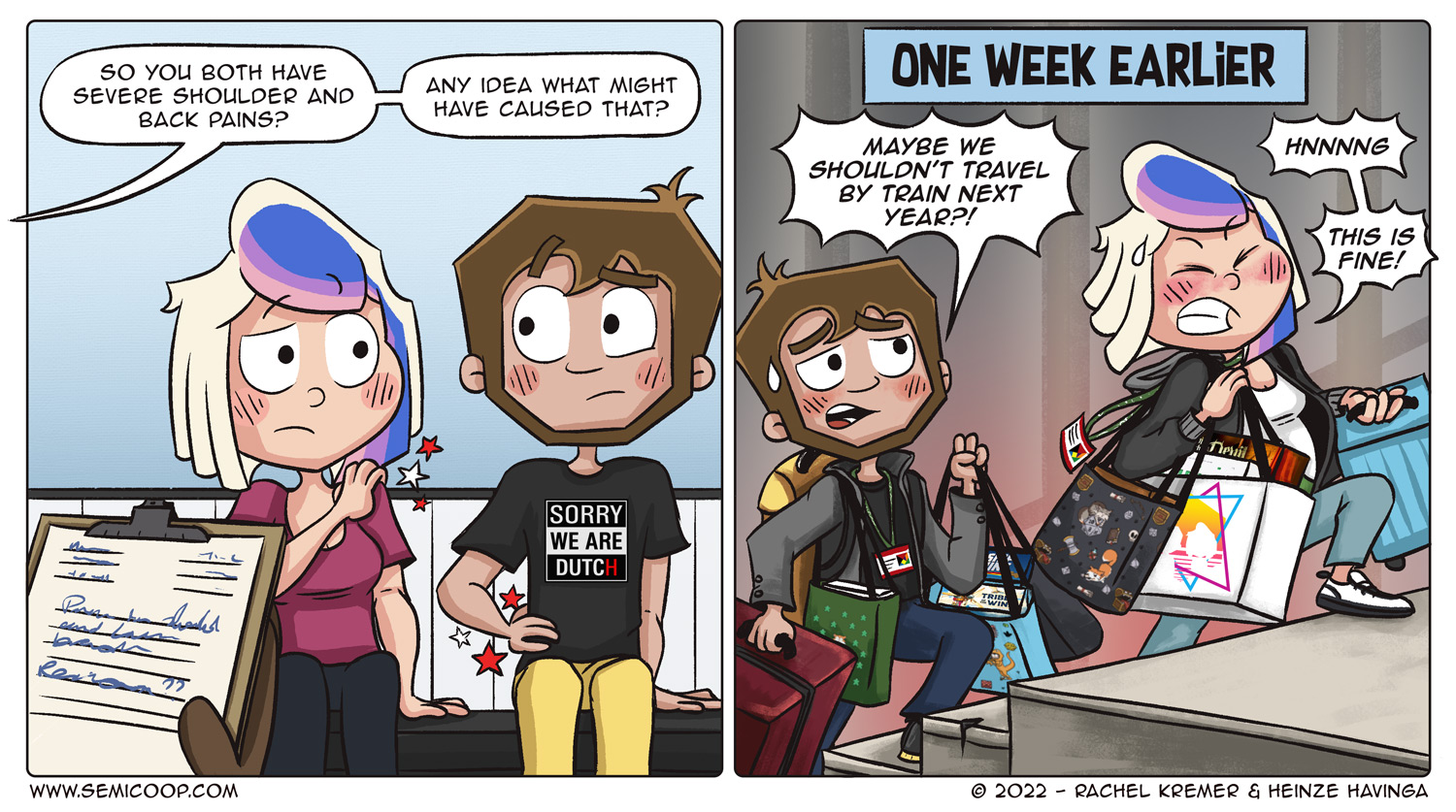 On the last day of Spiel, we encountered no less than three broken escalators while hauling bags full of games trying to catch the train. In the end, we missed the train by a few seconds which meant we had to wait an hour for the next train. We felt pretty tired and sore while waiting for that train and the idea for this comic was born. Every year we discuss if we should start shipping some of our games thome, or at least have some friends who are at Spiel take home some games but every year we think it will be fine and try traveling by train while carrying too many bags filled with games… 😅

Speaking of being sore, we’re both recovering from Covid so last week has been a bit of a slow one. When we started seeing some friends on Twitter testing positive we started to assume we were going to get it, and halfway through the week, we could confirm our con cruddy feelings were coming from Covid. We’re both on the mend and doing a lot better but our energy levels are really low and full recovery will probably take some time, which is a shame as we have some games we really want to try with friends.

Luckily we did manage to play four games from our Spiel Haul, so let’s give a short first impression of them all. For disclosure, all these games were given to us by their respective publishers:

First up is Aleph Null, it’s a one-player deck deconstruction game about summoning Baphomet. You’ll need to remove all your cards from your hand, deck, and discard pile before the end of the game to win, while also avoiding assassins, not burning yourself with an excess of magical energy and make some tough sacrifices to win the game. I enjoy how quick it is, how flavorful some of the cards are and the fact this is the first game we’ve come across, that lists is soundtrack composer on the box and even has some sheet music of the soundtrack in the rulebook!

The second game we played is Verdant, which is definitely a Flatout Games game. If you’ve played Calico or Cascadia you feel right at home with wonderful Beth Sobel art and a fiendish tile-laying puzzle that has several scoring methods that seem to work against each other. We did think the end scoring is so complex and the board is so visually cluttered at the end that we had some trouble making sure our scores were right but that might be our foggy Covid brains. So we’ll update our thoughts on it once we’re fully up and running again. Our first impression is that this one is trickier than Cascadia and feels a bit restrictive like Calico. If you like grid-building puzzles like Village Green or Village Rails you’ll probably like this one as well.

The third game we played was Akropolis which was a pleasant surprise, while we heard other people be positive about this one we didn’t expect a lot from this light city builder but after our first game, we really enjoyed how easy the rules were while offering interesting choices every turn. You build a city and score points for different types of districts and you can multiply those scores by placing plazas of matching color. It’s a bit reminiscent of King Domino but definitely a step up in complexity. We really enjoyed that the game allows you to stack tiles to gain stones, which can be used to buy tiles, but stacking also improves the score for that particular tile. We want to explore the stacking mechanism a bit more as we suspect you can get pretty hefty scores when using this option in the right way.

We also played Turing Machine, which feels like the designers Fabien and Yoann wanted to show the world how smart board games without an app can be if you just make a fully cardboard-based computer. While the game itself is pretty much the deduction classic Mastermind, the questions you get to deduce the right answer are a lot more interesting than “is this the right number on the right place?” and more in the vein of “is the center number above, below or exactly 4?”. This makes it all a lot more interesting and we kinda want to reverse-engineer the whole game to see how they did it. We’ll have to wait and see if the game holds up as a game over a lot of plays but as a design, it is an ingenious object well worth admiration and study.

With four games played for the first time, we still have about 17 games to go! We’d best get back to the gaming table as soon as we’re both feeling up to it!

Do you suffer from any board game injuries?