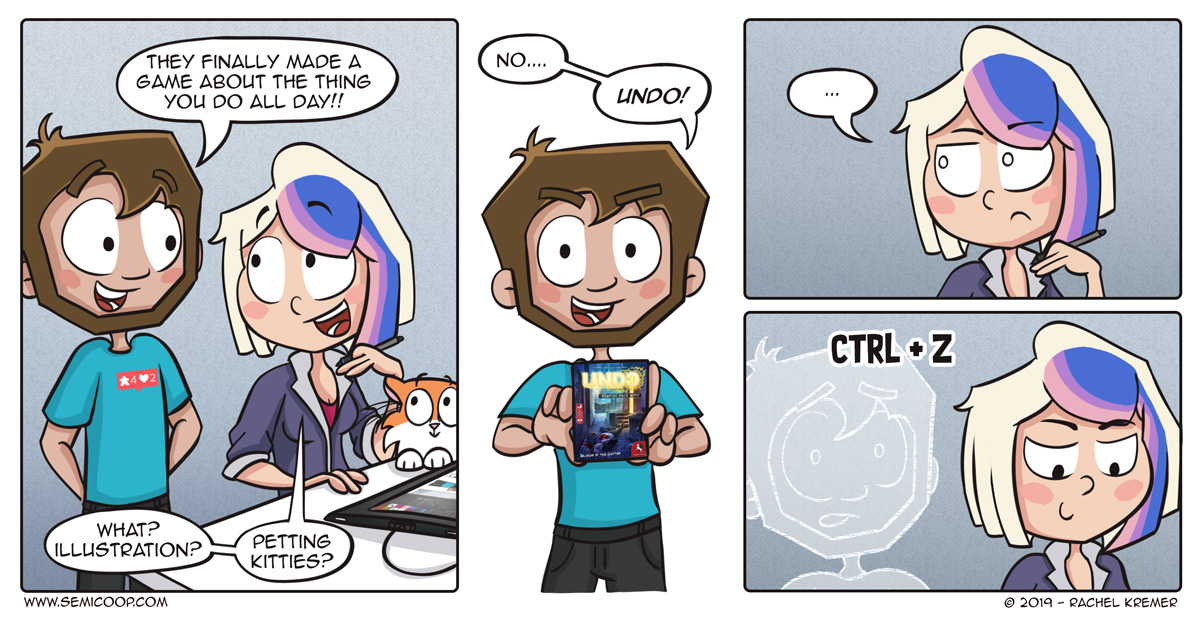 Heinze should know better than to get on an artist’s bad side. 😉 But it’s true, the undo-command is certainly something I use a lot!

Undo is a puzzle type game in which you try to change the past and prevent the death of an individual. We haven’t played it yet but the premise sounds intriguing and we love one-time puzzle games, especially when you don’t have to destroy components, because then you have a great experience to share with friends!

Let’s talk about what we played! We’ve continued our Gloomhaven campaign and we are now 26 games in. We’re starting to see some patterns how side stories are set up over multiple scenarios but it’s still a lot of fun. We doubt we’ll ever finish the whole campaign but so far it has been really cool and we’ve been playing it more than we expected at the start.

We also tried the first scenario of Undaunted Normandy, a deckbuilding WW2 war game by Osprey. The first scenario is a training scenario but has us interested in trying it more, the design does a whole lot of cool things with a minimal amount of rules. The game was also really quick, which is not something that we normally expect with wargames.

For this week, we’ve got some fun game days planned continuing our Charterstone campaign, playing some Aristea and probably some Wingspan. With our vacations coming up we’re also thinking about playing some bigger games that take all day, but those plans are still in an early phase and we don’t want to jinx it! 😉

Do you have some vacation time this summer? and which games do you want to play during your time off?

In Undo you try to prevent the death of a person by changing the past, your choices will have an impact on how the scenario will play out. By looping through time 2-6 players will try to figure out which events will ultimately lead to preventing a death.