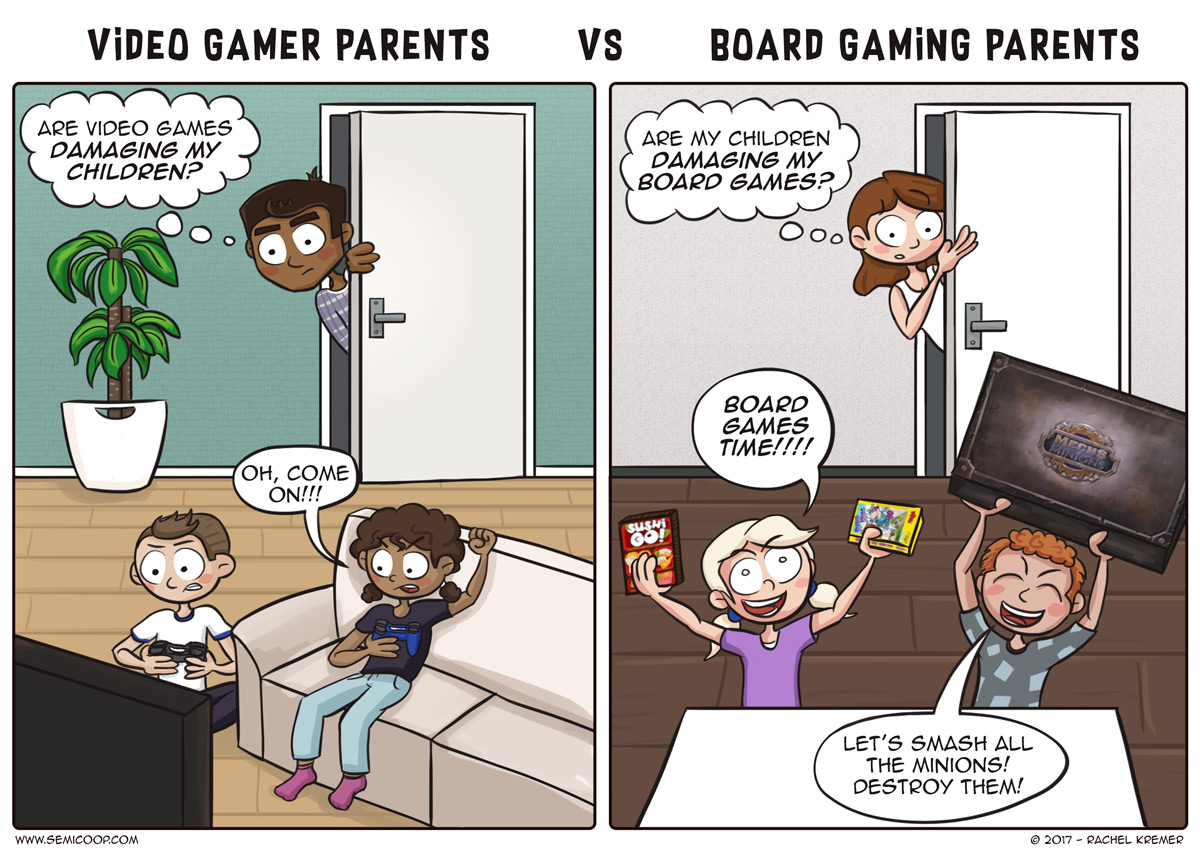 When we saw yet another debate about whether video games are destroying our fragile children, we immediately joked about how we would be more afraid that kids might damage our poor fragile board games. 😉

Before getting into board games I was more of a ‘digital’ gamer (and mobile game developer actually) and I’ve played a ton of games. I still play them, but I don’t have the time like I used to. Right now I’m playing  Stardew Valley and Mirror’s Edge: Catalyst and together with Heinze I’ve played quite some Helldivers, Overcooked, Rocket League and Star Wars Battlefront the past year. There was a point when I was developing games at day staring at a screen and didn’t really feel like playing games at night… staring at a screen. We made a slow switch to playing more board games and less digital games and that was a great thing. And now we’ve reached a nice balance between analog and digital entertainment, hurray!

Now we’re on the subjects of kids. We’ve gifted My First Stone Age to our nephew of six and we were amazed by the large wooden components, build quality and the smart game mechanics for children! Especially kudos for the memory part.

What are your favorite digital games?

Wow, that kid has to be on steroids to hold MvM box above his head.

I have started to play Black Desert Online lately, and I have found, that I really do not have that much time for board games, which is probably true for playing any MMO. Need to find some balance like you guys.

Regarding damage to the board games by a kids, my plan was to buy a kid games for every holiday for my cousins kids, so they grow fond of board games on their own, and learn to value board games.

But on the subject of children and our precious board games, I’ve found myself in the regrettable, unavoidable situation – more that once – of having my collection catch the interest of those destructive little hands. Here is what I’ve learned:

-Dexterity games are the BEST! … Ice Cool, Cube Quest, Click Clack Lumberjack for starters
-Hide all paper, cards, and components smaller than a die … they will disappear and/or be destroyed
-With what is left – usually just the board and significant player pieces – make it an exercise in creativity and invention. “Imagination is more important than knowledge,” as the Einstein quotes declares, but in this instance I suppose you’d substitute “the rules” for “knowledge.”

Once, I found myself hosting friends and one of their children would not let her fascination go after seeing the box to my copy of Adventurers: Pyramid of Horus … no matter how hard I tried to distract her. So, I cleared a low table, setting the box out up high and out of sight, and brought down the board to her level. Upon seeing her eyes go wide at the sight of this massive pyramid board, I asked, “What’s this place??”

(Dang, kid, you didn’t even have to think about it!)

Then I laid out the different adventurer minis you could play as: “Alright, which one are you??”

“This one!” picking the big dude with the machetes.

“And what about these guys?” I asked as I lay out the mummy miniatures.

“Oh, well, these two want to steal his hat. They’re mean. But it’s his, ’cause he won it but they’re jealous ’cause they never won anything. We’ve gotta help him.”

And so on … before long, we were strategically placing the pyramid blocks to protect our trophy-hat mummy friend from his sinister conspiring counterparts, striking them down only when necessary. In fact, the first time one got too close, she told me to punch a hole in the ceiling so she could reflect the light from outside off of her machetes to blind it … because swords don’t work on mummies, obviously. 🙂

I’ll probably have some explaining to do if she revisits the game later in life, but I saw our experience as a win. With just the board and some plastic, we were able to seize the spirit of what I love most about board games: creativity and collaboration.

If you mean board game ports, that’s easy: Sentinels of the Multiverse. It takes all the hard work out of managing all the different effects that can alter how much damage you do/take, and solves the quandary of trying to find a way to store all the expansions.