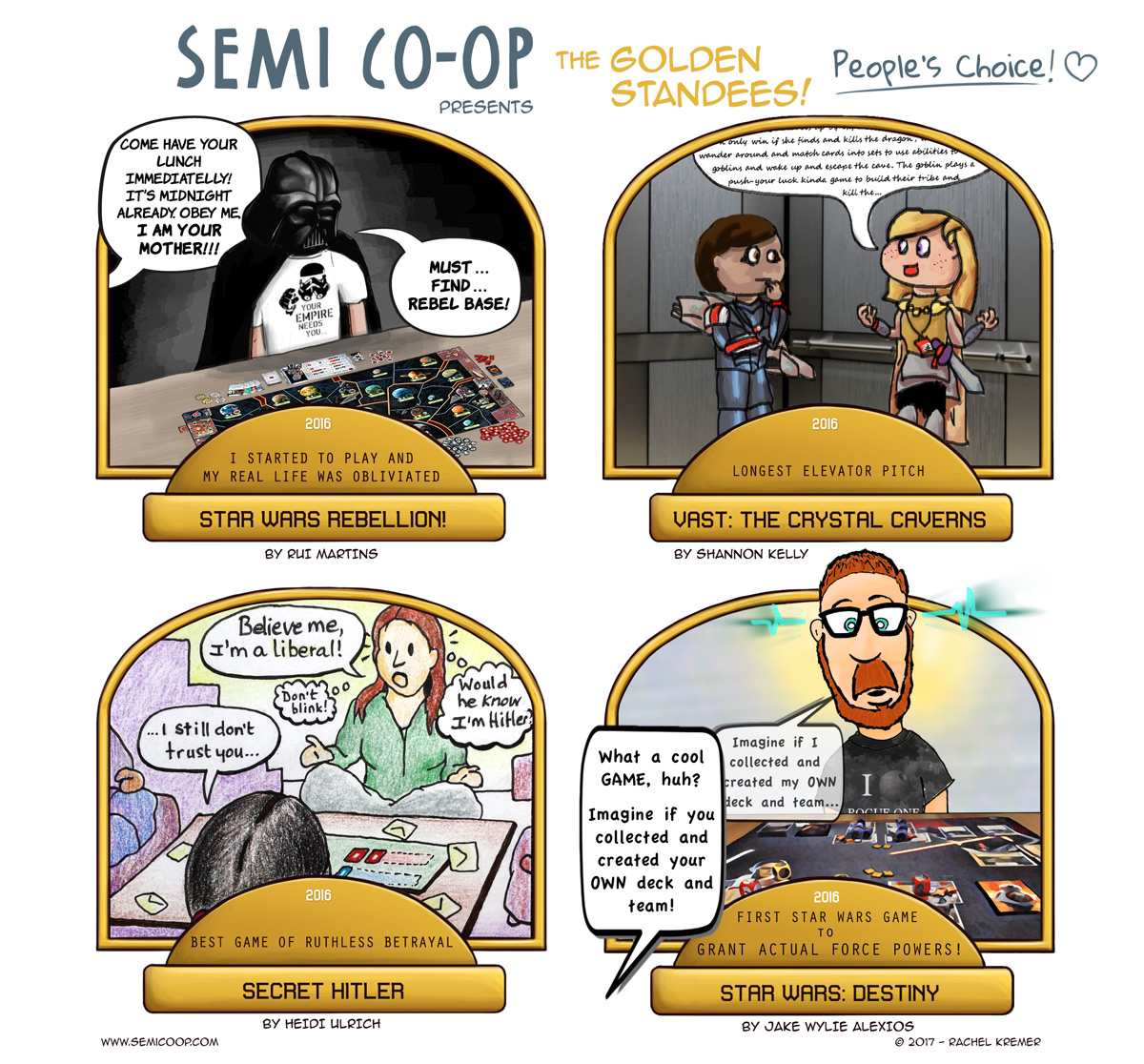 This week’s comic consists of the creative work of some of our readers! Four guest comics in one, how cool is that?! 😀 A big Thank You to Rui, Shannon, Heidi and Jake for your creativity and these great Golden Standees! This is definitely something we’d like to to again next year, it’s great to share the stage with readers for a change.

Both of us haven’t played Star Wars: Rebellion or Star Wars: Destiny, yet. Star Wars games are very popular and it’s amazing how many there are -and- how good they are. In BoardGameGeek‘s overall board games ranking there are three Star Wars games in the top 50, three!
Vast: The Crystal Cavern is a dungeon crawling game… only quite different! One player plays the Knight, a second player the Goblins, a third player plays the Dragon and the final player will take on the role of the Cave itself. Now that’s surely something I haven’t seen before and can be hard to explain to other people.
Secret Hitler, it was played intensely on our Eightstravaganza game day and everybody had great fun. A great social deduction game in which people are bound to behave a little akward and out of character.

So now we’ve really finished wrapping up 2016 with the People’s Choice awards, it’s time for 2017! Next week we’ll continue with our ‘regular’ comics and we’re working on some really cool new stuff for you to enjoy this coming year.

About what game should we definitely make a comic this year?

They ARE the longest elevator rides in the galaxy.

Just played rebellion and destiny. Rebellion will consume your life (our game took 3-4 hours) but it truly lives up to its claim of being the original trilogy the board game. Highly recommend. If you want to play test destiny grab two of each starter box (Rey and Kylo) and then play a match, which should last 30 min tops. Then if you feel like grabbing more go ahead

I’ve been having so much fun building decks/teams for Star Wars: Destiny!
Here’s a great website that makes it easy: http://swdestinydb.com/

Two of my most recent decks of which I’m particularly proud:
-Kylo Ren & Darth Vader and lots of Force powers … I named it “Grand-Daddy Issues”
-Han Solo & Poe Dameron and lots of vehicles and bases … I call that one “Ace of Base” 😀

Your comic and award have filled me with delight. Too be fair to me I have successfully sold the game on an elevator ride at Gencon.

Is that a Knight cosplayer talking to Sheppard? We have been planning a Knight costume for my daughter for the conventions we do together in the summer.