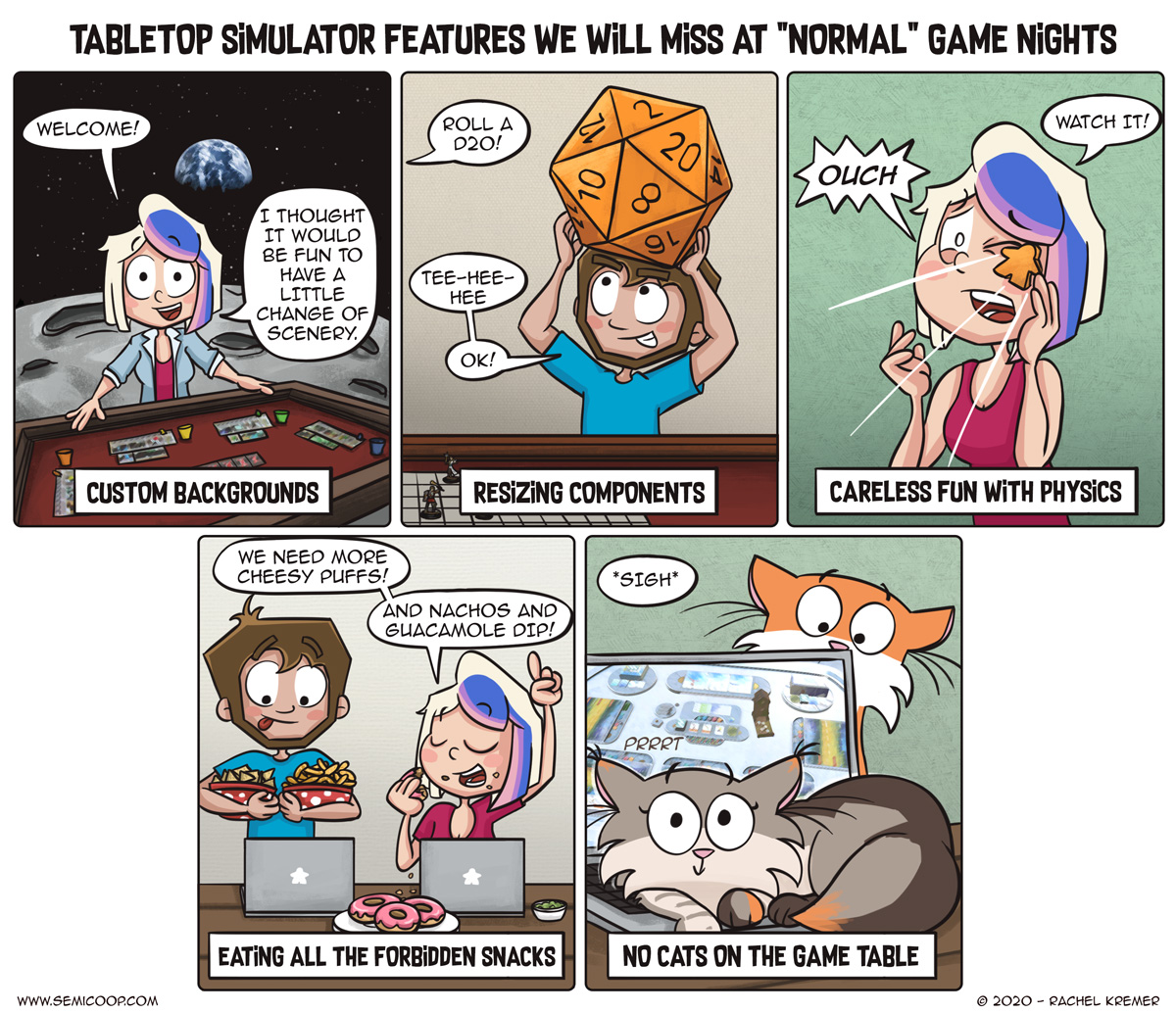 We hope everybody is doing well, we are both still healthy and we’re starting to have a little more free time for some games. Which really helps to fill out the blog ;-). This week’s comic is based on our experiences playing our first board games on Tabletop Simulator and Tabletopia. Both “games” are a virtual tabletop, which means they allow you to play boardgames but do this in a way that simulates an actual table. Often there is no strict enforcement of rules or things like a victory screen like with app versions of a board game but you manipulate digital components like cards and dice like you would when you play a game at an actual table. We don’t think it will ever fully replace gaming in “meat-space” but we did encounter some aspects of a virtual tabletop that we’ll miss once we start playing around actual tables with our friends again.

While we both had followed the starting tutorial for Tabletop Simulator and had a short looking at Tabletopia, Formula D with five friends was the first time we actually sat down and played a virtual game this way. We had a surprisingly good time, it didn’t feel like it took a lot longer than a normal game of Formula D and everybody picked up the interface pretty quickly. We’re curious to see if this holds up once you play more complicated games but we’ve seen people on Twitter actually saying how quick Gloomhaven plays in Tabletop Simulator so who knows. We also played some Santorini on Tabletopia using the iPad which worked well, originally we wanted to play Dice Throne but couldn’t figure out how to select multiple dice, and the Tabletopia manual is geared towards playing on PC which was a bit of a letdown.

Next to these digital games we also had some good experiences playing analog games! We played Flashpoint over Skype which worked nicely. Both sides of the call had their own board which helped to make sure we all could see the same game state. We also played Plunderbund, a game about running an illegal business selling to different vendors across a fantasy city set in the 1920s. The game was actually a lot quicker with two than we expected so it will probably hit the table again soon because it’s a game we really loved when we tried it at Essen but our previous experiences have always been with four or five players which makes the games not so suitable to play during the week.

The main event for us however was Forgotten Waters, we really like the games Plaid Hat puts out and now that they’ve left Asmodee and are an indie company again, we were really curious about this new release. Forgotten Waters a coop game where you as a group form a pirate crew and have adventures while playing through five different app-supported scenarios. We have complete the first scenario which was fun and filled with great mini-stories but also felt like a tutorial/story introduction into the actual game. After seeing how the Mansions of Madness scenarios feels really different we’re hoping Plaid Hat has been able to pull off a similar feat. The game plays like a coop version of Tales of Arabian nights or the story parts of Near and Far, so it’s great if your group wants to have a thematic experience without having to min/max every little detail to be able to win.

This week we have another Tabletop Simulator session planned and we’re hoping we have the time to try out the DLC case for Chronicles of Crime that Lucky Duck has put up, the last one had quite the twist but we managed to get a perfect score in the end, so hopefully we’ll do just as well this time!

Do you have suggestions of game to play on Tabletop Simulator?

Forgotten Waters is the game that makes me ask if I’m strong enough to wait for Sleeping Gods.

Haha, we didn’t back Sleeping Gods but we can see how it tempts you to get Forgotten Water while you wait. 🙂

Have Forgotten Waters on my table here and hoping to seduce my wife into playing 2-player per the variant rules. Is that how you played? Did it work for you? Any tips?

Yes that is how we played it and it went well! Keep the variant rules nearby as there are quite a few of them but other than that it should work smoothly!

Have you tried Board game arena? The physics aspect of tabletop simulator don’t agree with me unfortunately.

Been playing on TTS for years, and I can wholeheartedly recommend the Gloomhaven Fantasy mod, the Carcassonne scripted mod, and the Arkham Horror LCG Super Complete mod. All 3 have a lot of work put by their creators to make them amazing. Betrayal at House on the Hill and Red Dragon Inn also have high quality adaptations, and are great if you gather a large group of friends.

In general, any game with large amounts of setup/teardown plays great on TTS.

I almost got TTS last Friday, but Steam had a bunch of games on sale, and I cracked. It’s a shame, because it looks great. 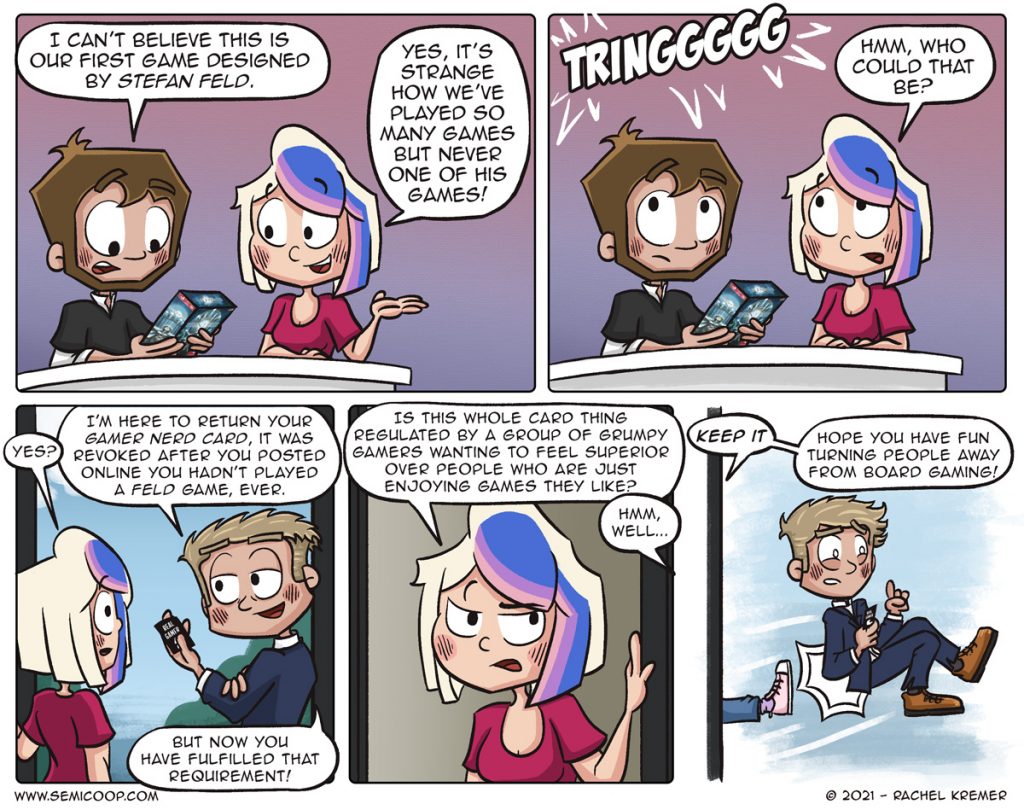