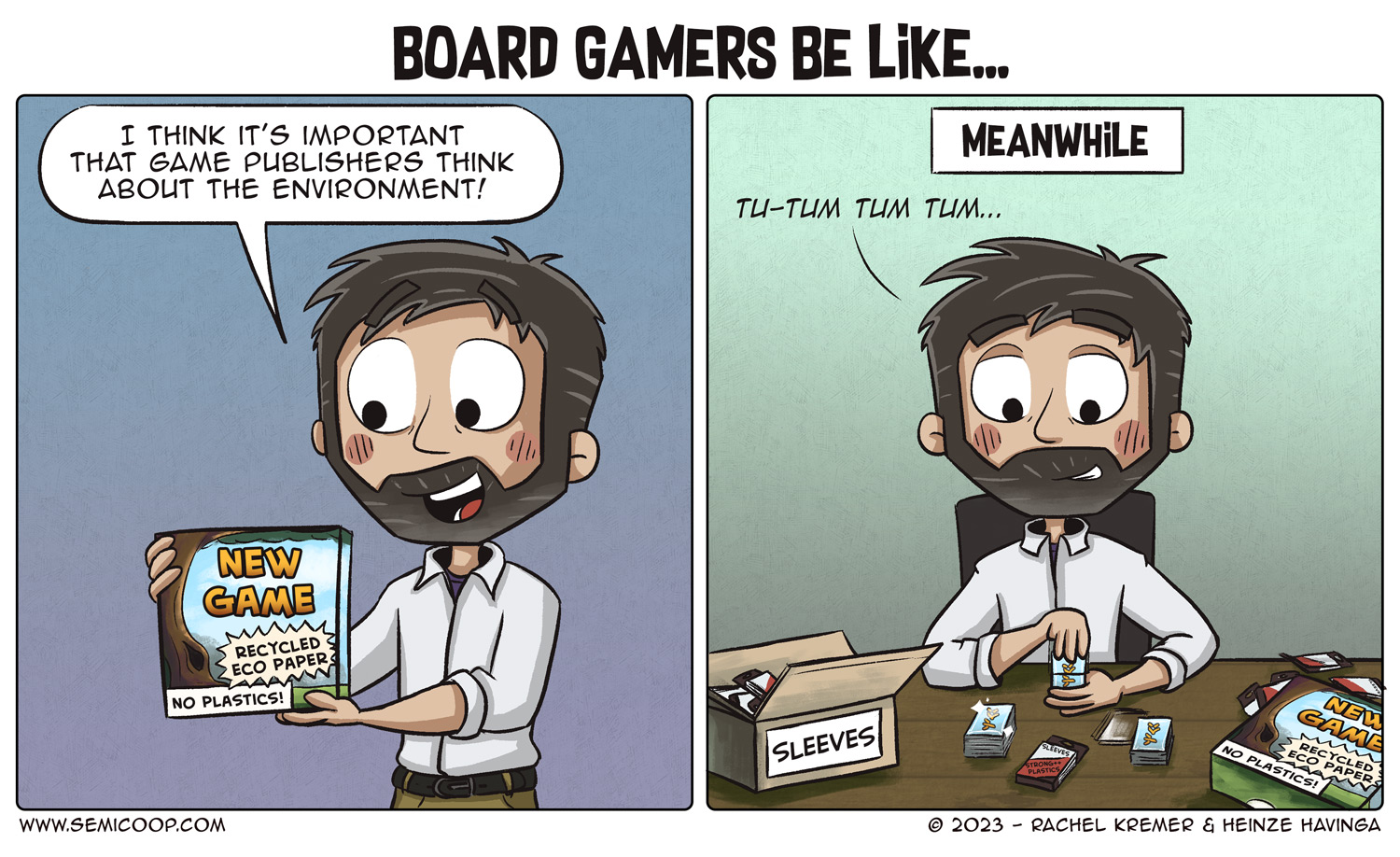 Sleeves are essential when playing card games like Netrunner and Magic, but you only sleeve the cards that are in your deck(s) and not all the cards that you own. We used to think that sleeving cards was a good thing and important for maintaining the perfect condition of games. But we’ve changed our opinion on sleeving over the years. Even with games in which cards get shuffled often, we don’t sleeve them anymore. Card quality has improved greatly over the years and, honestly, we don’t mind if a game shows a little bit of wear and tear. If you often sell games after playing them a few times, we do understand that the pristine condition is an important factor though.

We enjoy that more and more publishers are slowly trying to reduce plastics in their productions. Something that you see more and more regularly is just a simple paper band around a pack of cards instead of plastic wrap. Personally, we think that’s great and we’ve never seen damaged cards despite having less ‘protection’ in new games. We’ve also seen an increase in cardboard inserts instead of plastic ones lately. An example of this are Deepprint Games’ titles like Skymines and Savannah/Caldera Park.

Plastics won’t be banned, that’s not possible. But small things like reducing (unnecessary) plastics in game boxes surely are nice. Maybe not add 20 ziplock bags to a game box if you’ll only use 5? Plastic wrapping around game boxes is a more difficult thing. We don’t mind if a game box has a little scratch or dent, but we know from retailers that a lot of customers do and will return games over tiny damages. We hope that public opinion about perfect a box should look that might change over the years…

We’ve had another relaxing week without work and that’s really good for our playing stats. 😉 The constant rains aren’t really a motivation to go outside, so we’ve played quite some games! We started the year off by playing Turing Machine and Unicorn Fever with a friend! Later that week, we got ourselves a copy of Terraforming Mars: Ares Expedition at our FLGS. We played Terraforming Mars once and agreed it’s a good game, but takes a little too long. So when we saw that this only took one hour: Yes, please! That playing time turned out to be untrue for us though, you can read our first impressions on our Instagram.

We also played our first game of Oath! Heinze really really loved it while I found it a little confusing. We’re going to play the introductory game again next time and see how that goes – I’m sure that’ll be a totally different experience. I’m sure we’ll share our first impressions on our Instagram soon, but I’m not going to write about it in length here right now. 🙂

And we played Splendor Duel and we’re honestly impressed by this game. It’s a solid two-player game and we really like it better than the “big” Splendor.

We’ll see what this week will have in store for us. A mysterious package just arrived and we haven’t looked at what’s in it yet but it’s definitely a board game!

Do you sleeve cards?

I’ve sleeved Pax Pamir 2nd., Oath and John Company 2nd. So basically almost every Cole Wehrle game that I own. Root and all my other games are unsleeved.

sushi go bc loads of shuffling but few enough cards that it wasnt egregious (unlike dominion), and the loyalty cards for unfathomable

I used to sleeve a lot more, but the decks have gotten bigger in some games I own and don’t stand in a pile with the slippery sleeves. Now I mostly just color code some cards with sleeves – player aid, etc – to make setup and sorting easier. If the cards are thin quality or my deck builders with lots of shuffling, I tend to sleeve.

I don’t view card sleeves the same as single use packaging when it comes to plastic. Eventually my sleeves will probably end up in a landfill, but I don’t have plans to toss them like I do with packaging.

It’s not one time use plastic like most bags, wraps or straws.

I went through a phase of sleeving a lot of games before deciding that it wasn’t generally worth it. The only game I’ve sleeved recently is Terraforming Mars due to the fact that the card quality there isn’t great and there’s some inconsistency in card sizes between expansions.

About the only thing I sleeve is my Magic: the Gathering, Arkham Horror LCG and L5R decks. Boardgames don’t get sleeves. Mostly because the games I would want to sleeve (Dominion and Shadowrun: Crossfire), I have all the expansions for and it would be…

Holy Crow, would it be especially prohibitive for Dominion, given the sheer number of cards, as I have the first edition stuff and got the Second Edition Update Packs. The only card I do not use in my randomizer is the Saboteur. Because he knows what he does, the degenerate garbage.

Plastic card sleeves can ensure the longevity of games, especially ones you’ll play a lot with or those with poor card quality. Like others here, plastic card sleeves have a reusable purpose in mind, so it’s hardly anything that most reasonable environmentalists would find troubling or wasteful. Though I’d like to see more card sleeving companies find ways to use recycled plastic or bioplastics for their card sleeves. Not every game needs card sleeves as well.

As the post mentions, minimizing disposable plastic and other unnecessary plastic is far more important for the industry and gamers to consider. Plastic material should be reserved for special purposes and ideally be made from recycled over virgin plastic and/or bioplastics. 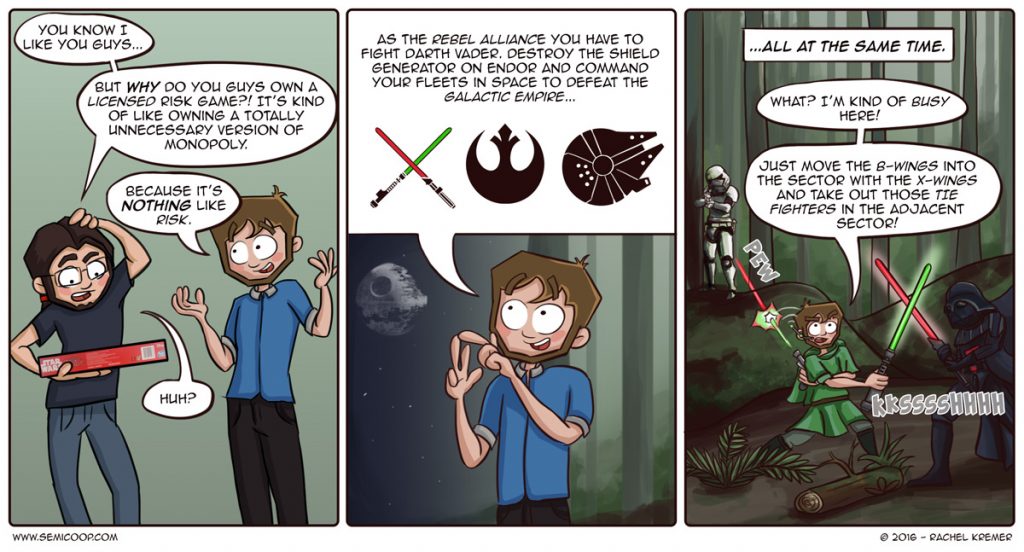