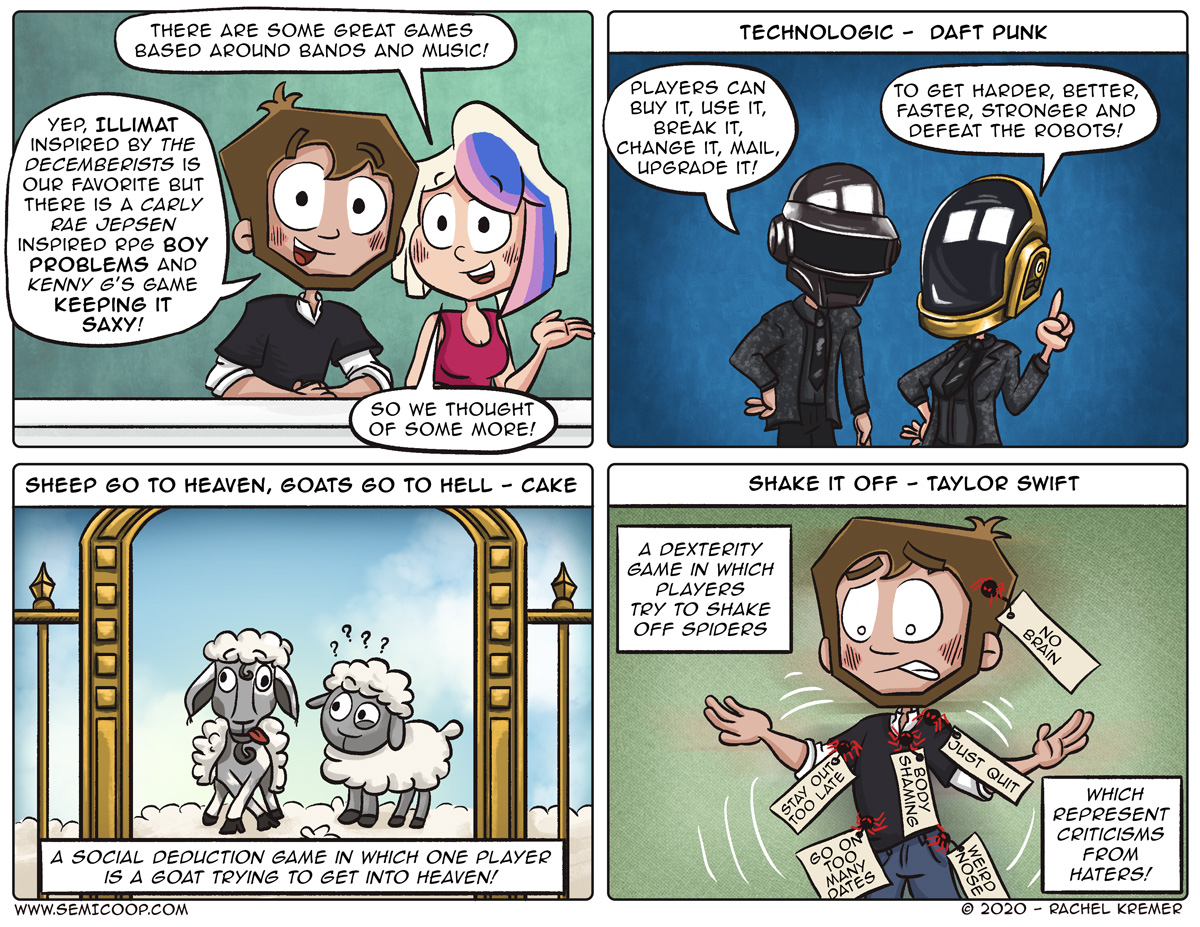 Between Christmas and New Year’s pretty much everybody in the Netherlands listens to the radio to hear the Top 2000, the Top 2000 is a list put together through public voting to see what the best 2000 songs of all time are. It’s the only time you’ll hear One Direction and Ramstein back-to-back on a radio station and it shows just how broad, different, and fun music is. This national tradition got us thinking about music and games, specifically games based on songs or bands.

As we said in the comic, Illimat is our all-time favorite. The game started as a prop for a photo shoot for the Decemberists and was, at their request, turned into a real game by Twogether Studios. It feels like a classic card game and it looks like you’re playing with something that you can find next to an Ouija board in a little occult shop. It has been confused as a satanic board game, but we can safely say that listening to the Decemberists, talking to the lovely Twogether Studios team, and/or playing Illimat won’t make you worship the devil.

To nobody’s surprise, this week we’ve played some games! Steeped Games sent us a gorgeous collectors edition of Chai which is a relaxing game about serving tea. We also tried the coop mode which was a little too random for our tastes but the normal competitive mode is a lovely experience similar to Splendor or Century Spice Road. We also played Dixit for the first time which might surprise a lot of people, we enjoyed it but we’re actually a little shocked that the famous Dixit cards didn’t seem as weird or beautiful after playing so much Mysterium and Muse which use similar cards, which can happen if you play the spiritual successors of a game before the original.

We also played Cubitos, which is a racing game in which you use dice to gain speed or trigger other useful abilities. It comes with a ton of different dice abilities and racing tracks and we can’t wait to see how they change up the game. The game has a very unique art style and sense of humor that we really enjoy but we have heard the other people don’t care for it. Lastly, we also played the second case of Pocket Detective which we thought was a lot stronger than the first, and even played the Pokemon Trading Card game which hasn’t actually changed that much from the first edition and is still an easy gateway trading card game about fighting each other using cute pokemon.

Next week will be the first week of 2021! We hope this year will be a little more optimistic than 2020 and that we’ll all be able to at least gather some friends and play games again.

Do you have a game idea based on a song or band?

Dixit has a ton of expansions and different styles of art.