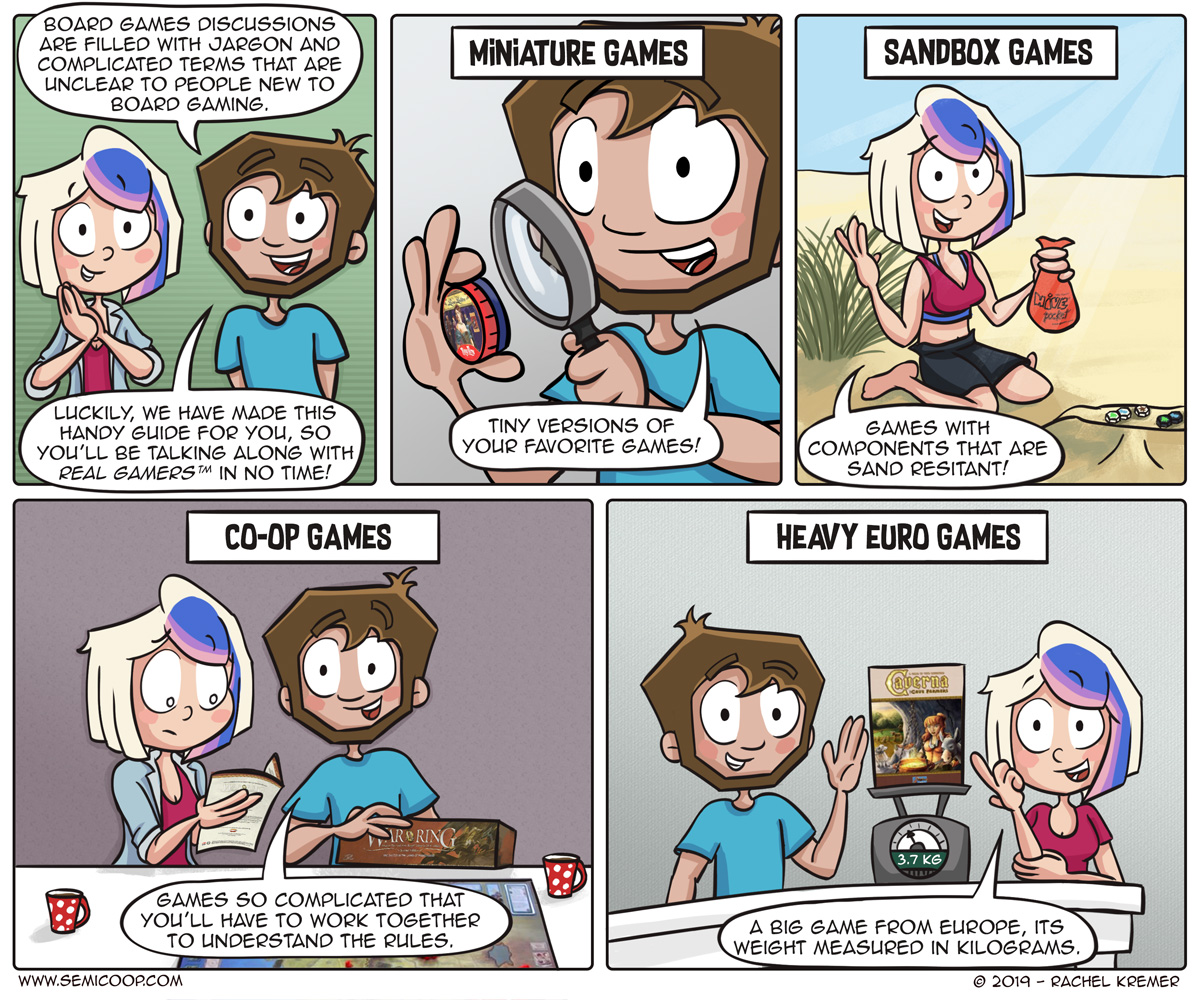 We thought, with all that gaming jargon being used nowadays, it would be handy that we would make a little guide to what some of it means. (Disclaimer if you’re not that deep into board games, we’re just goofing off.)

I think it’s great that there are so many different types of games available at the moment. And whether you like Monopoly, Munchkin, Catan, Exploding Kittens, Cthulhu Wars, Wingspan or whatever game, we’re all “real gamers”. And don’t ever feel discouraged or judged by people saying otherwise, the most important thing is that you’re having fun.

Speaking of gamers, it’s almost time for Spiel in Essen – there will be a massive amount of gamers there! We received our press passes last week and we’re so looking forward to this weird five-day event filled with board games and cool people.

And to train us for those very intense days, we’re also visiting Tabletop Gaming Live this coming Saturday in London! We were actually going to be in London for other business and we didn’t even know that there was a convention. So we freed up our schedule on Saturday and we’ll be roaming the halls during the day. On Thursday night we’ll be visiting Draughts in Hackney, so if you’re in the neighborhood and would like to say hi: feel free to come and join us for some drinks or even some games (depending on how many people are there)! 😀

Last week, we finally managed to free up some time for playing this weekend! That has been a while. We played a diverse pallet of games with What Came First, Architects of the West Kingdom, Aristeia and Silver and Gold. Glad to be playing some games again. 🙂

This coming Wednesday, it’s time for the Autumn Prize festival over at our Patreon page! We’ll be giving away fun prizes like a shirt or tote bag from our merchandise store or an appearance in one of our comics. If you like our comics and you’d like (and are able) to support our work financially, you can consider becoming a patron! There are different benefits for different tier levels and you get early access to our comics and with every change of the season, we’re giving away some cool stuff. We don’t make any money with our weekly comics, so we really appreciate the support of our patrons. 🙂

Which description of board gaming jargon did we forget?

Deck-builders: Game where you use cards or tile to assemble a deck of a ship or similar floor plan.
Asymmetrical games: Games where the board is difficult to read up-side-down.
Engine games: Games that contain an engine. Think of bumper cars!

The best example of a co-op game I know of is Robinson Crusoe: Adventures on the Cursed Island. Even with 2 people and 2 hours, we didn’t understand the rules….

Real-time games. As opposed to those shifty fake-time games!

Social deduction games: games where the hardest part is figuring out which platform to post about your playthrough on
Press your luck: the act of flattening a four-leaf clover in the pages of a book.