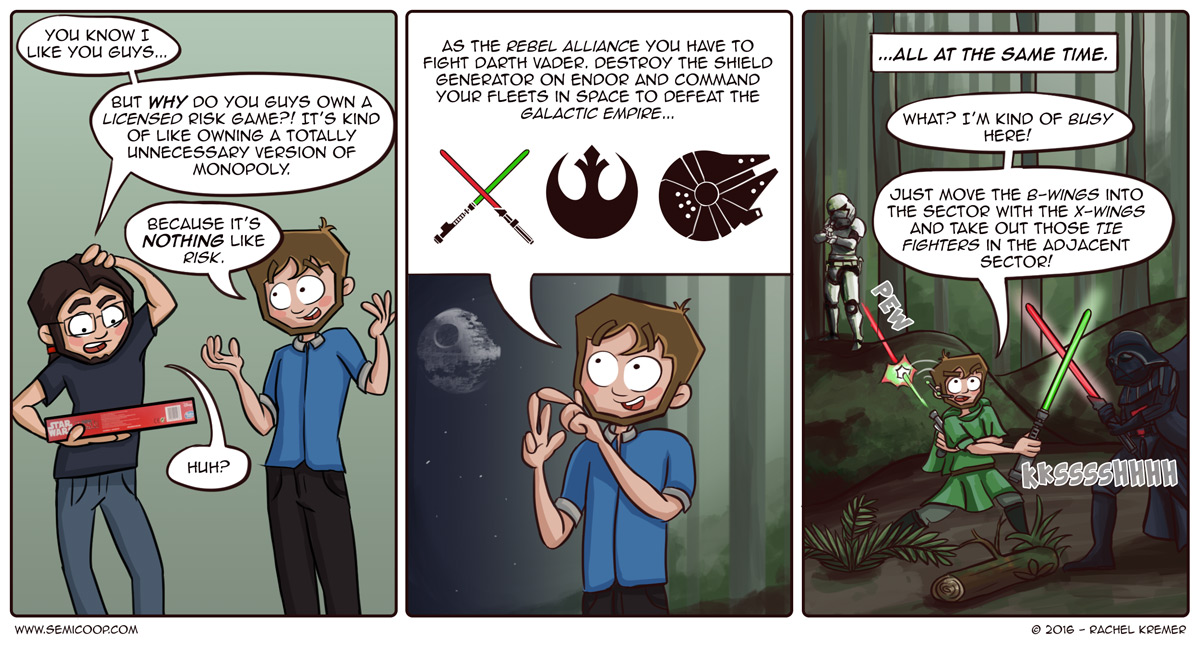 Star Wars Risk is a game that suprised us completely. We had heared that is wasn’t really like Risk (which is a good thing because I’m not a big Risk fan), but it turns out that it REALLY is nothing like Risk! The board is shaped as a TIE Fighter and divided in three parts. The middle of the board is the big epic space battle and the two sides of the board are for the fight between Luke and Darth Vader and the battle for the shield generators of the Death Star. The components are of a slightly lesser quality than most games have nowadays, but if you get it for a right price, that shouldn’t be too much of a bother.

This weekend was our big game day! Eightstravaghanza! It started out with us wanted to play Captain Sonar and sending an invite to a bunch of our friends… with the idea that a lot of people already had things planned that day and we would end up with 8 players. But no! In the end about 20 people came to play games at our place! We had eight players playing Captain Sonar downstairs in the kitchen, people playing Tricky Towers on the Playstation in the livingroom and we had another group of people playing other games upstairs in our working room. Other games that were played  that day are Cash ‘n Guns, Tokaido, Secret Hitler, King of Tokyo and Formula D.

It was a great day with a lot of our friends and it’s even greater to see people having a great time together even though they don’t all know each other.

Since Rogue One has just been released…

Star Wars Risk is indeed a fun game.
Great board on it’s own, lots of stuff to take into account, it can turn out completely different all of a sudden and it doesn’t take long to play.

The only Star Wars board game I’ve played is the Episode I edition of Monopoly, and…well, it’s Monopoly. Would love to try one of the more modern ones, but honestly they all look a little big and intimidating!

What did you think of Captain Sonar?

Tough call between Imperial Assault and Star Wars Rebellion. IA gives lots of RPG goodness that I crave, but SWR provides a lot of fun with its strategy and hide Ann’s seek elements.

Imperial assault! But that is mostly because it is the only star wars themed board game I ever played. Still it is a solid game with good rpg elements. Besides the group I play it with is awesome, which helps with enjoying any game 😉

In Star Wars Risk players will play as the Galactic Empire versus the Rebel Alliance! An epic battle between Luke Skywalker and Darth Vader, the attack on the shield generators on the Moon of Endor and an epic space battle with the final goal to destroy or defend the Death Star! It's called Risk, but it's nothing like it. ;-) Support us through affiliate links or visit your local game store: Amazon.com Bol.com (Dutch)