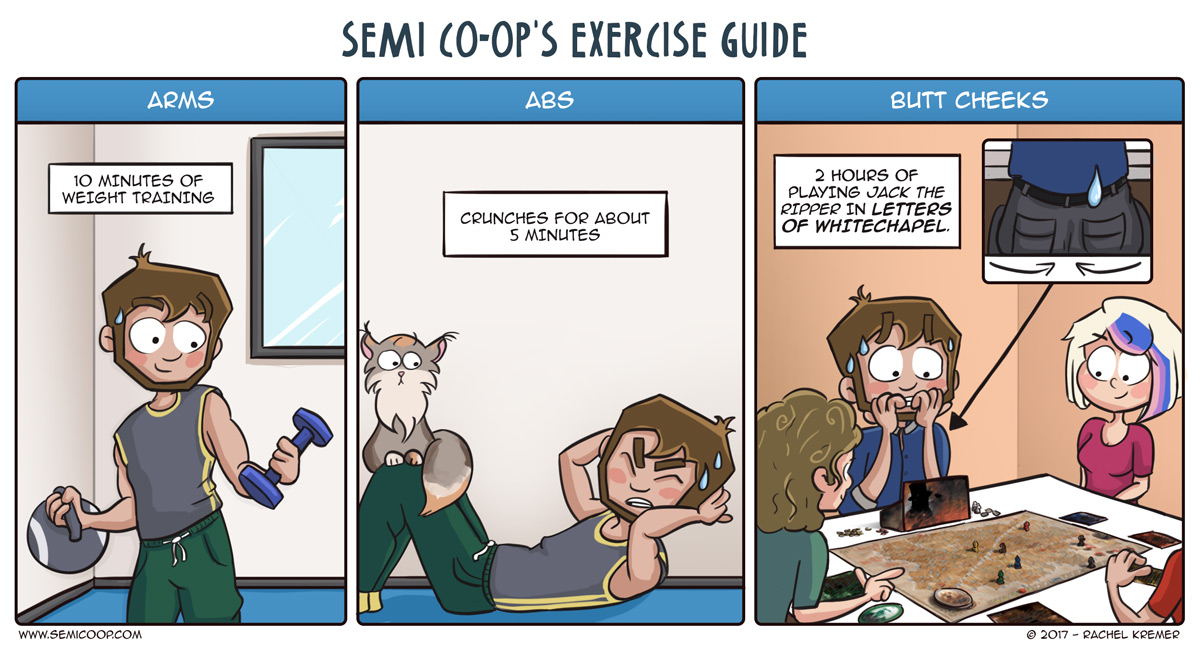 Letters of Whitechapel! The game that is incredibly hard for the player that steps in the shoes of Jack the Ripper while being chased by a mind hive of detectives. And when you’re playing against ‘smart’ players, chances are great that you won’t last long. We’ve played the game at least 4 times and only once did one of us manage to win as Jack The Ripper. And that was really, really, really close. I believe we had Jack surrounded. Imagine the stress for the Jack the Ripper player… and that’s we think it’s a perfect addition for your exercise schedule! 😀

I played Cottage Garden for the first time this weekend and it’s a fun game. I wouldn’t say it’s mind boggling, but it’s a perfect light game to play with a cup of tea while having some good conversations. It really feels like a longer and more eleborate version of Patchwork. I didn’t do as well as the other players who had played it more often, but I really didn’t care. I was just filling up nice gardens and was having a good time. Maybe I’ll get more competitive next time. 😉

What other games would be a perfect addition for this exercise guide?

Eheheheh! I know plenty of people that end up a Game of Thrones Board Game with their butt cheeks toned. Since it’s 3 to 4 hours, I’d say it’s a butt cheek marathon. For squats you have Arkham Horror with expansion. The game becomes so big that you keep getting up to reach cards or other parts of the table.

If you’re familiar with the wrestling dice game Luchador, it can be utilized to increase full body tone and flexibility.

On your turn, you may choose to roll the big black Luchador die in place of any two regular Hit Dice you may have earned. It’s a high risk/high reward sort of option, where the Hit Dice give more dependable but lower value damage.

There are three super-awesome success results on the Luchador die, however. These, link to a super-spicy piece of flavor text on your character sheet that describes a signature move.

For example, Bam Bam En Fuego’s “Flame Strike” says he “runs towards his prey, jumps high with his arms raised then swings down and karate chops both sides of his opponent’s neck. As the opponent collapses to the mat, Bam Bam lets out an evil laugh!”

Playing Codex makes you think SO MUCH AND SO HARD that you’ll burn calories by the truckload.

YES! I recently saw that i could try Codex on Tabletopia, so I should probably try to finally join you in the praises!

On arm days, I just pick up Gloomhaven.

Really? interesting when we played the 3 times jack won every time handedly because the carriage was ridiculously powerful.

Dominion, when you have all of the expansions. And I mean all of them. Lugging them to the play area is quite a bit of exercise, as is trying to balance all of the bloody boxes without dropping any of them.

Brett from Board Games 4 Two

Oh my goodness this site is so cool! Haha I recognise that butt clench!

1888. One of the players roams the streets of London as Jack the Ripper and the rest as the detective who are trying to find and arrest him. Will Jack be able to stay ahead of the detectives and be enabled to commit his horrible crimes? Support us through affialiate links or visit and support your local game store! Amazon.com