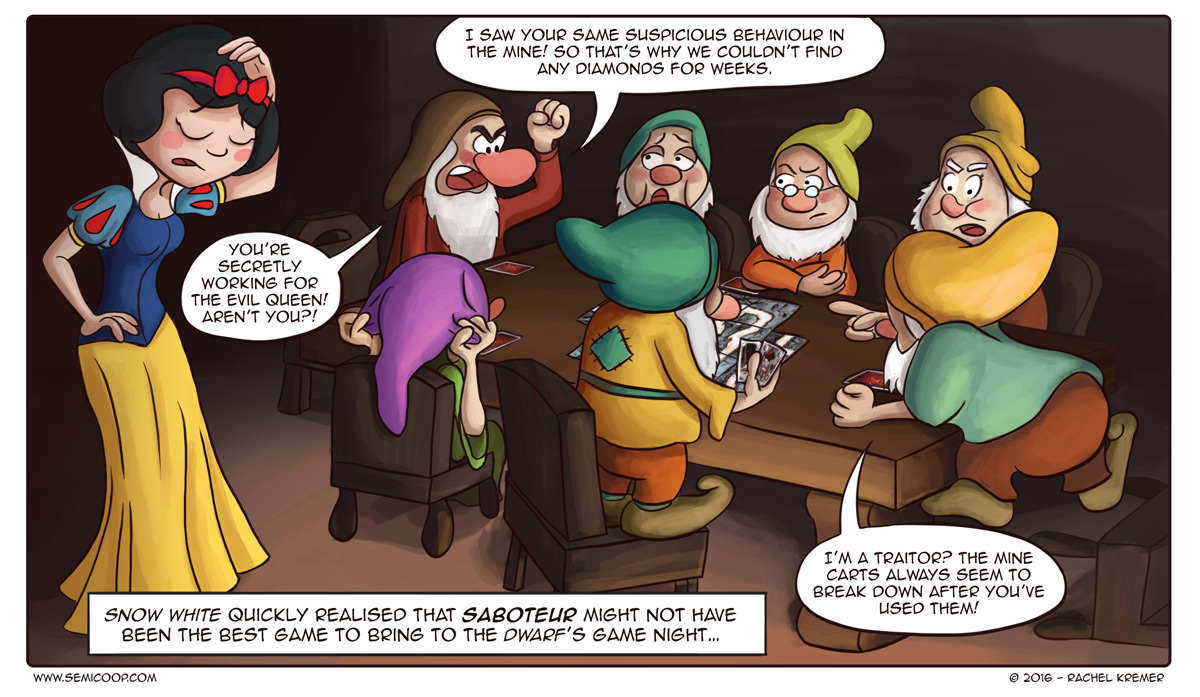 Hip hip hurray to Semi Co-op! Exactly one year ago, on the 11th of April 2015 (International Tabletop Day), we launched this website! Since then we’ve published 55 comics, had almost 40.000 visitors and together they’ve looked at more than 225.000 pages. Wow! There is only one thing I can say: Thank you all very very much! 😀 It’s been a great ride so far and it’s wonderful and motivating to read your feedback and to see the amount of visitors grow almost weekly. To be honest, I can’t believe it has already been a year.

As an artist I’ve learned a lot in a year and it’s enjoyable to see the style of the characters evolve if you compare the last comics with the first ones. That being said: it’s about time I update the header of this website, that was actually one of the first sketches I made for our characters.

This week’s comic is about Saboteur, a game about dwarfs mining for gold… but one of them might be a traitor, he might be the saboteur! The connection to Snow White and the Seven Dwarfs was quickly made in our heads. This game is a classic and a must-have if you’re looking for a party-like game for a bigger group of players.

Which fictional character would you like to play a game against?

a semicoop in the comic semicoop. if thats not inception..

or its a game, within a game, that hase a other hidden game within.

as for fictional character, anny would do. it wold even be fun to play pingpong with a my little pony, even tough i am not into that..

Playing Game of Thronnes Board Game on the Stark side against the main leaders of every other house in the game would be cool. Playing Imperial Assault against Vader would be a frightful and intense experience while I’m sure it would be fun to play Dead of Winter against the Big Bang Theory characters.

Congrats on your first full year!

would be fun to play Jab with the Tooth Fairy

I’d love to play a game with the Ninja turtles

Emergence is just finishing up on Kickstarter tomorrow, if traitorous co-op is your kind of game. Looks interesting!
https://www.kickstarter.com/projects/976097678/emergence-a-game-of-teamwork-and-deception?ref=48hr

Congratz for this this first year !

Like to play an X wing game against Luke Skywalker.

Sorry, but I think Mice & Mystics with Disney princesses would be adorable; perhaps Rapunzel from Tangled, Anna from Frozen, and I’m thinking Belle from Beauty and the Beast to temper the chaos? 🙂

Whoo, what a great question this is!

There is something amiss in the mine! Tools, laterns and carts seem to break a lot! There might be a saboteur among the players, but who is it? That is something players will have to find out while they dig their way to the gold nuggets. Support us through affiliate links or visit your local game store! Amazon.com Bol.com (Dutch)