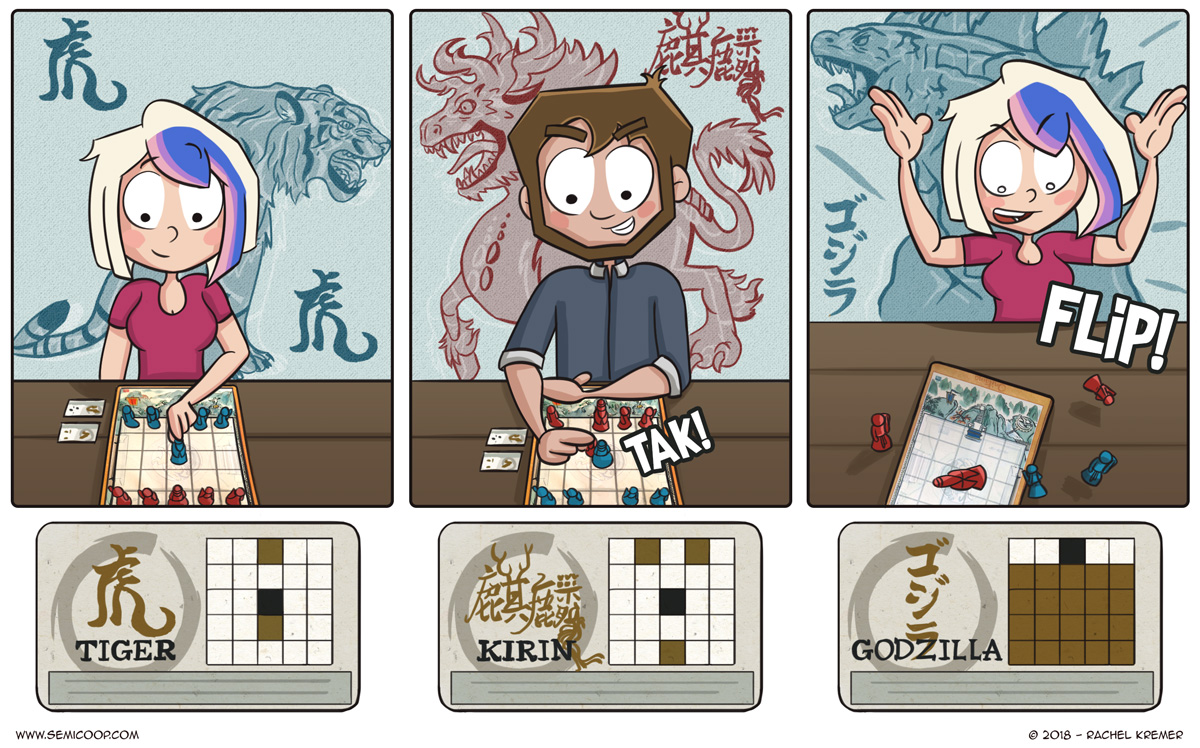 Onitama is a fun abstract chess-like game in which the moves your game pieces can make are determined by which card you play. The goal is reaching the starting space of the opponent or removing the Master pawn of the other player by landing on its space. It’s a game with a high level of ‘if-this-then-that’ since two of the next possible moves of the opponent are known to you.

We’ve only played the app version of this game and that’s certainly worth checking out as well! I think this is an app we’ll be playing a lot while traveling by train. Note that Godzilla is not an existing card in the game but part of the joke. 😉

These last weeks we’ve been playing a lot of the same games: Gloomhaven, Cthulhu Wars, The Lost Expedition, London and Arkham Horror the card game. And yesterday we’ve finished the Dunwich Campaign of Arkham Horror! It was an epic finale in which just one of our characters managed to survive. My character was killed after an epic action that made it possible for us to win the game. Alas, there was no chance for him to make it to the end. Luckily, Heinze’s character did and thus we ‘won’!

Since 7th Continent will be delivered very soon (excited!), we’ll stop playing Arkham Horror LCG for now, we love the game, but we’re playing too many campaign games right now and want to have time for some variation. 😉 We’ll pick it again when things quiet down.

What’s your favorite app version of a tabletop game at the moment?

The App version of Yomi makes keeping track of all the minute rulings a lot easier, so games go by that much faster and you can focus on having a good match

I did not know that Yomi had an app! Just waiting on a sale so I can grab it 🙂

We’re going to finish Dunwich tomorrow! At Restaurant Ons (back2back with Comicasa). I hope one of us will survive, we already had a few close ones last two scenario’s

Onitama has been pretty much my favorite two-player game since its release last year. I wish I had an Android device to play it in app form. Hopefully it hits iOS soon.

Such a great game!

My wife and I thoroughly enjoy Lords of Waterdeep on our tablets, and Potion Explosion and Ticket to Ride also hit the tablet frequently (see what I did there?). I am also very much a fan of Thunderbox’s ports of Tsuro and Roll For It.

We dig Potion Explosion as well! But Rachel is really good at it, so I’ll have to step my game up to keep it fun ;).

We just utterly lost the Dunwich campaign. We went so well, but Yog-Soggoth came and devoured us all

To bad! He is terrible though, we just looked at the card and were real happy he didn’t show up in our game. Does Ons have a boardgame night btw? I seem to recall somebody else talking about playing games there as well.

The app versions of Ascension and The Pathfinder Adventure Game are both pretty solid time killers and cheaper than trying to keep up with the physical games by a long chalk.

Onitama is an abstract strategy game for two players. Players take on the role of a Master, guiding their monk followers and try to defeat the opponent. Chose the right moves to remove the other Master from play, or to reach the starting place of the opponent to win the game. Support us through affiliate links or visit and support your local game store! Amazon.com