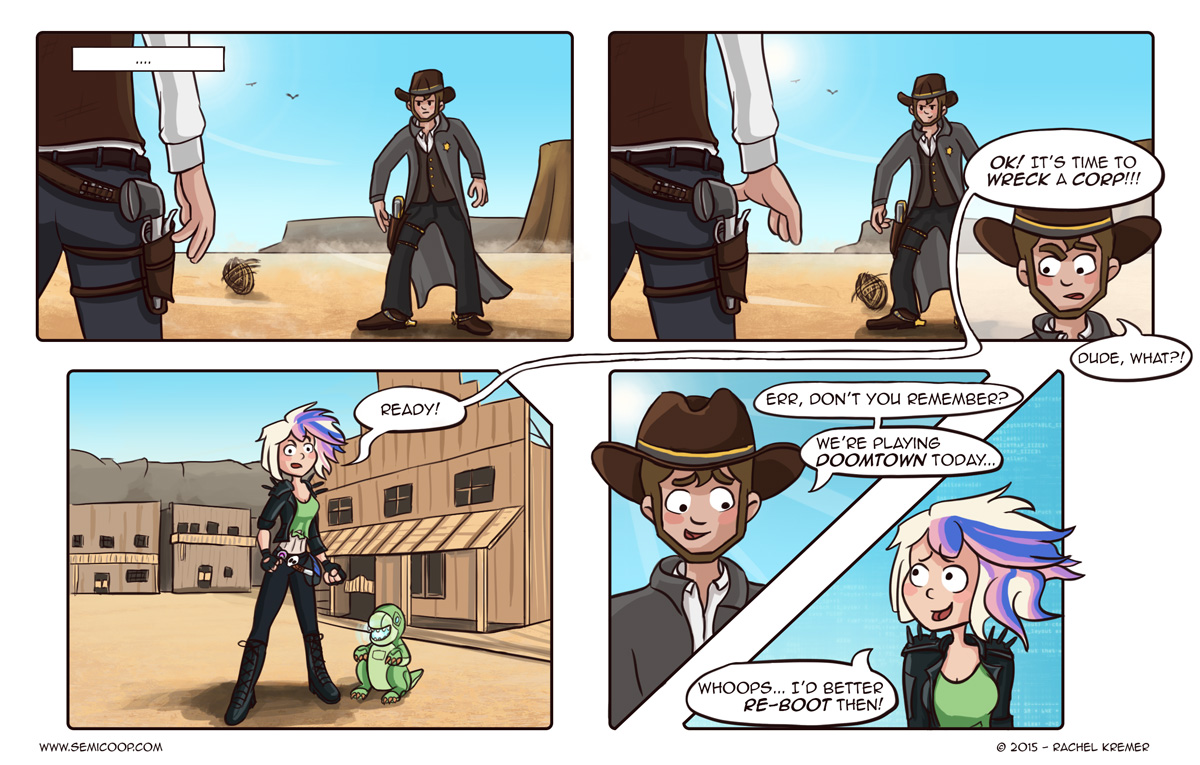 At our FLGS (friendly local gaming store) we met somebody who is a big fan of Doomtown and has very balanced decks of all the Doomtown outfits (factions). He invited to us to come play Doomtown one day and so we did. I’ll be honest: the first time it reminded me of trying to understand all the different terms in Netrunner. Only instead of runs, stimhacks, ice breakers and agendas I had to get a grip on dudes, posses, deeds, upkeep, booting, shootouts and many more terms. But what a game! We played the game with four players and it was a lot of fun. I love the poker element in the game, it just makes it completely different than other games and it’s smoothly integrated into the game play.

Since we don’t own Doomtown ourselves and we’re pretty deeply invested in Netrunner, this is a game we like to play at a more casual basis. To be exact: we’ve played it only two times now, but I’m already looking forward to grabbing a my leather boots, long coat and cowboy hat to go out and play Doomtown again.  Yeeehaa!

And for the folks in the USA: the base game is less than $20 on Amazon, lucky you!

What collectable living trading card game do you play at a more casual basis?

My boyfriend and I own a doomtown set and I’m sooooo loving it! He loves using the Fourth Ring and I prefer the LawDogs so it’s some interesting play going about hahahaha! If i were to describe this game it would be like poker, netrunner, and magic the gathering got mixed into this game about cowboys and magic rocks 🙂

Excellent description of Doomtown! 😀 I’ve only played the Lawdogs and The Morgan Cattle Company so far. Looking forward trying the other outfits,

I got my wife into Netrunner when FFG re-released the game. We haven’t played in a while, and I’m a few expansions behind, but it’s still my favorite card game. Though, FFG’s Legend of the Five Rings announcement has me really excited.

I like that in Netrunner, older cards are still very common in tournaments. We basically only have datapacks of the first and the second cycle next to the bigger expansions. 🙂

Tried to get the girlfriend into Netrunner and she played out of love for me, but never seriously. We tried Doomtown on a whim and we’re both committed and play in tournaments. The game has a great deal of chess/strategy, luck (in the same way poker does), and theme to spare. Cannot recommend enough.

I feel the same way. I think Doomtown is one of those games that you either love or hate. Normally it wouldn’t be a game that I’d easily recommend, but with the base game only being 18 dollars, people can hardly go wrong. Btw, it’s really awesome that you guys even play in tournaments!

You’re the one with the brains here. I’m watching for your posts.

Every LCG I’ve touched so far, just to see what it’s like, I ended up buying. I’m collecting so many. Please send help. Or money. Or cards. I can never touch Doomtown, it’s just too risky.

This feeling. Yes. That’s why I refuse to actually buy other LCG’s than Netrunner right now. The temptation is horrible though. One thing is for sure with all the trading card games: the base set will not be satisfactory once you like the game.

Lord of rings for me a formidable and entertainning game, with a bit of difficulty.

I’m so curious about that game! How’s the replayability once you’ve actually managed to beat the deck of evil dark things?

There is numerous adventurers to choose from and play with, against the evil dark things.
Like regular trading cards games, you can attempt to create and play different sorts of deck, with different thematics.

Hello ,
Thanks Rachel for those amazing comics. I have discovered those long time ago and as a big fan of boardgames with my GF we look forward to see if there are some fictions of games we onw too, as it is sometimes really close to our own experiments ! xD
I’m a long time fan of CCGs too, MtG, L5R from something like near 20years, and with a friend that own a store I tested every signle CCG that showed up (yes , I even tested Pokemon and Wizard of Mickey or My Little Pony ! And some are amazing games… If you don’t bother playing with kiddies xD). As I grew older and older,, need to grab and spare some money for house, cars, kids and all that stuff that you inherit with adulthood: I had to focus on less and less games. And then the amazing AEG society decided to relaunch Doomtown, with rules revised from the older game ! And what a good surprise to see their new work. I really recommend anyone to go for this game, the base set can act as a good boardgame too for 4 people if you don’t like CCGs ! Cause the basic core set have 4 premade decks that are lot of fun by themselves and with 4 really exciting factions !
Here in Paris (france) we play Doomtwon every week now and have tournaments every two weeks just for fun, good moodings, and sometimes have dinner or just beer after the meetings !
If you come to Paris one of those days any of you, know that you can allways come to play Doomtown , or any other Boardgame (we have a lot in our FLGS for demos ! ) and have some fun with you guys !
Cya cowboys !
And Rachel please keep goin’ on ! Cheers dudes !

Grab your leather boots and cowboy hat and put on your poker face for Doomtown! Enlarge your influence by buying deeds to take control of the town. Take your dudes and their posse to the town's square for a shoot out! Doomtown is most surely the only expandable card game in which you play poker and shoot at each other. Support us through affiliate links or visit your local game store! Amazon.com Bol.com (Dutch) 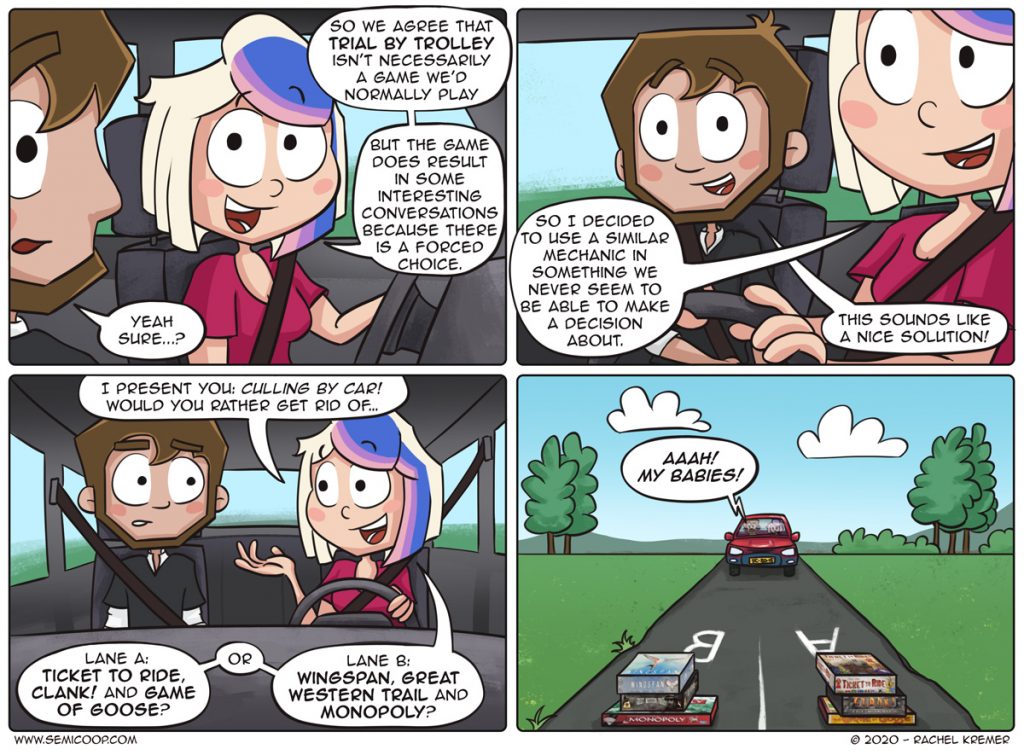