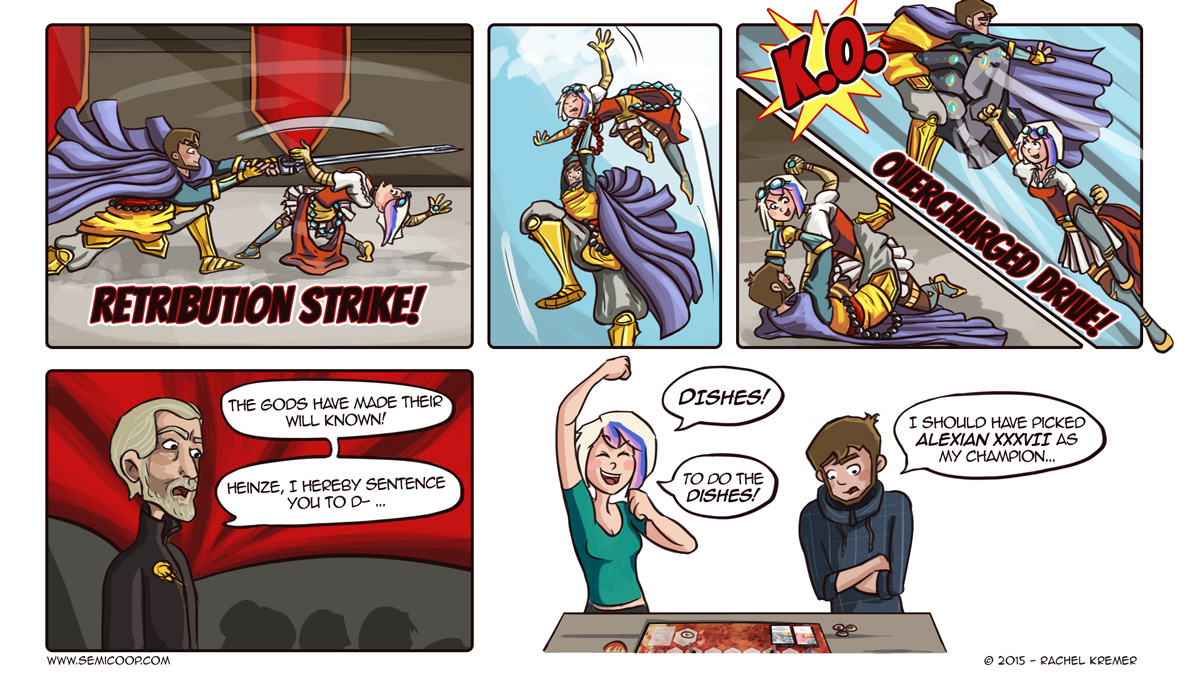 Yes, this week’s comic has quite some geek layers going on (hello Game of Thrones!). But most importantly is of course BattleCON!  It took Heinze quite some effort to make me try this game about a year ago, I didn’t really believe in the concept of a fighting game as a board game and I thought it was quite too expensive to just ‘try it’. It’s not an easy game to get your hands on here in The Netherlands and due to obscurity not a game you will find in the demo section of game stores. But then Heinze showed up with the  print-and-play of BattleCON and I thought it was rather amazing. Even though it’s rather simple, it works really well and does have that fighting game vibe going on.

We’ve had the game for a few months now and we’ve only played with characters from the novice and beginner’s flight. That’s why the characters in this strip are not from the more advanced pools. We have the feeling we’ve only scratched the surface of what BattleCON has to offer, and that’s very cool and promising. I can’t wait to try all the different fighters, arenas, game and play modes!

If you’d like to get a taste of the game, check out the  BattleCON Print and Play: http://www.battleconnection.com/uploads/Devastation_Preview.pdf

Do you know any games which are excellent to settle an argument with? 😉

we settle argument with Machi Koro and once with with a strip Machi koro !

ow i would rely like to try battlecon out. as for argumenst you can setle them with dice. (highest nr wins).

I can totally relate to this! lol.

Hive and Onitama are my games to resolve disputes usually. But i wanted to try Battle Con for some time now.

Is it possible to have a fighting game like Street Fighter as a board game? Battlecon proves that it can be done! With over 30 characters to choose from, many interesting arenas and a lot game play modes this game is well worth it's money. Oh, the game also offers you a dungeon mode in which you can team up and work your way through a dungeon and fight end bosses! This box has endless content. Support us through (affiliate) links or visit your local game store! Amazon Spellenhuis (Dutch)