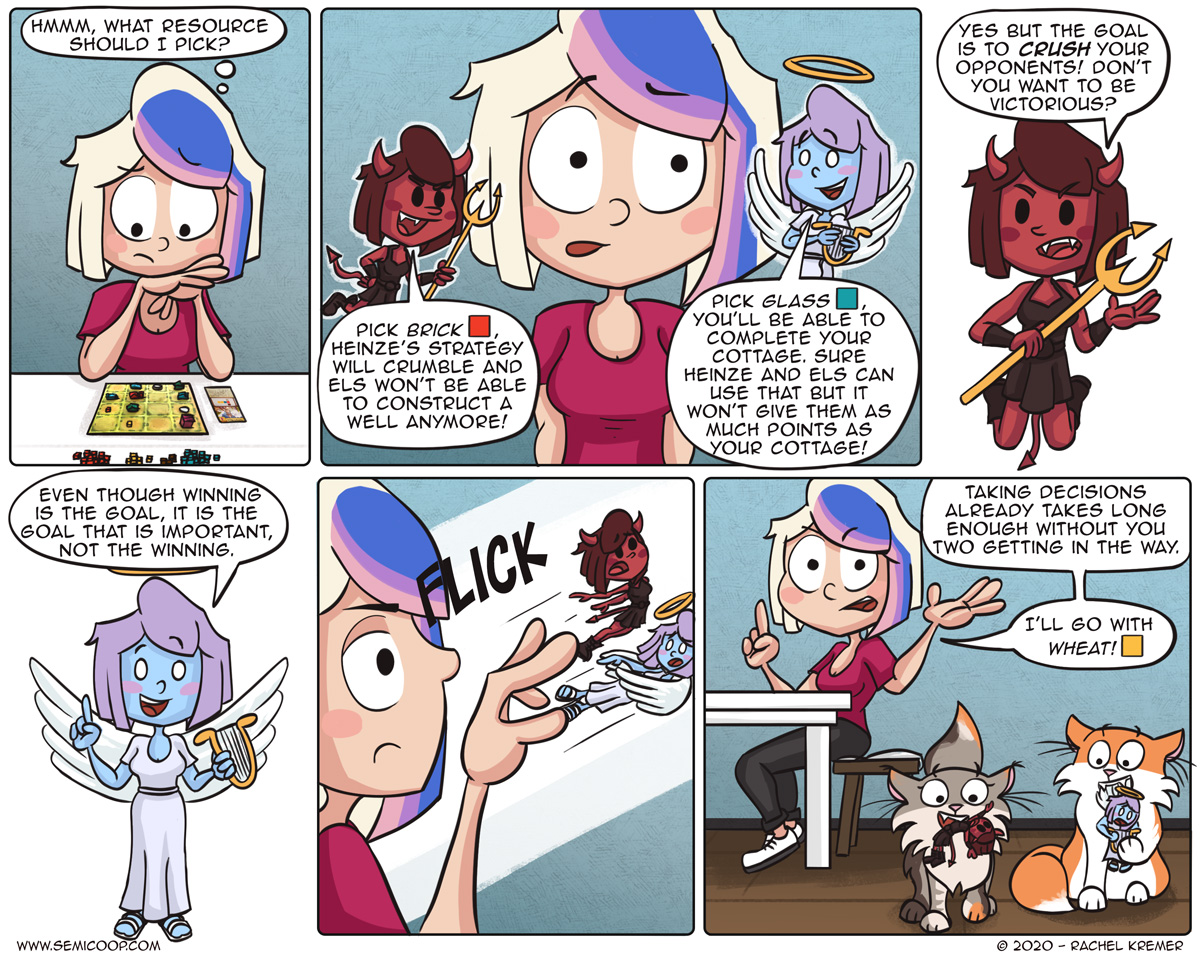 While we agree that games should be played to win, there is a line what you should do to secure the win. Reinier Knizia has a famous quote that goes:

When playing a game, the goal is to win, but it is the goal that is important, not the winning

And it captures the problem very succinctly. If you don’t play a board game to win you could ruin what makes the game work but if are willing to take away all the fun of other players you also ruin the game. There is a fun BGG thread to find the origin of the quote if you’re interested.

We are both pretty nonconfrontational players, we don’t seek out moves that hinder our opponents and will choose a move that benefits us over a blocking move. We have some friends that are a little more aggressive in their playstyle which is cool because even if we’ve played a game several times it will show us new ways to approach the game. Sometimes however we realize that a more aggressive playstyle doesn’t fit the feel of the game as we recently noticed in Tiny Towns. The normals rules in Tiny Towns have one player pick a resource and the other will have to put the same resource on their board. Because board space is very important in Tiny Towns, getting the wrong resource at the wrong time can pretty much wreck your game. So when we played it with more aggressive players, the game quickly changed to a game about blocking your opponents instead of constructing an idyllic village filled with cute buildings. While it’s perfectly within the rules, and for some players probably their favorite way to play the game, we transitioned over to the city hall rules in which resources are mostly decided through card draws to avoid such confrontational behavior.

Our mentality what is too aggressive differs per game obviously, when playing a two-player game everything is fair play. Games that involve combat are generally more aggressive but even in those games, there can be things that can be considered confrontational. In the Undaunted games, we think it is perfectly fine to shoot at the opponent’s units, it’s a war game so taking out units plays a big part. The scout unit however can not only shoot but also “conceal” which fills the opponent’s deck with useless “fog of war” cards. this somehow feels a lot more aggressive than shooting and taking out units, even though it’s a much more passive way of hindering your opponent. Realizing that that passive action feels much more hurtful is one of the things that make Undaunted such cool games.

Speaking of nonconfrontational games, we played a whole bunch of them this week! We played Flamme Rouge which is still so great! With the Tour de France wrapping up we feel a need to do a Grand Tour campaign using the free app because the game is short enough to knock out several races in a day and the campaign has some cool rules about retaining exhaustion cards after every race. We also played Calico, which is a simple tile-laying game with three scoring mechanisms that often interfere with each other, leaving a fun point optimization puzzle for you to solve. We really enjoyed it plus it has pretty art filled with cats! We also played Truffle Shuffle which takes the drafting pyramid of Seven Wonders Duel but streamlines it into a simpler set collection game. We have to play it a bit more but it feels a bit like this does for 7 Wonders Duel what Sushi Go did for 7 Wonders, which we think is great. We also played Mariposas which looks great but felt a bit empty with just two players, we hope it gets better with more players as it has a fun generational gameplay mechanic we haven’t seen before.

This week we’re trying to get Sabotage to the table for the first time. It will probably just be a two-player game against the app but we’ve wanted to play it since getting it last year at Spiel and we’ve decided that now is the time! We’ll also continue our Gloomhaven campaign and probably play some more Calico or Mariposa if we can get some more players together.

what is the most aggressive play you’ve seen in a game?

This one guy I used to play Biosphere 5 with on Tabletopia. He didn’t just play to win, he played to wipe my colony from the face of the planet.

I’m a big fan of what I teach my kids. We play games to have fun. It’s nice to win, but so what if you lose you had fun on the way, That was really the point all along. I make it a point to tell them if we aren’t having fun, then we will put it away. It doesn’t matter if we just started, or it’s the last turn. It’s only taken me putting a game away a couple of times for them to learn that I mean it. I also don’t believe in letting them win. They don’t learn from the experience. I always go back and show them where they went wrong, and how they could have done differently. It’s made them gracious winners, and understanding losers. When they win, they know they earned it.

Tiny Towns is a game about building a cute village on a four by four grid. Buildings are constructed by laying out the resources in the right shapes and combinations of resources which sounds easy but creates a great puzzle game full of tough decisions. 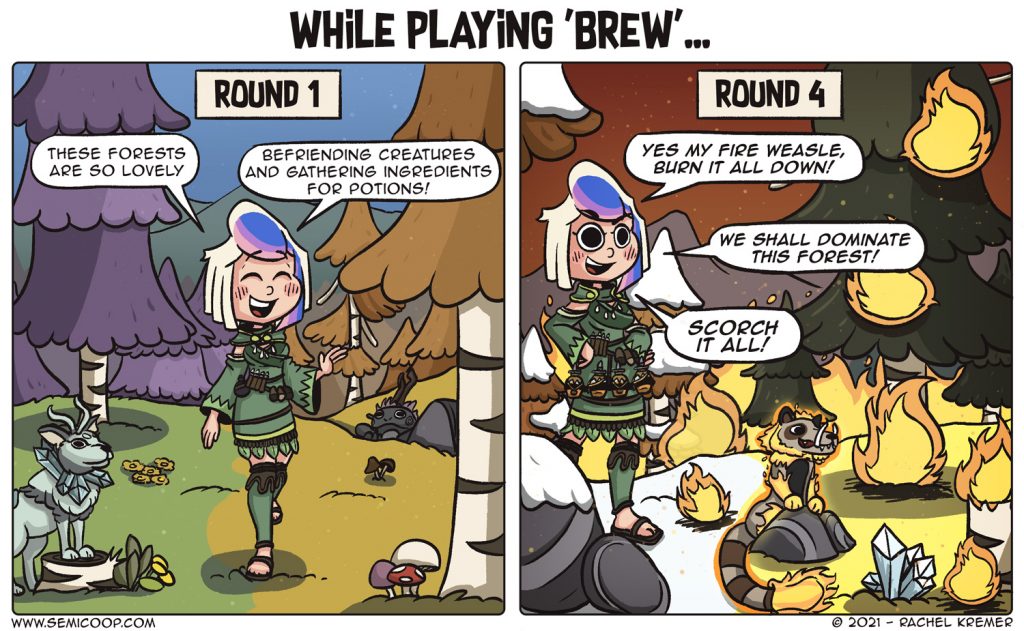