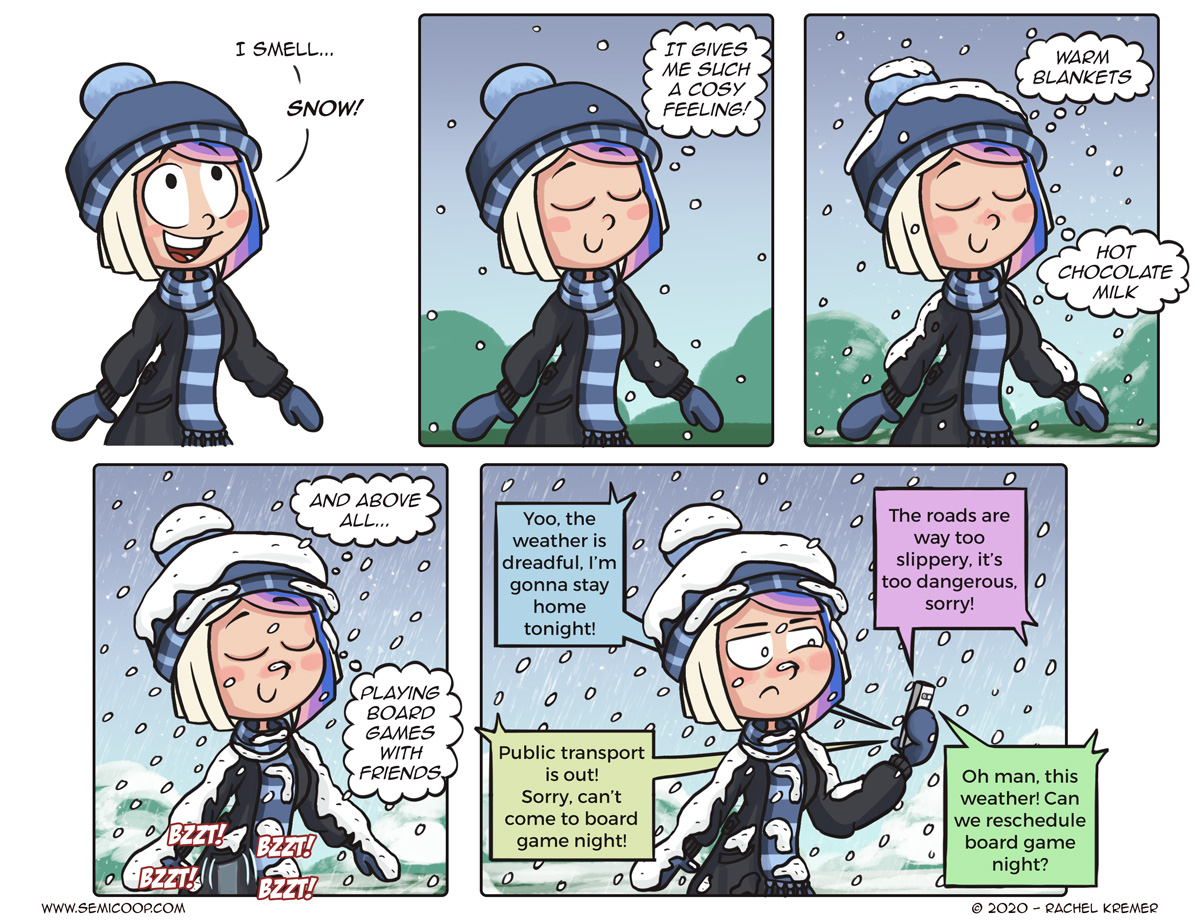 Happy 2020 everybody! It’s been a strange week for us. First we had to end our extra “sketchie” comics but on Friday we got to show the first comic in our super cool comic series that takes place in the world of Godtear by Steamforged Games. Luckily, we also got to play some good games and celebrate the new year with friends and family!

Today’s comic is about a very real problem for a lot of our gaming groups. Most of our commutes to and from gaming groups are done on a bicycle, we (and most of our friends) don’t even own a car. This means that whoever is hosting game night is lucky because they don’t have to face the elements riding on two thin rubber wheels to enjoy some gaming. Especially in the winter, it can be a bit of a hurdle to get off your warm couch and go out in the cold.

We did face the cold a couple of times this week to enjoy some gaming, and some people did to same to enjoy games at our house. We’ve played the “Race to the Top” scenario in the K2 broad peak expansion which is even meaner than the base game which meant one unfortunate climber didn’t make it down while several others were really close to joining his fate. Heinze played four scenarios of Undaunted which is very very good. We also played Plunderbund for the first time demoing it at Spiel and it was nice to see it lived up to the excellent first impression it left in Essen.

Lastly, we got to play Coloma which is an action selection game with a very cool magnetic wheel, that you can see in the picture, that blocks or changes action you might have chosen. If you are the only one choosing an action, you’ll get to do that action but gain an additional bonus action on top of that. If another player selected that same action, your bonus action will get blocked off! If you selected the action left of the blocked off action you’ll get to do a bonus action but it will be a different one than you thought it was going to be. The game can be quite an instigator for Analysis Paralysis but if you like the idea of action selection wheel with a twist and aren’t afraid of games with quite some things going on, this is one to check out.

Literally a single drop of rain hours prior.