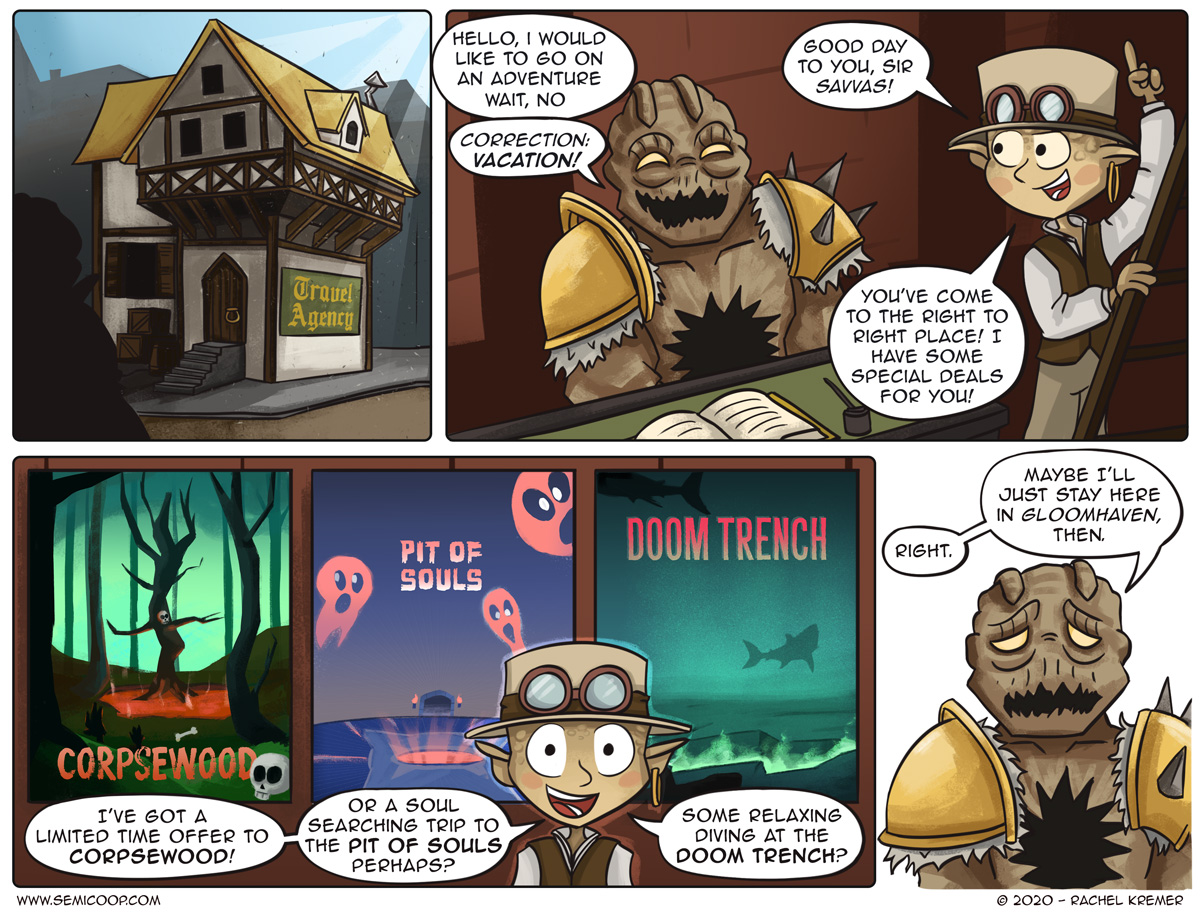 We love Gloomhaven and one of our favorite things is putting the map on the table and figuring out where we want to go next. The map in Gloomhaven is a wonderfully illustrated and very big mounted game board which is only used to put on some stickers on to show the discovered areas and track the global progression of the game. While peering over the map we often try to imagine what to locations must look like to deserves such gloomy names. With my Cragheart retiring, we thought he had earned a nice vacation only to realize all the locations near Gloomhaven sound dreadful and thus this comic was born!

Speaking of Gloomhaven, it has been a while since we played it! Rachel had a bit of a cold last week and we decided not to take any risks resulting in canceling two game nights. Luckily we could quickly reschedule our game of Battlestar Galactica!

BSG is one of our favorite series, we named our cats Starbuck and Apollo, and we’re in the middle of rewatching it. So we really enjoy playing the board game even though it can take quite a bit of time, our game on Saturday took almost six hours. I was the Cylon the first time and would’ve had probably won if I hadn’t accidentally thrown my fellow Cylon in the brig when I was president. While the Cylons got all the resources quite low it didn’t stop the humans from jumping early, losing a part of the fleet, but still winning.

This week we haven’t gotten any game plans yet but we’ll be seeing the Fellowship of the Ring extended edition in the cinema, which has a lot more locations we would love to visit during a vacation than Gloomhaven…

In which board game would you like to take a vacation?

I look over at the shelf of favorites and realize that we are already living in the world of Pandemic! I love Agricola, but I wouldn’t want to be a starving farmer.

As a hot pepper enthusiast though, I think I would enjoy a trip to Scoville, where the only thing bad that could really happen is someone else getting the best peppers and chili recipes!

Actually, there are lots of interesting places in the BattleTech universe.

Don’t be silly: all the places have names like that in the Land of Terror!

I wanna take a vacation in Dinosaur World. If these Jurassic Movies were ment as a warning, then I don’t care because dino petting zoo sounds awesome!

LeHavre seems quite lovely? Fun game that I’m bad at yet still enjoy playing. (I just build my little sector, have fun with my little shops…) I’d go there.