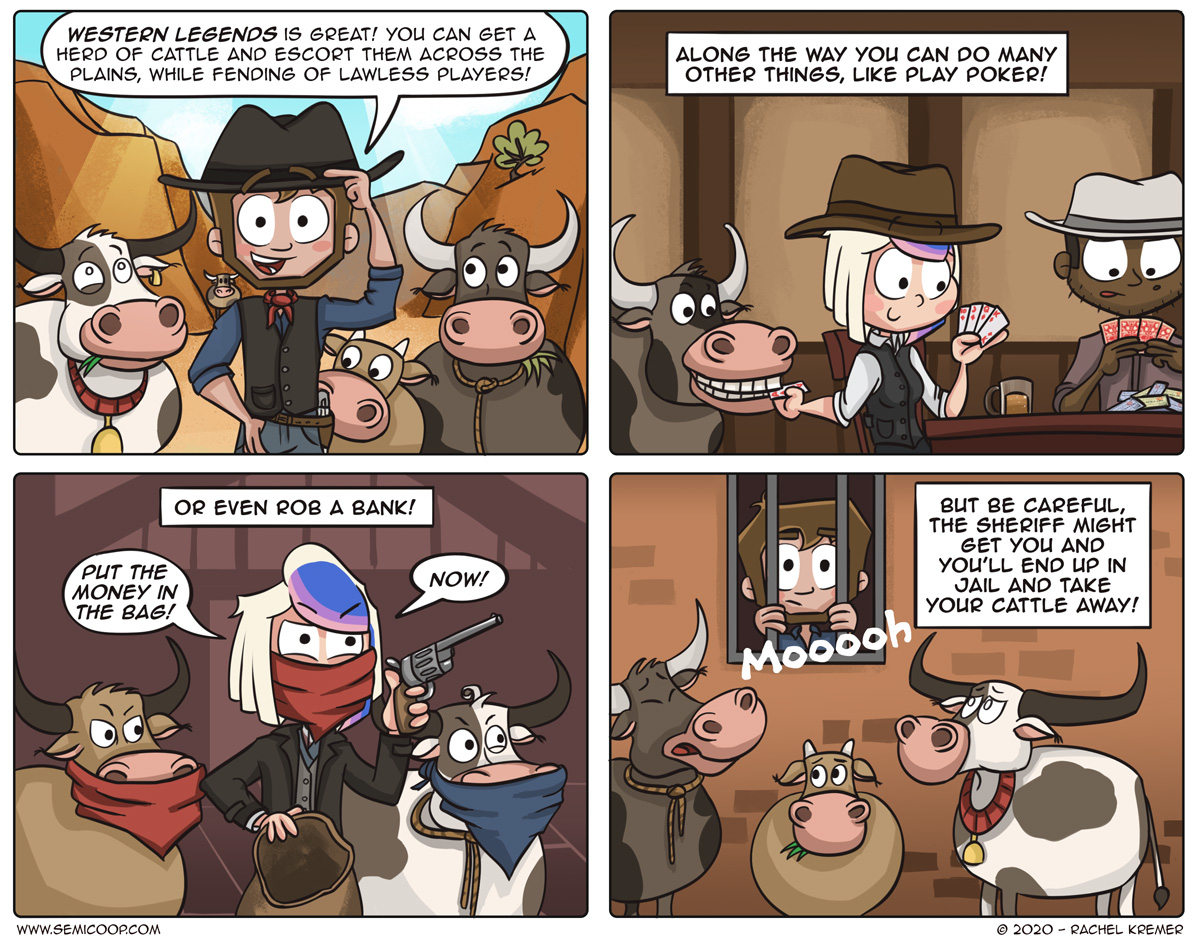 Western Legends is a fun sandbox full of sheriffs, bandits, and outlaws. The game doesn’t really care how you get your points, as long as you get them. Most of the time we’re not playing very aggressively which turns it into a cow herding game with some poker matches in between. Being an outlaw, however, can help you land some quick points when you’re sprinting to the finish line so often you’ll see some goody two shoes suddenly rob a bank in their final turn. During one of those robberies, someone mentioned they had their herd of cows backing them up, which resulted in such a fun mental image we had to make this comic.

We had a busy week, we did a very movie quote heavy sponsored comic about Dinosaur Island, we had another Godtear comic and for TabletopGameLive virtual gaming con we made a behind the scenes video deconstructing our process behind our Culling by Car comic!

Gaming-wise we got in some good games, we played some older titles like Clank! and Quirky Circuits which we both still think are very very good. We also did our first exploration of Fowers Games’ Sabotage! Tim personally handed us a copy of Sabotage during last year’s Spiel and we’ve been trying to find two other players to get the full experience ever since. Yesterday we decided that we wanted to wait no longer and played one intro game against the free app and an intro game against each other. Now that we know the rules we’re pretty excited to play a full game and hopefully we’ll be able to find some players soon. It does allow for a social distancing type of play, so if you like hidden movement, team games, and spy gadgets you might want to look into this game. No Pun Included did a great review of Sabotage last year if you want to know more.

What type of player are you in sandbox games?

I…tend to be the sort to poke at things and see what happens. Because it’s fascinating to see what happens with the rules. And usually, I tend to avoid breaking the law unless it is literally the point of the game.

Whenever the option is available I’m the explorer, no real thought of how to win the game, just wanting to go further and deeper with the map/lore.

Western Legends is a sandbox game set in the Wild West. You want to become a famous outlaw or just make your name mining gold? Western Legends lets you do that but beware for robbers and players taking advantage of your position! Support us through affiliate links or visit and support your local game store! Amazon