My City was kindly provided by 999 Games for free. We thank them for giving us this game that led to this comic! For more information on how we deal with gifted games, please see our FAQ.

Tetromino games! We enjoy them a lot as most of the time it means you get a game that has loads of interesting moments while filling the puzzle on your board without getting bogged down in loads of rules. Because loads of tetromino games like Patchwork allow you to flip the piece to make it fit a space, My City has surprised us multiple times with S pieces turning out to be Z pieces destroying our plans for a beautiful little town and leaving us with ugly gaps in city building plans.

My City is a legacy campaign tetromino game which is something we haven’t seen before. We’ve played three of the eight chapters so far and it has been fun although the first chapter felt very basic. Chapters two and three were a lot more interesting and with every game only taking about 20-30 minutes, it’s easy to play the three games that make up a chapter in one sitting. Because the games are short and the rules are simple this actually could be a great game for people that want to see what legacy campaigns are like without having to commit a whole lot of time playing a complex game.

We had a busy week so we didn’t get to play a whole lot of games but we did try the first scenario of the Lost Ruins of Arnak solo campaign “the search for professor Kutil“. Because we both wanted to play it we just pretended to be one player and while this is a free bit of extra content you can play using the web app we linked to, it is very well done. The web app takes care of the solo bot, it offers you little bits of choose-your-own-adventure moments while exploring new sites and gets creative about tweaking rules to make thematic changes that match the goals for your scenario. Lost Ruins of Arnak was already our favorite Spiel 2020 release but this pushes it even higher. Somebody on our Instagram said the other scenarios in the game are even better which got us excited to see more of it. 🙂

This week there are two games that I look forward to, the first is the start of our Pandemic Legacy Season 0 campaign and my first ever game of Warmaster. Warmaster is an old Games Workshop miniature game about commanding massive Fantasy armies and I’ve been 3d printing little 10 mm skeletons, vampires and knights for months now. I’m not sure I’ll get it all painted before Saturday but it will look cool on the table no matter what.

In case you missed it, we’re getting loads of commissions for comics about cool (upcoming games) recently! Last Friday we did a new Godtear comic about Helena, a champion break the standard game rules in a very cool way. Thursday we did one for Maximum Apocolypse, a rogue-lite survival game, and the week before that we did one for Chai, Tea for 2, which is a great dice placement game about growing and trading tea. We feel very privileged having all these cool publishers reaching so we can make more Semi Co-op content, so we hope you check out their games and maybe let them know that you found their game through our silly little jpegs.

Not a specific game, but any game with a set number of rounds/actions per round. Making big plans, set up a way to make a boatload of points, then reaching the last round realizing you’ll get to take 6 actions and need 7 for your plan.

The number of times I have had some jerk snake the card I needed in DC Deck Builder/Ascension…………..

My City is a competitive legacy game in which you develop a city by placing tetromino-shaped buildings on your board. The campaign is eight chapters long that will introduce new rules, buildings and twists to the simple base games, each chapters consists of three games that take about 30 minutes per game making it a great first campaign game. 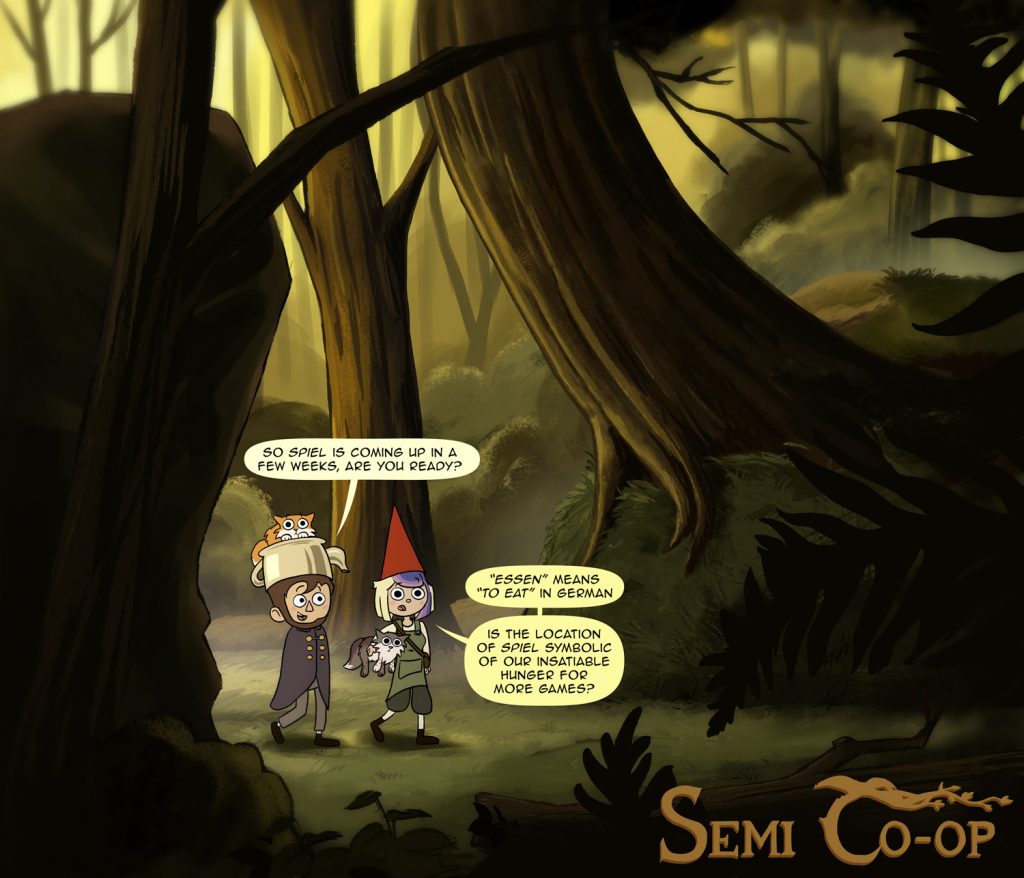